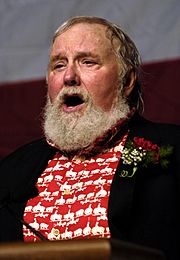 Charles Edward "Charlie" Daniels (October 28, 1936 – July 6, 2020) was an American country singer-songwriter and musician. He played a fiddle and country rock music. His best known song was "The Devil Went Down to Georgia".

Daniels was born in Wilmington, North Carolina. Daniels was married to Hazel Daniels from 1963 until his death. They had a son, Charlie Daniels, Jr., and three grandchildren.

All content from Kiddle encyclopedia articles (including the article images and facts) can be freely used under Attribution-ShareAlike license, unless stated otherwise. Cite this article:
Charlie Daniels Facts for Kids. Kiddle Encyclopedia.