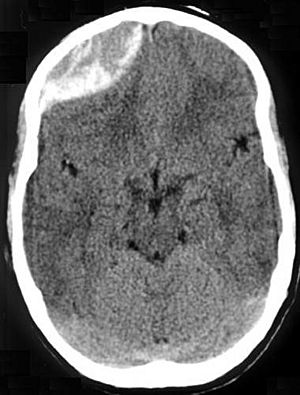 Brain scan of a brain bleed. The light gray area at the top left is blood, which is squeezing the brain (the darker gray area) 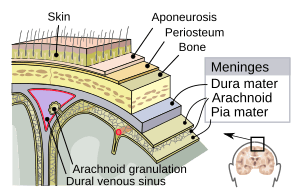 Most brain bleeds happen in the meninges. These are the three layers of the meninges: the pia, arachnoid, and dura mater

The three most common types of bleeding problems in the brain are epidural hematomas, subdural hematomas, and subarachnoid hemorrhages. These happen in different parts of the meninges (the layers that cover the brain).

About 15% to 20% of people with epidural hematomas die from them.

The picture at the top of this page shows an epidural hematoma. The bleeding (shown in light gray) is between the skull (the thick white outside layer) and the rest of the brain (shown in dark gray). 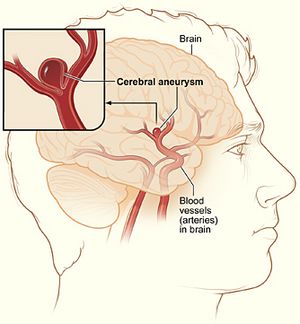 Subdural hematomas can also be chronic. This means they take days or weeks to happen. They are usually caused by injuries to the head that are not very bad. Sometimes, if a person has a vein in their dura that slowly leaks blood every now and then, chronic subdural hematomas can take years to build up.

Subarachnoid hemorrhages can be caused by head injuries. They can also happen when an aneurysm in one of the arachnoid layer's blood vessels bursts and starts bleeding.

All content from Kiddle encyclopedia articles (including the article images and facts) can be freely used under Attribution-ShareAlike license, unless stated otherwise. Cite this article:
Intracranial hemorrhage Facts for Kids. Kiddle Encyclopedia.