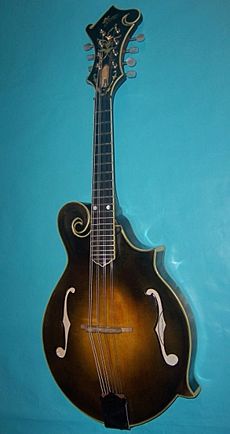 The mandolin is a musical instrument, which literally means, a small soprano member of the lute family. It is played by hitting its strings and sounds similar in tone of a violin or a hammered dulcimer. The most common type of mandolin, which was first designed in Naples, has eight strings. It has a body made of wood and a fingerboard which has frets. 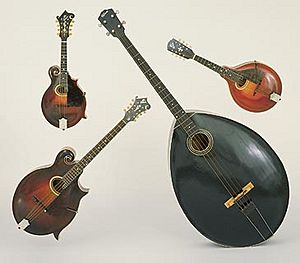 The piccolo or sopranino mandolin is a rare member of the family, tuned one octave above the mandola and one fourth above the mandolin (C4–G4–D5–A5); the same relation as that of the piccolo or sopranino violin to the violin and viola. One model was manufactured by the Lyon & Healy company under the Leland brand. A handful of contemporary luthiers build piccolo mandolins. Its scale length is typically about 9 1⁄2 inches (240 mm). 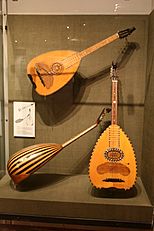 Algerian mandole (flatback) from the side.

The Greek laouto or laghouto (long-necked lute) is similar to a mandocello, ordinarily tuned C3/C2–G3/G2–D3/D3–A3/A3 with half of each pair of the lower two courses being tuned an octave high on a lighter gauge string. The body is a staved bowl, the saddle-less bridge glued to the flat face like most ouds and lutes, with mechanical tuners, steel strings, and tied gut frets. Modern laoutos, as played on Crete, have the entire lower course tuned to C3, a reentrant octave above the expected low C. Its scale length is typically about 28 inches (710 mm). 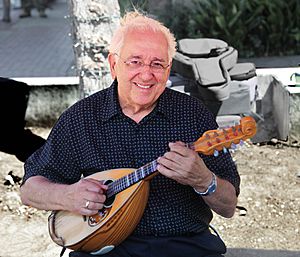 Bowlback mandolins (also known as roundbacks), are used worldwide. They are most commonly manufactured in Europe, where the long history of mandolin development has created local styles. However, Japanese luthiers also make them.

Owing to the shape and to the common construction from wood strips of alternating colors, in the United States these are sometimes colloquially referred to as the "potato bug" or "potato beetle" mandolin.

The Neapolitan style has an almond-shaped body resembling a bowl, constructed from curved strips of wood. It usually has a bent sound table, canted in two planes with the design to take the tension of the eight metal strings arranged in four courses. A hardwood fingerboard sits on top of or is flush with the sound table. Very old instruments may use wooden tuning pegs, while newer instruments tend to use geared metal tuners. The bridge is a movable length of hardwood. A pickguard is glued below the sound hole under the strings. European roundbacks commonly use a 13-inch (330 mm) scale instead of the 13 7⁄8 inches (350 mm) common on archtop Mandolins.

Intertwined with the Neapolitan style is the Roman style mandolin, which has influenced it. The Roman mandolin had a fingerboard that was more curved and narrow. The fingerboard was lengthened over the sound hole for the E strings, the high pitched strings. The shape of the back of the neck was different, less rounded with an edge, the bridge was curved making the G strings higher. The Roman mandolin had mechanical tuning gears before the Neapolitan. 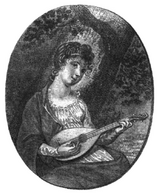 Cremonese mandolin with 4 stings, from an 1805 book by Bartolomeo Bortolazzi.

Lombardic mandolin with 12 strings in 6 courses.

Giovanni Vailati, "Blind mandolinist of Cremona," toured Europe in the 1850s with a six-string mandolin.

Another family of bowlback mandolins came from Milan and Lombardy. These mandolins are closer to the mandolino or mandore than other modern mandolins. They are shorter and wider than the standard Neapolitan mandolin, with a shallow back. The instruments have 6 strings, 3 wire treble-strings and 3 gut or wire-wrapped-silk bass-strings. The strings ran between the tuning pegs and a bridge that was glued to the soundboard, as a guitar's. The Lombardic mandolins were tuned g–b–e′–a′–d″–g″ (shown in Helmholtz pitch notation). A developer of the Milanese stye was Antonio Monzino (Milan) and his family who made them for 6 generations.

Samuel Adelstein described the Lombardi mandolin in 1893 as wider and shorter than the Neapolitan mandolin, with a shallower back and a shorter and wider neck, with six single strings to the regular mandolin's set of 4. The Lombardi was tuned C–D–A–E–B–G. The strings were fastened to the bridge like a guitar's. There were 20 frets, covering three octaves, with an additional 5 notes. When Adelstein wrote, there were no nylon strings, and the gut and single strings "do not vibrate so clearly and sweetly as the double steel string of the Neapolitan."

Brescian mandolins that have survived in museums have four gut strings instead of six. The mandolin was tuned in fifths, like the Neapolitan mandolin.

In his 1805 mandolin method, Anweisung die Mandoline von selbst zu erlernen nebst einigen Uebungsstucken von Bortolazzi, Bartolomeo Bortolazzi popularised the Cremonese mandolin, which had four single-strings and a fixed bridge, to which the strings were attached. Bortolazzi said in this book that the new wire strung mandolins were uncomfortable to play, when compared with the gut-string instruments. Also, he felt they had a "less pleasing...hard, zither-like tone" as compared to the gut string's "softer, full-singing tone." He favored the four single strings of the Cremonese instrument, which were tuned the same as the Neapolitan.

1897 Advertisement for a Lyon and Healy made, Washburn brand mandolin. 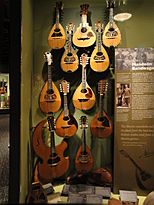 Martin mandolins and Harp mandolin on display at the Martin Guitar Factory.

In the United States, when the bowlback was being made in numbers, Lyon and Healy was a major manufacturer, especially under the "Washburn" brand. Other American manufacturers include Martin, Vega, and Larson Brothers.

In Canada, Brian Dean has manufactured instruments in Neapolitan, Roman, German and American styles but is also known for his original 'Grand Concert' design created for American virtuoso Joseph Brent.

German manufacturers include Albert & Mueller, Dietrich, Klaus Knorr, Reinhold Seiffert and Alfred Woll. The German bowlbacks use a style developed by Seiffert, with a larger and rounder body. 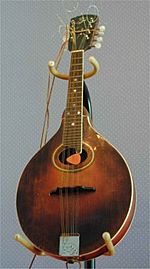 At the very end of the 19th century, a new style, with a carved top and back construction inspired by violin family instruments began to supplant the European-style bowl-back instruments in the United States. This new style is credited to mandolins designed and built by Orville Gibson, a Kalamazoo, Michigan luthier who founded the "Gibson Mandolin-Guitar Manufacturing Co., Limited" in 1902. Gibson mandolins evolved into two basic styles: the Florentine or F-style, which has a decorative scroll near the neck, two points on the lower body and usually a scroll carved into the headstock; and the A-style, which is pear shaped, has no points and usually has a simpler headstock.

These styles generally have either two f-shaped soundholes like a violin (F-5 and A-5), or an oval sound hole (F-4 and A-4 and lower models) directly under the strings. Much variation exists between makers working from these archetypes, and other variants have become increasingly common. Generally, in the United States, Gibson F-hole F-5 mandolins and mandolins influenced by that design are strongly associated with bluegrass, while the A-style is associated other types of music, although it too is most often used for and associated with bluegrass. The F-5's more complicated woodwork also translates into a more expensive instrument.

Internal bracing to support the top in the F-style mandolins is usually achieved with parallel tone bars, similar to the bass bar on a violin. Some makers instead employ "X-bracing," which is two tone bars mortised together to form an X. Some luthiers now using a "modified x-bracing" that incorporates both a tone bar and X-bracing.

Numerous modern mandolin makers build instruments that largely replicate the Gibson F-5 Artist models built in the early 1920s under the supervision of Gibson acoustician Lloyd Loar. Original Loar-signed instruments are sought after and extremely valuable. Other makers from the Loar period and earlier include Lyon and Healy, Vega and Larson Brothers.

The bandolim is a Portuguese variant of the mandolin family. Instruments are flat on top and back.

Flatback mandolins use a thin sheet of wood with bracing for the back, as a guitar uses, rather than the bowl of the bowlback or the arched back of the carved mandolins.

Like the bowlback, the flatback has a round sound hole. This has been sometimes modified to an elongated hole, called a D-hole. The body has a rounded almond shape with flat or sometimes canted soundboard.

The type was developed in Europe in the 1850s. The French and Germans called it a Portuguese mandolin, although they also developed it locally. The Germans used it in Wandervogel.

The bandolim is commonly used wherever the Spanish and Portuguese took it: in South America, in Brazil (Choro) and in the Philippines.

In the early 1970s English luthier Stefan Sobell developed a large-bodied, flat-backed mandolin with a carved soundboard, based on his own cittern design; this is often called a 'Celtic' mandolin.

American forms include the Army-Navy mandolin, the flatiron and the pancake mandolins.

The tone of the flatback is described as warm or mellow, suitable for folk music and smaller audiences. The instrument sound does not punch through the other players' sound like a carved top does.

Joseph Brent and Alon Sariel with their double-chamber mandolins.

Back in the early 1900s, mandolinist Ginislao Paris approached Luigi Embergher to build custom mandolins. The sticker inside one of the four surviving instruments indicates the build was called after him, the Sistema Ginislao Paris). Paris' round-back double-top mandolins use a false back below the soundboard to create a second hollow space within the instrument.

Modern mandolinists such as Avi Avital and Joseph Brent use instruments customized, either by the luthier's choice or at the request of player. Joseph Brent's mandolin, made by Brian Dean also uses what Brent calls a false back. Brent's mandolin was the luthier's solution to Brent's request for a loud mandolin in which the wood was clearly audible, with less metallic sound from the strings. The type used by Avital is variation of the flatback, with a double top that encloses a resonating chamber, sound holes on the side, and a convex back. It is made by one manufacturer in Israel, luthier Arik Kerman. Other players of Kerman mandolins include Alon Sariel, Jacob Reuven, and Tom Cohen.

The bulge on the instrument's back side is visible in this photo of a Vega cylinder-back mandolin.

Other American-made variants include the mandolinetto or Howe-Orme guitar-shaped mandolin (manufactured by the Elias Howe Company between 1897 and roughly 1920), which featured a cylindrical bulge along the top from fingerboard end to tailpiece and the Vega mando-lute (more commonly called a cylinder-back mandolin manufactured by the Vega Company between 1913 and roughly 1927), which had a similar longitudinal bulge but on the back rather than the front of the instrument.

The mandolin was given a banjo body in an 1882 patent by Benjamin Bradbury of Brooklyn and given the name banjolin by John Farris in 1885. Today banjolin describes an instrument with four strings, while the version with the four courses of double strings is called a mandolin-banjo.

A resonator mandolin or "resophonic mandolin" is a mandolin whose sound is produced by one or more metal cones (resonators) instead of the customary wooden soundboard (mandolin top/face). Historic brands include Dobro and National.

As with almost every other contemporary string instrument, another modern variant is the electric mandolin. These mandolins can have four or five individual or double courses of strings.

They have been around since the late 1920s or early 1930s depending on the brand. They come in solid body and acoustic electric forms.

Instruments have been designed that overcome the mandolin's lack of sustain with its plucked notes. Fender released a model in 1992 with an additional string (a high a, above the e string), a tremolo bridge and extra humbucker pickup (total of two). The result was an instrument capable of playing heavy metal style guitar riffs or violin-like passages with sustained notes that can be adjusted as with an electric guitar.

All content from Kiddle encyclopedia articles (including the article images and facts) can be freely used under Attribution-ShareAlike license, unless stated otherwise. Cite this article:
Mandolin Facts for Kids. Kiddle Encyclopedia.