Lewis County is a county located in the U.S. state of Tennessee. As of the 2010 census, the population was 12,161. Its county seat is Hohenwald. The county is named for explorer Meriwether Lewis, who died and was buried at Grinder's Stand near Hohenwald in 1809. 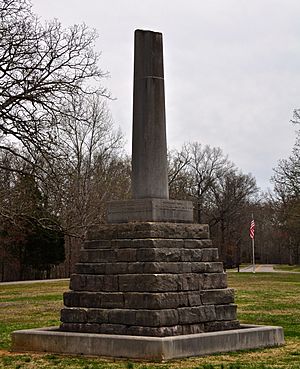 Lewis County was formed in 1843 from parts of Perry, Hickman, Lawrence, Maury and Wayne counties. It was named for explorer Meriwether Lewis of the Lewis and Clark expedition. Lewis's grave is located at the geographic center of the county. The bill for its creation was proposed by Powhatan Gordon in the Tennessee State Senate.

On October 7, 2009, a ceremony was held at the cemetery to commemorate the bicentennial of Lewis's death. A bust of Lewis was presented to the National Park Service, which manages the site. 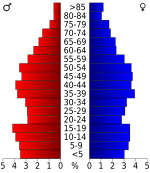 All content from Kiddle encyclopedia articles (including the article images and facts) can be freely used under Attribution-ShareAlike license, unless stated otherwise. Cite this article:
Lewis County, Tennessee Facts for Kids. Kiddle Encyclopedia.