Lawrence County is a county located in the U.S. state of Tennessee. As of the 2010 census, the population was 41,869. Its county seat and largest city is Lawrenceburg.

Created by an act of the Tennessee General Assembly on October 21, 1817, Lawrence County was formed from lands previously part of Hickman and Giles counties.

It was named in honor of Captain James Lawrence (1781–1813), who while commanding the USS Chesapeake in an 1813 battle with the Royal Navy frigate HMS Shannon, issued his famous command: "Don't give up the ship! Blow her up." His men did anyway and Lawrence died of wounds.

Lawrenceburg was chosen as the county seat in 1819 as it was near the center of the county and because Jackson's Military Road ran just east of the town. In April 1821, the road was redirected through the center of the Lawrenceburg. The military road, the main route from New Orleans, Louisiana, to Nashville, Tennessee, played a significant role in the county's development.

An early resident was David Crockett, who served as one of the county's first commissioners and justices of the peace. Crockett lived in the county for several years and ran a water-powered grist mill, powder mill and distillery on Shoal Creek, (originally called the Sycamore River) where David Crockett State Park is now located.

In the early 1870s, many German Catholics moved into the area, including skilled tradesmen. After the arrival of the railroad in 1883, the county became a major source of iron ore.

Between 1908 and 1915, there was an influx of settlers from Alabama. Most were cotton growers or worked in the timber industry. Logging soon declined, since the forests were not replanted after trees were harvested; however, cotton continued to be a major crop until the 1960s.

In 1944, Amish people moved to the area and established a community in the north of the county. The Old Order Amish community has now become a tourist attraction.

In June 2010, the Tennessee Commission of Indian Affairs gave official recognition to six Native American groups, including the Central Band of Cherokee, also known as the Cherokee of Lawrence County. The recognition of these tribes at a state level has stirred much controversy among federally recognized Indian tribes, who claim the recognition by a state is unconstitutional and threatens the status of existing tribes. 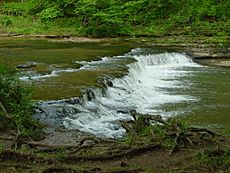 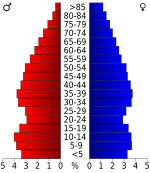 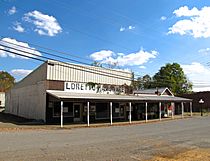 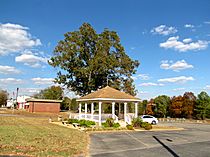 All content from Kiddle encyclopedia articles (including the article images and facts) can be freely used under Attribution-ShareAlike license, unless stated otherwise. Cite this article:
Lawrence County, Tennessee Facts for Kids. Kiddle Encyclopedia.