Lauderdale County is a county located in the northwestern corner of the U.S. state of Alabama. As of the 2010 census the population was 92,709. Its county seat is Florence. Its name is in honor of Colonel James Lauderdale, of Tennessee.

Lauderdale is part of the Florence-Muscle Shoals, AL Metropolitan Statistical Area, also known as "The Shoals".

Lauderdale County was named in honor of Col. James Lauderdale who was born in Virginia about 1780. In the early 19th century, Lauderdale, who moved to West Tennessee, became a major in General John Coffee's cavalry of volunteers. Later promoted to Lieutenant Colonel, he commanded a brigade of mounted riflemen, serving under Andrew Jackson in many battles against the Indians. According to reliable historians, Col. Lauderdale did not die in the Battle of New Orleans, but was wounded in the Battle of Talladega and died on December 23, 1814, seventeen days before Jackson's crushing defeat of the British at New Orleans. Several towns and counties in the southern states were named in his honor, though it is said that he never set foot in Lauderdale County.

Lauderdale County was established in 1818, a year before Alabama became a state. Florence, the county seat of Lauderdale County, was also established in 1818. At this time a group of investors, under the name of Cypress Land Company purchased from the government 5,515 acres (22.32 km2) of land consisting of the original town site. Other towns in Lauderdale County competing for early settlers because of their proximity to the river were Savage's Spring, nine miles (14 km) below Florence and Waterloo, some 20 miles (32 km) downriver.

Among the older settlements in the county is Center Star, located between Killen and Rogersville. This area was once claimed by both the Chickasaws and Cherokees, necessitating a cession of territory from each tribe before the settlement could be established. At one time, the remains of an old Indian village could be seen southwest of Center Star. Other old settlements included Middleton and Elgin, the latter known first as Ingram's Elgin Cross Roads.

Rogersville, lying some 23 miles (37 km) to the east of Florence, was named for John Rogers, an Indian trader, whose sons were fast friends of the great Sam Houston. The late Will Rogers is said to have been a descendant of this same family. An early ferry that operated for many years was Lamb's Ferry near Rogersville.

Lexington, Springfield, and Anderson lie to the north of the Lee Highway, the town of Lexington being a part of the territory once claimed by the Cherokee. Many of the settlers of that area came from Tennessee and the Carolinas. The first post office of record at Lexington was on the Loretto Road, north of town, in 1880. Mail at that time was brought in from Loretto, Tennessee, by horseback and carts.

The town of St. Florian was established in 1872 on the Jackson Highway and named by its German Catholic founders for their patron saint.

Lauderdale County is home to the W. C. Handy Home and Museum and the Rosenbaum House. 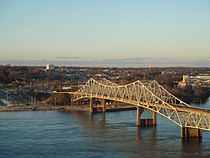 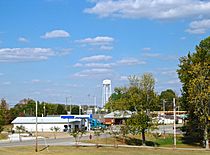 All content from Kiddle encyclopedia articles (including the article images and facts) can be freely used under Attribution-ShareAlike license, unless stated otherwise. Cite this article:
Lauderdale County, Alabama Facts for Kids. Kiddle Encyclopedia.