Loretto began as a stagecoach station known as "Glen Rock" in the early 19th century. In 1870, a number of German Catholic immigrants settled in the Loretto area, and a new city was established shortly afterward. Some sources suggest the name "Loretto" was inspired by the Loreto region in Italy, while others say the city was named for a sainted nun. The congregation the immigrants formed, the Sacred Heart Church of Jesus, still exists, and their church (built in 1912) is listed on the National Register of Historic Places. With the arrival of the railroad in the 1880s, Loretto thrived as a lumber town.

Other historic buildings include the Bank of Loretto building, which was built in the 1920s. The Bank of Loretto building was renovated in 2013 and now houses Nana's Pizzeria. This historic building was once a cornerstone to a thriving town. Next door to the old Loretto Bank building was Weathers Store and Myers Store. They sold general merchandise to generations of families. During the early 20th century, these properties had living arrangements above the businesses. The Old Jackson Highway came right through Loretto. Businesses located in this district included a doctor's office, cobbler's shop, cafes, hotels, and a funeral home. There was also a stage coach stop, and then later on a bus depot. The historic downtown area began to decline following the construction of U.S. Route 43 to the east of the district in the 1940s, when its commercial activity shifted to the new highway. Like many Southern towns, Loretto is applying for grants to help revise the older historic district. 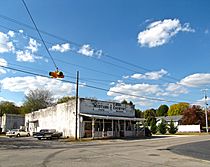 There were 681 households out of which 29.5% had children under the age of 18 living with them, 58.3% were married couples living together, 10.4% had a female householder with no husband present, and 28.5% were non-families. 24.8% of all households were made up of individuals and 13.8% had someone living alone who was 65 years of age or older. The average household size was 2.44 and the average family size was 2.91.

All content from Kiddle encyclopedia articles (including the article images and facts) can be freely used under Attribution-ShareAlike license, unless stated otherwise. Cite this article:
Loretto, Tennessee Facts for Kids. Kiddle Encyclopedia.