Lawrenceburg is a city in Lawrence County, Tennessee, United States, on the banks of Shoal Creek. (originally called (Sycamore River) According to the U.S. Census Bureau, the city's population was 10,428 in 2010, with an estimate of over 14,000 as of the end of 2013. Lawrenceburg is the county seat of Lawrence County. The city is named after War of 1812 American Navy officer James Lawrence.

Located around 80 miles (130 km) southwest of Nashville at the junction of U.S. Routes 43 and 64, Lawrenceburg is called the "Crossroads of Dixie." With a population nearing 15,000 as of 2015, it has become a destination city in south-central Tennessee.

According to a recent theory, the Lawrenceburg area is the likely site of "Chicasa" — the place where Spanish explorer Hernando de Soto and his men wintered in 1540-41 (earlier theories have suggested this campsite to have been in northern Mississippi). The Cherokee sold the area to the USA in 1806.

Upon moving from East Tennessee in the early 19th century, around 1817, David Crockett served as a justice of the peace, a colonel of the militia, and a state representative. David Crockett established a powder mill on Shoal Creek originally called the (Sycamore River). this area is now known as his namesake, David Crockett State Park. Crockett was elected as a commissioner and served on the board that placed Lawrenceburg four miles (6 km) west of the geographic center of Lawrence County. Crockett was opposed to the city being located in its current location, largely out of fear of flooding. He and his family lived in Lawrenceburg for several years before moving to West Tennessee after a flood destroyed his mill.

After World War II, the Murray Ohio Manufacturing Company, a U.S. producer of bicycles and outdoor equipment, moved its manufacturing operations to Lawrenceburg, building a new factory and assembly plant. Over the next several decades, the Murray factory grew to be one of the largest in the United States: 42.7 acres (173,000 m2) under roof.

A 100-year flood struck Lawrenceburg in July 1998. Two people were killed during the flood on Shoal Creek.

The city of Lawrenceburg has a total area of 12.6 square miles (33 km2). It is the largest city on the state line between Chattanooga and Memphis. Lawrenceburg is located on the southern Highland Rim,Lawrence County sets on top of a large Mountain plateau of the Appalachian Mountain range with elevations ranging between 810 feet (250 m) to over 1,120 feet (340 m). Map of the Appalachian Mountain Range. http://www.umamn.org/resources/appalachia/ 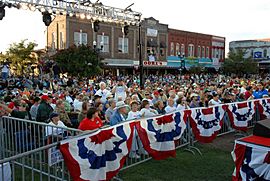 Lawrence County is the birthplace of Southern Gospel Music and visitors to historic downtown Lawrenceburg can see where it all began at the James D. Vaughan Museum on the Square.

The downtown area has a statue of David Crockett, a replica of Crockett's office, and one of the only two Mexican-American War monuments in the U.S.

All content from Kiddle encyclopedia articles (including the article images and facts) can be freely used under Attribution-ShareAlike license, unless stated otherwise. Cite this article:
Lawrenceburg, Tennessee Facts for Kids. Kiddle Encyclopedia.