James Lawrence (October 1, 1781 – June 4, 1813) was an officer of the United States Navy. During the War of 1812, he commanded USS Chesapeake in a single-ship action against HMS Shannon commanded by Philip Broke. He is probably best known today for his last words, "Don't give up the ship!", spoken during the capture of Chesapeake. The quotation is still a popular naval battle cry, and was invoked by Oliver Hazard Perry's personal battle flag, adopted to commemorate his dead friend.

Lawrence was born on October 1, 1781, the son of John and Martha (Tallman) Lawrence, in Burlington, New Jersey, but raised in Woodbury. His mother died when he was an infant, and his Loyalist father fled to Canada during the American Revolution, leaving his half-sister to care for the young Lawrence. He attended Woodbury Academy. Though Lawrence studied law, he entered the United States Navy as a midshipman in 1798.

During the Quasi-War with France, he served on USS Ganges and the frigate USS Adams in the Caribbean. He was commissioned a lieutenant on April 6, 1802, and served aboard USS Enterprise in the Mediterranean, taking part in a successful attack on enemy craft on June 2, 1803.

In February 1804, he was second in command during the expedition to destroy the captured frigate USS Philadelphia. Later in the conflict he commanded Enterprise and a gunboat in battles with the Tripolitans. He was also First Lieutenant of the frigate Adams and, in 1805, commanded the small Gunboat No. 6 during a voyage across the Atlantic to North Africa.

Although Gunboats No. 2 through 10 (minus No. 7) arrived in the Mediterranean too late to see action, they remained there with Commodore Rodgers's squadron until summer 1806, at which time they sailed back to the United States. On June 12, 1805, Gunboat No. 6 encountered a Royal Navy vessel that impressed three seamen.

Subsequently, Lieutenant Lawrence commanded the warships USS Vixen, USS Wasp and USS Argus. In 1810, he also took part in trials of an experimental spar torpedo. Promoted to the rank of Master Commandant in November 1810, he took command of the sloop of war USS Hornet a year later and sailed her to Europe on a diplomatic mission. From the beginning of the War of 1812, Lawrence and Hornet cruised actively, capturing the privateer Dolphin in July 1812. Later in the year Hornet blockaded the British sloop HMS Bonne Citoyenne at Bahia, Brazil, and on February 24, 1813 captured HMS Peacock. 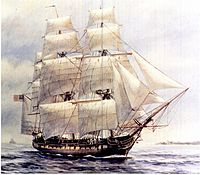 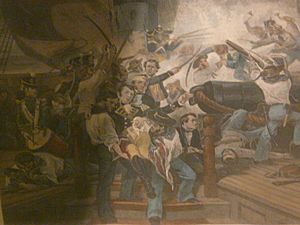 Artist representation of the "Don't Give Up the Ship" moment

Upon his return to the United States in March, Lawrence learned of his promotion to captain. Two months later he took command of the frigate Chesapeake, then preparing for sea at Boston. He left port on June 1, 1813 and immediately engaged the blockading Royal Navy frigate Shannon in a fierce battle. Although slightly smaller, the British ship disabled Chesapeake with gunfire within the first few minutes. Captain Lawrence, mortally wounded by small arms fire, ordered his officers, "Don't give up the ship. Fight her till she sinks" or "Tell the men to fire faster! Don't give up the ship." Men carried him below, and his crew was overwhelmed by a British boarding party shortly afterward. James Lawrence died of his wounds on June 4, 1813, while his captors directed Chesapeake to Halifax, Nova Scotia.

After Lawrence's death was reported to his friend and fellow officer Oliver Hazard Perry, he ordered a large blue battle ensign, stitched with the phrase "DONT GIVE UP THE SHIP" [sic] in bold white letters. The Perry Flag was displayed on his flagship during a victorious engagement against the British on Lake Erie in September 1813. The original flag is displayed in the Naval Academy Museum and a replica is displayed in Memorial Hall at the United States Naval Academy in Annapolis, Maryland. A replica is also on view at Perry's Victory and International Peace Memorial, on South Bass Island, Ohio. 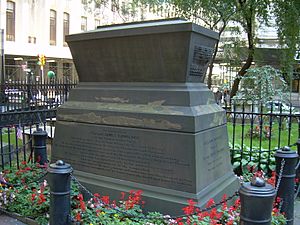 Lawrence was buried with military honors at present-day CFB Halifax, Nova Scotia, but reinterred at Trinity Church Cemetery in New York City. He was survived by his wife, Julia (Montaudevert) Lawrence, who lived until 1865, and their two-year-old daughter, Mary Neill Lawrence. In 1838 Mary married a Navy officer, Lt. William Preston Griffin.

On July 4, 1813, Lawrence was posthumously elected to membership in the New York Society of the Cincinnati.

He was honored with a Congressional Gold Medal and the Thanks of Congress.

Many places are named for Captain Lawrence, including:

His birthplace of Burlington, New Jersey, has a Captain James Lawrence Elementary School.

In addition, the U.S. Navy has had named five ships USS Lawrence.

All content from Kiddle encyclopedia articles (including the article images and facts) can be freely used under Attribution-ShareAlike license, unless stated otherwise. Cite this article:
James Lawrence Facts for Kids. Kiddle Encyclopedia.