Lawrenceville was incorporated by an act of the Georgia General Assembly on December 15, 1821. This makes Lawrenceville the second oldest city in the metropolitan Atlanta area. The city is named after Commodore James Lawrence, commander of the frigate Chesapeake during the War of 1812. Lawrence, a native of New Jersey, is probably best known today for his dying command, "Don't give up the ship!" William Maltbie, the town's first postmaster, suggested the name of "Lawrenceville".

In 1821, a permanent site for the county courthouse was selected and purchased, the four streets bordering the square were laid out along with other streets in the village, and a public well was dug. Major Grace built the first permanent courthouse, a brick structure, in 1823-24 for a cost of $4,000. The courthouse presently on the square was constructed in 1885.

Courtland Winn served two terms as mayor starting in 1884 when he was 21 years old.

The two most famous people born in Lawrenceville gained their fame elsewhere. Charles Henry Smith, born in 1826, left as a young man and lived most of his life in other Georgia towns. During the Civil War he wrote humorous pieces for Atlanta newspapers under the name Bill Arp. He has been described as the South's most popular writer of the late 19th century, though he is not much read today. Ezzard Charles, born in 1921, grew up in Cincinnati, where opportunities for African-Americans were far better at the time than in the Deep South. He eventually became the World Heavyweight boxing champion by defeating Joe Louis by unanimous decision on September 27, 1950.

Another resident, Oliver Hardy, became a world-renowned comic actor, a member of the film duo Laurel and Hardy from the 1920s to the 1940s. He lived as a child in downtown Lawrenceville around 1900. But his stay was brief, because his family moved often within Georgia.

Since 1988, Lawrenceville has been the headquarters of the Presbyterian Church in America. 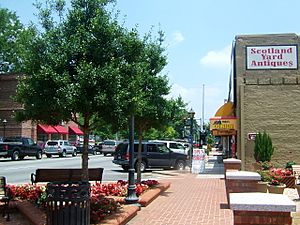 Downtown Lawrenceville (as of June 2006)

Currently, Lawrenceville has limited walkability options available. However, in October 2017 plans were announced for the formation of a 2.2 mile linear park that will connect Georgia Gwinnett College with the downtown district. 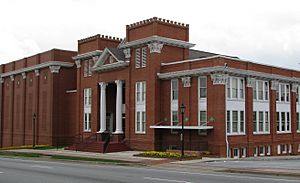 Historically significant buildings in downtown Lawrenceville include the Gwinnett Historic Courthouse and Lawrenceville Female Seminary. Also downtown are various landmarks and antique locations. Lawrenceville's revitalization plan was strengthened in 2005 when the city crafted a unique partnership with the Aurora Theatre (Gwinnett county's only professional theatre), which relocated from the nearby town of Duluth to a permanent site in downtown Lawrenceville in May 2007 for the opening of its eleventh season. The Aurora Theatre also conducts Lawrenceville Ghost Tours—a 90-minute walking tour of the historic downtown area led by professional storytellers. Ghost tour guides recount town lore and legends including Lawrenceville's role in the trial of Larry Flynt and the kidnapping of Barbara Jane Mackle.

Scientific Atlanta, now owned by Cisco Systems, is based near Lawrenceville.

Atlanta Biologicals is located in Lawrenceville.

The following is a list of schools with a Lawrenceville mailing address, with its high school cluster in parenthesis.

Within Lawrenceville are two public colleges:

All content from Kiddle encyclopedia articles (including the article images and facts) can be freely used under Attribution-ShareAlike license, unless stated otherwise. Cite this article:
Lawrenceville, Georgia Facts for Kids. Kiddle Encyclopedia.