Portions of Forsyth and Fulton counties also have Suwanee and its ZIP Code (30024) as a mailing address.

Suwanee, as did most towns in Georgia, started out as a Native American village. It was built on the Chattahoochee River, where societies flourished. The city of Suwanee itself was established and officially recognized by the U.S. government in 1837 upon the erection of a post office. In 1871, the Georgia Air Line Railroad was built through Suwanee, and in 1880 the Rhodes House hotel was built to house passengers of the railroad. This was instrumental in bringing people through the town and helped to generate trade and economic activity. In 1881, a fire burned down all of the buildings on Main Street except for one. From 1880 to 1920, the population saw almost no increase, shifting from 216 people to 241 over the course of 40 years. As of 2015[update], the population of Suwanee was over 18,000

Beginning in 1933 and ending in 1936, the now heavily traveled Buford Highway was constructed through Suwanee. In 1960, Interstate 85 was built to extend to just south of Suwanee, where it ended at the time. Throughout the last 100 years, several primary education schools have opened in Suwanee, including North Gwinnett High School and Suwanee Elementary School. The first known date for Suwanee High School was 1880, when it was a one-room school house. The first city hall was built in the early 1960s, and the second city hall was built in 1997. In 2005, Town Center was constructed and finished in 2009, at which time the city hall moved to it, where it currently resides. In 2003, Suwanee was named a City of Excellence by the Georgia Municipal Association and Trend Magazine. 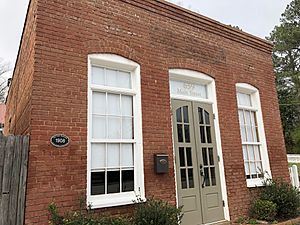 The most widely known park in Suwanee is the Town Center Park, a 10-acre (4.0 ha) park on Buford Highway and Lawrenceville-Suwanee Road. It is the venue for the community's special events, and contains an amphitheater that holds up to 1,000 audience members where numerous concerts and other various performances are held.

The Town Center Park has Gwinnett County's largest interactive fountain called the "Big Splash". The fountain has 43 jets and uses 1,400 US gallons (5,300 l; 1,200 imp gal) of water each minute. The water is recycled.

The park lies next to the Suwanee Public Library.

The Suwanee Creek Greenway is a hard-surfaced multipurpose 4-mile (6.4 km) trail with wooded areas and wildlife habitat. It is favored by walkers, joggers, bikers, etc.

Playtown Suwanee is a super playground built by 1,200 volunteers in 2004. It is known as "the playground my mommy and daddy built."

The nearest air service is provided by Hartsfield–Jackson Atlanta International Airport, which is south of Atlanta. The nearest regional airport is Gwinnett County Airport.

Suwanee was the practicing home of the Atlanta Falcons football team from 1979 to 2001.

All content from Kiddle encyclopedia articles (including the article images and facts) can be freely used under Attribution-ShareAlike license, unless stated otherwise. Cite this article:
Suwanee, Georgia Facts for Kids. Kiddle Encyclopedia.