Gwinnett County is a suburban county of Atlanta in the north central portion of the U.S. state of Georgia. In 2020, the population was 957,062, making it the second-most populous county in Georgia (after Fulton County). Its county seat is Lawrenceville. The county is named for Button Gwinnett, one of the signatories of the Declaration of Independence.

Gwinnett County is included in the Atlanta-Sandy Springs-Roswell, GA Metropolitan Statistical Area. It is located about 10 miles northeast of Atlanta's city limits.

Created in 1818 by an act of the Georgia General Assembly, Gwinnett County was formed from parts of Jackson County (formerly part of Franklin County) and from lands gained through the cession of Indian lands. Named for Button Gwinnett, one of the signatories of the Declaration of Independence, the first county court was held at the home of Elisha Winn, and the county seat was placed at Lawrenceville.

In 1861, all three of Gwinnett County’s representatives at the Georgia Constitutional Convention (1861) in Milledgeville voted against secession. Towards the end of the war, several skirmishes took place in Gwinnett County as part of the Atlanta Campaign.

The northeastern part of Gwinnett County was removed to form a part of the new Barrow County in 1914. 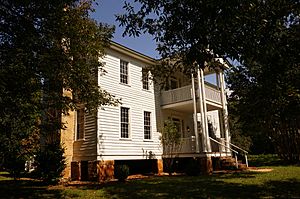 It is located along the Eastern Continental Divide. A portion of the county to the northwest is a part of the Chattahoochee River National Recreation Area chain.

The regional reservoir, Lake Lanier, at the extreme north of the county, is the central cause to the Tri-state water dispute.

Gwinnett County is often cited as one of the counties in the US that has demographically changed the most rapidly. As recently as 1990, over 90% of Gwinnett County's population was white. By 2007, the county was considered majority-minority.

The rap group Migos hails from Gwinnett County. Migos won the 2015 YouTube Music Award, as well as several other notable entertainment television awards. Net worth in 2015 was reported to be 4.2 million (USD).

Minor-league affiliates of the NHL Boston Bruins and the MLB Atlanta Braves play home games and talent scout in the area.

In 2016, the Georgia Swarm of the National Lacrosse League relocated from Minnesota and began playing games at Infinite Energy Arena. The team won the league championship in 2017.

Georgia Force of Arena Football League had also played at Arena at Gwinnett Center before the team folded in 2012.

Gwinnett County Public Schools operates the public schools for residents in Gwinnett County, with the exception of residents inside the Buford city limits, which are served by the Buford City School District. There are 143 schools in the district—21 high schools, 29 middle schools, 80 elementary schools and 13 specialty schools, making it the largest school district in Georgia.

All content from Kiddle encyclopedia articles (including the article images and facts) can be freely used under Attribution-ShareAlike license, unless stated otherwise. Cite this article:
Gwinnett County, Georgia Facts for Kids. Kiddle Encyclopedia.