Kids Encyclopedia Facts
This page is about the city in Gwinnett and Hall Counties. For the community in DeKalb County, see Buford Highway.

The city was founded in 1872 after a railroad was built in the area connecting Charlotte, North Carolina, with Atlanta. Buford was named after Algernon Sidney Buford, who at the time was president of the Atlanta and Richmond Air-Line Railway. The city's leather industry, led by the Bona Allen Company, as well as its location as a railway stop, caused the population to expand during the early 1900s until after the Great Depression had ended.

The city operates its own school district, the Buford City School District, and has been the birthplace and home of several musicians and athletes. Various tourist locations, including museums and community centers, the largest mall in the state of Georgia, the Mall of Georgia, and Lake Lanier Islands are in the Buford region.

Buford appears in historical records beginning in the early 19th century. The area that is now Buford was originally part of Cherokee territory. Despite the treaty in 1817 that ceded the territory to the United States and Gwinnett County's legislative establishment in 1818, the area was still largely inhabited by the Cherokee until the 1830s. The first non-Native Americans moved to the Buford area in the late 1820s or early 1830s, although the Buford area was not largely settled by them until the 1860s.

During the post-Civil War construction of the extended Richmond and Danville Railroad System in 1865, railroad stockholders Thomas Garner and Larkin Smith purchased land around the railroad's right-of-way and began developing the city of Buford. The city was named after Algernon Sidney Buford, who was president of the Atlanta and Richmond Air-Line Railway during the railroad's construction. The town began rapidly expanding around the railway after its completion in 1871, and it was incorporated as the Town of Buford on August 24, 1872, and renamed the City of Buford in 1896. 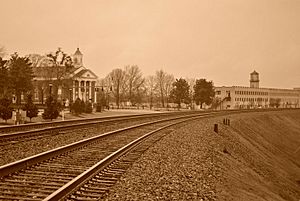 The Bona Allen Shoe and Horse Collar Factory is listed on the National Register of Historic Places.

In the late 1800s and early 1900s Buford became widely known for its leather production, becoming prominently associated with the leather industry and earning the nickname "The Leather City". Buford became a large producer of leather products, including saddles, horse collars, bridles, and shoes. Buford's leather industry began with a leatherworker named R.H. Allen opening a harness shop and tannery in 1868, three years before the completion of the railway and the founding of Buford. R.H. Allen's brother Bona Allen moved to Buford from Rome, Georgia, in 1872 and founded the Bona Allen Company the following year. The leather industry quickly became the city's largest industry despite setbacks from several fires, including a fire in 1903 that destroyed the buildings of several businesses and a fire in 1906 that destroyed a straw storehouse and nearly destroyed the city's harness and horse collar factory.

Bona Allen saddles were available through the Sears mail order catalog, and many Hollywood actors used saddles made by the Bona Allen Company, including cowboy actors Gene Autry, the cast of Bonanza, and Roy Rogers, who used a Bona Allen saddle on his horse Trigger. A statue of Roy Rogers and a Bona Allen saddle-maker saddling Trigger is located in downtown Buford. The Bona Allen Company thrived during the Great Depression in the 1930s, likely as a result of the Depression forcing farmers to choose horses over expensive tractors, thereby increasing the demand for saddles, collars, bridles, and other leather products. 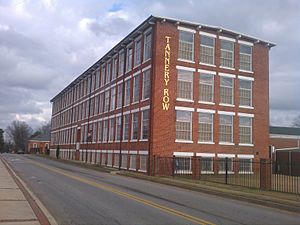 The Bona Allen Company constructed Tannery Row in downtown Buford as a shoe factory in 1919. After a brief employee strike the shoe factory was closed in 1942, although it was briefly reopened by the request of the federal government during World War II to make footwear for the military. Afterwards, the factory closed in 1945. In 2003 Tannery Row became home to the Tannery Row Artist Colony, which houses galleries and studios for artists.

Buford receives rainfall distributed fairly evenly throughout the year as typical of southeastern U.S. cities, with February on average having the highest average precipitation at 5.3 inches (130 mm), and April typically being the driest month with 3.7 inches (94 mm).

There were 4,016 households, out of which 33.9% had children under the age of 18 living with them, 45.7% were married couples living together, 15.3% had a female householder with no husband present, and 31% were non-families. 28.3% of all households were made up of individuals, and 14.6% had someone living alone who was 65 years of age or older. The average household size was 2.74 and the average family size was 3.35. 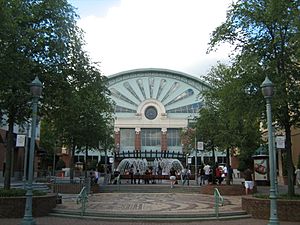 The Mall of Georgia at 3333 Buford Drive

Buford has several walking trails throughout the city; over 7 miles (11 km) of trails are accessible from both the Gwinnett Environmental & Heritage Center and the Mall of Georgia as well as walking trails at Bogan and Buford Dam parks. Bogan Park also has several baseball fields and playgrounds as well as the Bogan Park Community Center and Family Aquatics Center. Buford Dam Park is next to Lake Lanier and has areas for swimming and other recreational activities. In addition to the parks run by Gwinnett County there are five city parks located throughout Buford, and a community center, which was completed in early 2012.

The southern part of Lake Sidney Lanier and the Lake Lanier Islands are also located in Buford.

The Mall of Georgia is the largest mall in Georgia and the 36th largest in the United States, with over 200 stores and a 20 Regal Cinema and IMAX Theater. While outside the official Buford city limits, the mall uses Buford as its mailing address.

The Gwinnett Environmental & Heritage Center is a museum and cultural center completed in August 2006 and is located in Buford. The center was created to educate children about both water and environmental resources as well as Gwinnett's cultural heritage, including the county's Cherokee and Creek cultures. The Chesser-Williams House, a historic home which is believed to predate the 1850s and one of the oldest wooden-frame houses in Gwinnett county, was moved to the museum to become part of the museum's cultural exhibits.

Buford, as with the rest of Gwinnett County, has a sales tax of 6%, which is a combination of the 4% state sales tax and a 2% local tax. In 2008, CNN Money ranked Buford as number 3 in its annual "100 best places to live and start a business" list.

In the late 1800s and early 1900s, Buford's economy was centered on both its location as a railway stop and its leather industry, until demand for leather declined and other transportation options became more readily available over the course of the 1900s, and these industries were no longer a viable part of Buford's economy by the 1980s.

According to the U.S. Census's American Community Survey 2007–2011 5-year estimate, around 65% of Buford's population that are 16 years or older are in the labor force. Of these, around 59% are employed, and 6% are unemployed. The power tool manufacturer Makita operates a factory in Buford with 400 employees. The North American division of Takeuchi Manufacturing was located in Buford from 1999 until 2006, when the company moved to a larger facility in Pendergrass, Georgia.

The Buford-Sugar Hill Branch of the Gwinnett County Public Library is located in Buford.

Two major interstate highways pass through Buford: Interstate 85 and Interstate 985 both travel through the city in a general northeast-southwest direction. Buford is Exit 115 on I-85 and Exit 4 on I-985. Georgia State Route 20 travels through Buford in a general northwest-southeast direction. U.S. Route 23 travels northeast into Buford before first merging with State Route 20 towards the southeast and then with I-985 towards the northeast.

The nearest airport is the Gwinnett County Airport in the city of Lawrenceville, a small public airport with a single asphalt runway 14 miles (23 km) from the Buford. The closest major airports are Hartsfield–Jackson Atlanta International Airport, which is 48 miles (77 km) from Buford and Athens Ben Epps Airport, which is 53 miles (85 km).

A portion of the under-construction Ivy Creek Greenway runs through the city.

Buford has been both the birthplace and hometown of a number of notable individuals, including notable athletes and musicians. Due to its proximity to the Atlanta Falcons training facility in Flowery Branch, Georgia Buford is home to several Atlanta Falcons players, who have also trained in and around Buford. Many of Buford High School's alumni have also played professional sports.

All content from Kiddle encyclopedia articles (including the article images and facts) can be freely used under Attribution-ShareAlike license, unless stated otherwise. Cite this article:
Buford, Georgia Facts for Kids. Kiddle Encyclopedia.