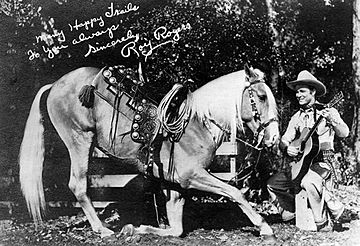 Golden Cloud made an early appearance as the mount of Maid Marian, played by Olivia de Havilland in The Adventures of Robin Hood (1938). A short while later, when Roy Rogers was preparing to make his first movie in a starring role, he was offered a choice of five rented "movie" horses to ride and chose Golden Cloud. Rogers bought him eventually in 1943 and renamed him Trigger for his quickness of both foot and mind. Trigger learned 150 trick cues and could walk 50 ft (15 m) on his hind legs (according to sources close to Rogers). They were said to have run out of places to cue Trigger. Trigger became such a ham that as soon as he heard applause, he would start bowing and ruin that trick. He could sit in a chair, sign his name "X" with a pencil, and lie down for a nap and cover himself with a blanket. Roger's most carefully guarded trade secret was to get Trigger housebroken. "Spending as much time as he does in hotels, theaters, and hospitals, this ability comes in might handy and it's conceded by most trainers to be Trigger's greatest accomplishment." —Glenn Randall, wrangler with Hudkins Stables.

His horse was so important to Rogers that when he purchased a "Best Wishes for the New Year" advertisement in Variety, he signed it "Roy Rogers and Trigger". Trigger was ridden by Rogers in many of his motion pictures, becoming much loved by the youthful audience that saw him on film and in Rogers' 1950s television series with his wife, Dale Evans, who rode her trusty buckskin Quarter Horse, Buttermilk.

Trigger became the most famous horse in film entertainment, even having his own Dell comic book recounting his exploits.

Roy Rogers made many personal appearances with Trigger in tow. More than once, he escorted him up three or four flights of stairs at hospitals to visit with sick children, according to his autobiography Happy Trails.

While appearing in a show at the Glasgow Empire in 1954, Trigger was presented with a kilt, the material being Dress Stewart Tartan. The kilt was presented by Jim Gordon of Thomas Gordon and Sons, and was made by Williamina McLauchlan. 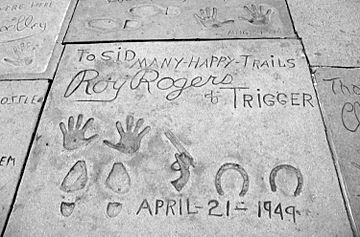 After the original Trigger (Golden Cloud) died in 1965 at Rogers' new ranch in Apple Valley, California, Rogers arranged for Everett Wilkens of Bischoff's Taxidermy in Los Angeles (now Bischoff's Taxidermy and Animal FX in Burbank, California) to preserve and mount the horse. The hide was professionally stretched over a foam likeness of Trigger, and the resulting mount was put on display in the Roy Rogers-Dale Evans Museum when it opened in Apple Valley in 1967. The mount was later moved with the museum to Victorville, California, in 1976, and then to Branson, Missouri in 2003.

A 24-ft (7 m) replica of a rearing Trigger was produced to sit atop the Roy Rogers Museum in Victorville. The 1,300-lb (600 kg) replica could be seen from the freeway and served as a landmark until the museum closed and moved to Branson. When the fiberglass replica of Trigger was being made, Rogers was approached by the owners of the Denver Broncos. He allowed another statue to be made for them, then broke the mold. "Bucky the Bronco", Trigger's twin, stands above the south scoreboard of Empower Field at Mile High (formerly Broncos Stadium).

After the museum's closing in 2010, its contents were placed at public auction on July 14–15, 2010 at Christie's auction house in New York City. Trigger's preserved remains sold for $266,500 to television channel RFD-TV, which plans to start a Western museum. Bob Tinsley, a Victorville developer who built Roy Rogers' home in nearby Apple Valley, bought the fiberglass replica in April 2010, and plans to make the statue a part of historic Apple Valley Village. "I just couldn't see letting him go anywhere else," he explained.

All content from Kiddle encyclopedia articles (including the article images and facts) can be freely used under Attribution-ShareAlike license, unless stated otherwise. Cite this article:
Trigger (horse) Facts for Kids. Kiddle Encyclopedia.