Kids Encyclopedia Facts
Not to be confused with Peachtree City, Georgia.

Peachtree Corners is the only Atlanta northern suburban city developed as a planned community. Peachtree Corners has earned the designation as a top ten best suburb, and one of the best places to live, in the entire State of Georgia for its education quality, low crime rate, cost of living, employment, access to amenities, and overall top-notch livability. It was also designated as a best Atlanta suburb for families, millennials, and professionals. The city is bordered to the north and west by the Chattahoochee River and is located east of Dunwoody.

The now-defunct Jones Bridge (1904) once connected Pinckneyville to Alpharetta.

Prior to 1818, the western corner of what became Gwinnett County was Creek and Cherokee Indian Territory, and it was illegal for white families to settle there. However, there were several families of white squatters in the area before settlement was legalized, including Isham Medlock, whose name is lent to Medlock Bridge Road. In the early 1800s a road was built along a Native American trail from what is now Buford to what is now Atlanta. A small farming community known as "Pinckneyville" grew up along that road. By 1827, the community was home to the second school in Gwinnett County, the Washington Academy, founded on what is now Spalding Drive. The area was also home to a post office, saloon, blacksmith shop, carpenter shop and inn. However, the prosperity of Pinckneyville was to be short-lived. In 1870 a railroad was built through Norcross, and due to the heavy trading that could be done via the railroad, all of the area's businesses and many residents moved from Pinckneyville to Norcross. 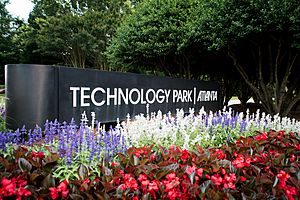 For the next century, the area remained a rural farming community. In the late 1960s, Paul Duke developed the idea of creating Peachtree Corners, a planned community to be constructed in the area that was once known as Pinckneyville. In 1967, Duke initiated the planning of the office component of Peachtree Corners, Technology Park/Atlanta, a campus for high technology industries to employ engineers graduating from the Georgia Institute of Technology. As a member of the Georgia Tech National Advisory Board, he raised $1.7 million to develop the business center. Initial residents of the tech park included GE, Scientific Atlanta, and Hayes Microcomputer Products. In 1968, Duke established Peachtree Corners, Inc., a development corporation for the residential parts of the community.

During the 1970s, Jim Cowart began to develop the neighborhoods that Duke had planned. Initial neighborhoods developed by Cowart included Peachtree Station, Chattahoochee Station, Spalding Corners, Revington, Linfield, and Amberfield. During this period, Cowart laid more sewer pipes than Gwinnett County. Neely Farm was one of the last neighborhoods to be built in Peachtree Corners, and it is located on the former farm of Frank Neely that abuts the Chattahoochee River.

In 2010 the UPCCA again pursued the incorporation of Peachtree Corners, after a failed attempt by the city of Norcross to annex a portion of Technology Park. In a referendum held on November 8, 2011, residents of Peachtree Corners voted to incorporate as Gwinnett County's 16th city, and, with a population of 40,059, making Peachtree Corners its largest. Municipal operations began on July 1, 2012. 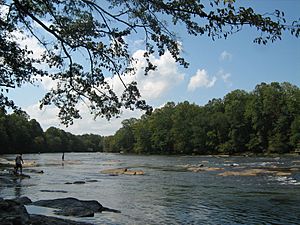 The Chattahoochee River, seen here at Jones Bridge Park, flows through many of Peachtree Corners' neighborhoods. 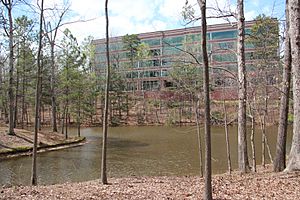 Building on Triangle Parkway in wintertime

In October 2014, United Arab Shipping Company relocated its North American Headquarters to Peachtree Corners. The company purchased a 50,000 square foot office building on Spalding Drive for logistics, accounting and customer service operations. In 2017 it merged with Hapag-Lloyd, keeping its headquarters in Peachtree Corners, investing an additional $5.5 million, and adding 363 new jobs to expand its offices. With 230 vessels and more than 12,000 employees, Hapag-Lloyd is the fifth-largest shipping company in the world, serving customers in 127 countries.

In May 2016, Comcast Corporation, the American global telecommunications conglomerate and owner of Xfinity and NBCUniversal, relocated its Southeast Headquarters to the Wells Building, a 10-story office building in Peachtree Corners.

In August 2021, the NASDAQ-100 and S&P 500 company, Intuitive Surgical announced its expansion of its Peachtree Corners facility, building an additional $600 million dollar, 750,000 square foot, net zero carbon footprint, medical campus in the city, adding 1,200 new jobs and adding to the cluster of many medical, biomedical, biopharmaceutical, and health information technology companies that are in Peachtree Corners.

Soliant Health, a leading provider of specialized healthcare and education staffing services to hospitals and schools around the nation, expanded its Peachtree Corners headquarters to 83,000 square feet.

The French-American Chamber of Commerce moved its operations from the Consulate General of France in Atlanta to office space within the Innovation Center at Curiosity Lab. In relation to the move, La French Tech – a French government-supported ecosystem of startups, investors, decision-makers and community builders – will expand collaboration with Peachtree Corners as it guides companies looking to develop technologies and expand into North America.

Funded by the city, Peachtree Corners has produced a non-profit business incubator affiliated with the Technology Development Center at Georgia Tech as part of the city's Curiosity Lab that provides for software and hardware technology startups, providing these companies with the support they need to launch new products and grow. 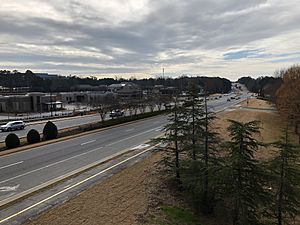 Peachtree Corners is in proximity to many major highways in Metro Atlanta, such as I-285, I-85, GA 316, and GA 400. The city is approximately 21 miles (33 km) northeast of downtown Atlanta. A number of collector roads distribute traffic around the city, including GA 141 (Peachtree Parkway/Medlock Bridge Road), GA 140 (Holcomb Bridge Road), Peachtree Corners Circle, Spalding Drive and Peachtree Industrial Boulevard.

Peachtree Corners has implemented support for electric vehicles having installed one of the State of Georgia's largest electric vehicle charging facilities that provides charging without cost to users, and installing the country's first roadway surface solar panel system to support it, with plans for further expansion of roadway solar power collection and charging facilities and including solar power for existing infrastructure across the city by installing other types of panels that may include sidewalk, bike lane, and other surface collectors.

Peachtree–DeKalb Airport is a county-owned, public-use airport approximately 7.9 miles (13 km) from Peachtree Corners. Gwinnett County Airport is a municipal airport located about 18 miles (29 km) from the city. Hartsfield–Jackson Atlanta International Airport, which is a major passenger hub for domestic and international travelers, is located 29 miles (46 km) south of Peachtree Corners. It is accessible by I-85, I-285, and MARTA. 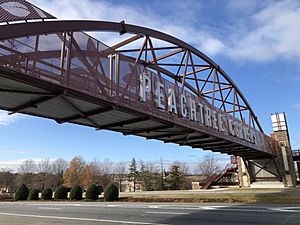 Pedestrian Bridge built by the City over Peachtree Parkway

The Western Gwinnett Bikeway is a multi-use trail along Peachtree Industrial Boulevard. It is a shared use path, cycle track, and bike lane connecting to neighboring Duluth and Norcross. Peachtree Corners has been adding additional sidewalks and safety upgrades for pedestrians, thus far adding many miles of sidewalks, additional pedestrian safety crossings, and adding 175 street lights, all designed to make the city more walkable, safer and more connected. The city also has a 14-foot wide walkway arch truss pedestrian bridge with elevators and stairs over S.R. 141 (Peachtree Parkway) for pedestrians walking between The Forum and the Town Center. The city is also adding to a multi-use trail system (the Corners Connector Trail system) that crisscrosses the city linking office parks, restaurants, retail centers, the new town center and surrounding neighborhoods. In addition, the city has launched the world's first fleet of shared E-scooters with teleoperated repositioning.

Peachtree Corners has its own smartphone app, "CornersConnect", for the use of citizens and visitors to keep up with events, dining, entertainment, public parks, bus routes, city information, and news, and to help users pay their water bill, county property taxes, to register to vote, and to photograph and report areas that need improvement across the city.

All content from Kiddle encyclopedia articles (including the article images and facts) can be freely used under Attribution-ShareAlike license, unless stated otherwise. Cite this article:
Peachtree Corners, Georgia Facts for Kids. Kiddle Encyclopedia.