Roswell is a city in northern Fulton County, Georgia, United States. At the official 2010 census, the city had a population of 88,346. The 2019 estimated population was 94,763, making Roswell the state's ninth largest city. A close suburb of Atlanta, Roswell has an affluent historic district. 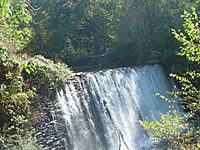 In 1830, while on a trip to northern Georgia, Roswell King passed through the area of what is now Roswell and observed the great potential for building a cotton mill along Vickery Creek. Since the land nearby was also good for plantations, his idea was to put cotton processing near cotton production.

Toward the middle of the 1830s, King returned to build a mill that would soon become the largest in north Georgia – Roswell Mill. He brought with him 36 African slaves from his own coastal plantation, plus another 42 skilled carpenter slaves bought in Savannah to build the mills. The slaves built the mills, infrastructure, houses, mill worker apartments, and supporting buildings for the new town. The Africans brought their unique Geechee culture, language, and religious traditions from the coast to north Georgia. 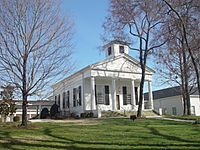 King invited investors from the coast to join him at the new location. He was also joined by Barrington King, one of his sons, who succeeded his father in the manufacturing company. Archibald Smith was one of the planters who migrated there to establish a new plantation, also bringing enslaved African Americans from the coastal areas.

Barrington Hall (the home of Barrington King), Smith Plantation (the home of Archibald Smith) and Bulloch Hall (the childhood home of President Theodore Roosevelt's mother, Mittie Bulloch) have been preserved and restored. They are now open to the public. According to the 1850 Slave Schedules, these three "founding families", together with the next three largest planters, held 192 slaves, 51% of the total 378 slaves held in Roswell District. Archibald Smith had a 300-acre (1.2 km2) cotton plantation. According to the 1850 Census, Barrington King held 70 slaves. Half of these slaves were under the age of 10. These slaves worked in Barrington's household. Barrington King "leased" or "rented" some of his adult male slaves to the Roswell Manufacturing Company, but they did not work around the mill machinery. 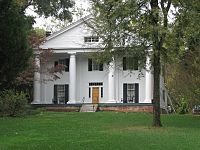 The Roswell area was part of Cobb County when first settled, and the county seat of Marietta was a four-hour (one-way) horseback ride to the west. Since Roswell residents desired a local government, they submitted a city charter for incorporation to the Georgia General Assembly. The charter was approved on February 16, 1854.

By the time of the Civil War, the cotton mills employed more than 400 people, mostly women. Given settlement patterns in the Piedmont region, they were likely of Scots-Irish descent. As the mill increased in production, so did the number of people living in the area. 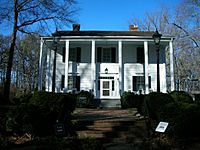 During the Civil War, the city was captured by Union forces under the leadership of General Kenner Garrard. Under orders of General Sherman, Garrard shipped the mill workers north to prevent them from returning to work if the mills were rebuilt. This was a common tactic of Sherman to economically disrupt the South. The mill was burned, but the houses were left standing. The ruins of the mill and the 30-foot (9.1 m) dam that was built for power still remain. Most of the town's property was confiscated by Union forces. The leading families had left the town to go to safer places well before the Federal invasion, and arranged for their slaves to be taken away from advancing Federal troops, as was often the practice. Some slaves may have escaped to Union lines.

After the war, Barrington King rebuilt the mills and resumed production. While many freedmen stayed in the area to work as paid labor on plantations or in town, others migrated to Fulton County and Atlanta for new opportunities. The South suffered an agricultural depression resulting from the effects of the war and labor changes.

At the end of 1931, the United States was in the midst of the Great Depression. The difficult economic conditions drove Milton County, Roswell's neighboring county to the north (note: much of what is now Roswell was part of Milton County already), to merge in its entirety with Fulton County, Roswell's neighboring county to the south. To facilitate the merger, Roswell was ceded from Cobb County to become part of Fulton County. This became effective the 9th day of May in 1932. Roswell filed all legal records, including vital statistics, real estate, and the results of torts with the county clerk of Cobb before this date; with the county clerk of Fulton, after this date.

Roswell is now one of the largest cities in the state; its population has increased most steadily in the last 15 years.

Jere Wood, a Republican, has served as mayor of Roswell since 1997.

The Consulate-General of Honduras in Atlanta is located at Suite 3 in 600 Houze Way in Roswell. The city's largest employers are The Kimberly Clark Corporation, North Fulton Regional Hospital, Harry's Farmers Market, and The City Of Roswell. A section of Route 400 between Roswell and Atlanta is known as the high tech corridor, where many technology firms like Kimberly Clark have factories or offices. As of the 2006 census, one third of Roswell's 5.000 registered business were home based. The largest industries were retail, technology, food services, wholesale trade and health care.

Many Roswell residents work in nearby Atlanta.

Entrance to Roswell High School. The gymnasium (aka the Stinger Dome) is visible with its domed roof.

The Chess Club and Scholastic Center of Atlanta, founded by GM Ben Finegold, is located in Roswell.

All content from Kiddle encyclopedia articles (including the article images and facts) can be freely used under Attribution-ShareAlike license, unless stated otherwise. Cite this article:
Roswell, Georgia Facts for Kids. Kiddle Encyclopedia.