Bulloch Hall is a Greek Revival mansion in Roswell, Georgia, built in 1839. It is one of several historically significant buildings in the city and is listed on the National Register of Historic Places. This is where Martha Bulloch Roosevelt ("Mittie"), mother of Theodore Roosevelt, 26th U.S. President, lived as a child. It is also where she married Theodore Roosevelt's father, Theodore Roosevelt, Sr. The Roosevelt family are descendants of Archibald Bulloch, the first Governor of Georgia (1730-1777).

The antebellum mansion was built by Mittie's father, Major James Stephens Bulloch. He was a prominent planter from the Georgia coast, who was invited to the new settlement by his friend Roswell King. After the death of his first wife Hester Amarintha "Hettie" Elliott - mother of his son James D. Bulloch - Bulloch married the widow of his first wife's father, Martha "Patsy" Stewart Elliot, and had four more children:

Major Bulloch selected a ten-acre plot of land and engaged a skilled builder, Willis Ball, to design and construct an elegant Greek Revival home. The Bulloch family lived in an abandoned Cherokee farmhouse while slaves and trained laborers built the house. In 1839, Major Bulloch and his family moved into the completed house.

Soon Bulloch also owned land for cotton production and held enslaved African-Americans to work his fields. According to the 1850 Slave Schedules [1], Martha Stewart Elliott Bulloch, by then widowed a second time, owned 31 enslaved African-Americans. They mostly labored on cotton and crop production; but some would have worked in the home, on cooking and domestic tasks to support the family. Some of the known slaves who worked in the house were "Maum" Rose (cook), "Maum" Charlotte (housekeeper), "Maum" Grace (nursemaid), "Daddy" William, "Daddy" Luke, and Henry.

Birth and marriage of Martha Bulloch 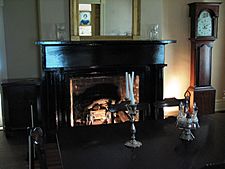 Fireplace mantle in the dining room, where Mittie and her husband, Theodore Roosevelt, Sr. (known as Thee), were married in front of the pocket doors on December 22, 1853

In 1835 while living in Hartford, Connecticut, James' wife gave birth to a daughter, also named Martha. She was known affectionately as Mittie. Mittie was raised at Bulloch Hall.

Though the date of their initial meeting is unclear, we do know that when Theodore Roosevelt, Sr. was 19, he came to Roswell, Georgia with his friend Hilborne West, who was to marry Mittie's oldest half sister, Susan Elliott. Mittie was 15 at the time. "Thee," as he was called, met Mittie again when she went to Philadelphia in January 1853 to stay with her sister Susan. They fell in love and began planning their wedding through letters between Mittie in Roswell and Thee in New York. They were married in the dining room of Bulloch Hall on December 22, 1853. The marriage was a gala affair with people coming for many miles and staying for a week. Mittie's friend and bridesmaid, Mrs. William Baker, left a recollection of the wedding in an interview by Margaret "Peggy" Mitchell of Gone with the Wind fame, in the Atlanta Journal, June 10, 1923.

After the marriage, the couple moved to New York City. The couple lived with Thee's parents while a house, a wedding gift from them, was constructed at 28 E 20th Street. In 1856, Martha, Anna, and Irvine moved to Philadelphia to live with Martha's daughter Susan West. Anna and Martha later moved in with Mittie and Thee in New York. The Roosevelt couple became the parents of Anna; Theodore Roosevelt, the 26th President of the United States; Elliott, and Corinne. Later Elliott married Anna Rebecca Hall, and his daughter was First Lady of the United States, Eleanor Roosevelt. 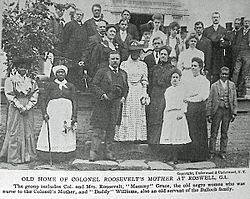 Theodore Roosevelt, who had begun his presidency on reasonably good terms for a half-northerner president, had infuriated the South by inviting Booker T. Washington to dine in the White House. Consequently, he waited a few years until the episode blew over and finally visited Bulloch Hall for the first time while touring the South in 1905. He was thought to be the first sitting President of the United States to visit the South since the end of the American Civil War, however this is incorrect as William McKinley had visited the South earlier while celebrating the victory of the Spanish–American War.

President Roosevelt and his wife Edith arrived in Roswell, Georgia on October 20, 1905. At Bulloch Hall, he spoke as follows:

It has been my very great good fortune to have the right to claim my blood is half Southern and half Northern, and I would deny the right of any man here to feel a greater pride in the deeds of every Southerner than I feel. Of all the children, the brothers and sisters of my mother who were born and brought up in that house on the hill there, my two uncles afterward entered the Confederate service and served with the Confederate Navy.

One, the younger man, served on the Alabama as the youngest officer aboard her. He was captain of one of her broadside 32-pounders in her final fight, and when at the very end the Alabama was sinking and the Kearsarge passed under her stern and came up along the side that had not been engaged hitherto, my uncle, Irvine Bulloch, shifted his gun from one side to the other and fired the two last shots fired from the Alabama. James Dunwoody Bulloch was an admiral in the Confederate service. ...

Men and women, don't you think I have the ancestral right to claim a proud kinship with those who showed their devotion to duty as they saw the duty, whether they wore the grey or whether they wore the blue? All Americans who are worthy the name feel an equal pride in the valor of those who fought on one side or the other, provided only that each did with all his strength and soul and mind his duty as it was given to him to see his duty."

It was listed on the National Register of Historic Places individually and also as a contributing building in the Roswell Historic District. 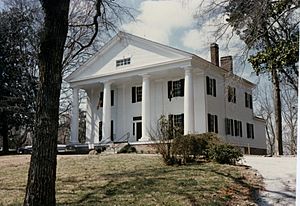 Bulloch Hall is located at:

This historic home is owned by the City of Roswell Georgia's Historic and Cultural Affairs Division and managed by Friends of Bulloch, Inc. a 501(c)3 charitable organization.

Bulloch Hall is open for tours seven days a week. Tour Schedule as of October 2016:

For more information and tours call the Hall at 770-992-1731 in the US. The official site of Bulloch hall is http://bullochhall.org/index.html

All content from Kiddle encyclopedia articles (including the article images and facts) can be freely used under Attribution-ShareAlike license, unless stated otherwise. Cite this article:
Bulloch Hall Facts for Kids. Kiddle Encyclopedia.