Jerome Bettis (born February 16, 1972) is a former American football player. He was a running back for the Pittsburgh Steelers. He is now retired. His nickname is "The Bus".

Jerome Bettis was picked in the first round (10th overall) of the 1993 NFL draft by the Los Angeles Rams. On July 22, 1993, Bettis signed a three-year $4.625 million contract with a signing bonus over $2 million. He was named a First-Team All-Pro and Offensive Rookie of the Year. He rushed for over 1,000 yards in each of his first two seasons with the Rams.

Governor Jennifer M. Granholm of the State of Michigan declared February 1, 2006 to be Jerome Bettis Day. Bettis was inducted into the Pro Football Hall of Fame in 2015. 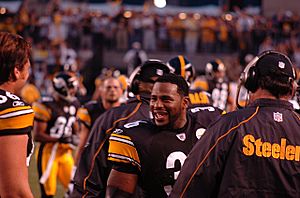 Bettis was born February 16, 1972, in Detroit, Michigan. Bettis did not start playing football until high school, as his primary passion as a youth had been bowling. He attended Mackenzie High School in Detroit, where he was a standout running back and linebacker. As a senior, he was rated the top player in the state by the Detroit Free Press, and was the Gatorade Circle of Champions Player of the Year award winner.

He attended the University of Notre Dame. In his sophomore year, he set the Notre Dame touchdown record with 20 in one season, with 16 rushing, and 4 receiving (23 total touchdowns including the 1992 Sugar Bowl, a record which still stands). During his time at Notre Dame, it was announced on national television that Jerome was the first player besides Raghib "Rocket" Ismail allowed by then coach Lou Holtz to tape his shoes and ankles outside his cleats.

Bettis did not graduate from college. He skipped his senior year at Notre Dame to enter the 1993 NFL Draft. 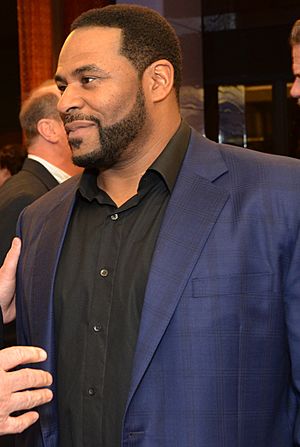 Although the Steelers have not officially retired Bettis' #36, they have not reissued it since his retirement and it is understood that no Steeler will ever wear it again. His number joins a list of other unofficially retired numbers such as those of Terry Bradshaw, Franco Harris, and Hines Ward.

On January 31, 2006, Detroit Mayor Kwame Kilpatrick and the City Council presented the key to the city to Bettis and declared the week "Jerome Bettis Week" for being "a shining example of what a kid with a dream from Detroit can accomplish with hard work and determination." Jerome moved to Atlanta, Georgia at the end of his career and is currently living there.

On May 21, 2006, Bettis received an honorary Doctoral degree from Lawrence Technological University in Southfield, Michigan.

Bettis is currently the host of The Jerome Bettis Show on WPXI-TV, filmed at Heinz Field in Pittsburgh, airing Saturdays at 7:00 PM and 1:00 AM. He was a commentator for the NFL Network and a former NBC studio analyst for Football Night in America. Now he is an NFL analyst for different ESPN programs, such as SportsCenter.

The Jerome Bettis Bus Stops Here Foundation and other agencies sponsor the Jerome Bettis Asthma and Sports Camp annually for children with asthma. Bettis has also delivered over 1000 pairs of cleats to children in the Detroit school system.

All content from Kiddle encyclopedia articles (including the article images and facts) can be freely used under Attribution-ShareAlike license, unless stated otherwise. Cite this article:
Jerome Bettis Facts for Kids. Kiddle Encyclopedia.