Alpharetta is a city located in northern Fulton County, Georgia, United States, and is a part of the Atlanta metropolitan area. As of the 2010 census, Alpharetta's population was 57,551. The estimated population in 2019 was 67,213.

In the 1830s, the Cherokee people in Georgia and elsewhere in the South were forcibly relocated to the Indian Territory (present-day Oklahoma) under the Indian Removal Act. Pioneers and farmers later settled on the newly vacated land, situated along a former Cherokee trail stretching from the North Georgia mountains to the Chattahoochee River.

One of the first permanent landmarks in the area was the New Prospect Camp Ground (also known as the Methodist Camp Ground), located beside a natural spring near what is now downtown Alpharetta. It later served as a trading post for the exchanging of goods among settlers.

Known as the town of Milton through July 1858, the city of Alpharetta was chartered on December 11, 1858, with boundaries extending in a 0.5-mile (0.80 km) radius from the city courthouse. It served as the county seat of Milton County until 1931, when Milton County was merged with Fulton County to avoid bankruptcy during the Great Depression.

The city's name is a variation of a fictional Indian girl, Alfarata, in a 19th-century song, "The Blue Juniata". The name of the city is also believed to have been derived from the first letter of the Greek alphabet. 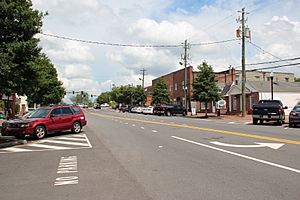 Alpharetta has a humid subtropical climate (Köppen climate classification Cfa) and is part of USDA hardiness zone 7b.

According to the 2010 census, the racial composition of the city of Alpharetta was as follows: 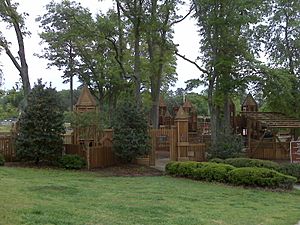 The Downtown Alpharetta Welcome Center is located at 178 South Main Street and has more than 200 complimentary brochures providing information on the surrounding area. The center is open Monday — Friday from 9 a.m. - 5 p.m. and Saturday 10 a.m. - 4 p.m.

The Alpharetta Family Skate Center (aka The Cooler) is on 10800 Davis Drive. It is also home to the Atlanta Sparks special needs hockey team.

The Alpharetta Brew Moon Fest is held the first Saturday in October on the streets of downtown Alpharetta.

The Scarecrow Harvest is held the first Saturday in October in downtown Alpharetta. The streets are lined with 100 scarecrows to celebrate its fall spirit.

The Alpharetta Arboretum at Wills Park was established in September 2008 and includes 26 trees. A brochure about the arboretum guides readers through a walking tour of the trees and is available at the Downtown Alpharetta Welcome Center.

The Alpharetta Arboretum at Cogburn Road Park was established in December 2008 and showcases seven trees. A complimentary brochure for the arboretum is available at the Downtown Alpharetta Welcome Center and provides a starting point for a self-guided walking tour.

The Alpharetta Farmers Market is a weekly farmers' market in the downtown area that opens every Saturday from 8 AM to 12:30 PM from April to October, and features farmers and gardeners from the surrounding area selling fresh vegetables, flowers, and edible goods such as jam. The market was named "Best Saturday Morning Excursion" in 2007 by Atlanta magazine.

The Downtown Alpharetta Historic District is located in the center of Alpharetta at the intersection of North Main Street, South Main Street, Milton Avenue, and Academy Street. Around this area are several historic buildings dating from the late 19th century and older. The downtown area has been restored, replacing more modern buildings with period structures, and includes dining, shopping, and widened brick sidewalks.

The Mansell House and Gardens is a 1912 Queen Anne-style home that serves as a special event facility in Alpharetta. It also serves as home to the Alpharetta Historical Society.

The Milton Log Cabin was built by Future Farmers of America students during the 1934-35 school year and resembles life during the late 19th century.

Verizon Wireless Amphitheatre at Encore Park is a 12,000-capacity outdoor venue that serves as the summer home to the Grammy Award-winning Atlanta Symphony Orchestra and plays host to acts like the Dave Matthews Band, Rod Stewart and the Eagles.

The Walk of Memories is located at American Legion Post 201 and pays tribute to veterans of the U.S. Armed Forces, community and friends, through a brick walk inscribed with the names of all Georgia residents killed in service including and following World War II. A separate section is reserved for those who served in the military and survived. A tank and helicopter are on display.

The Taste of Alpharetta is an annual food festival featuring food from local restaurants, live music, and art exhibits.

The Wire and Wood Alpharetta Songwriters Festival in downtown Alpharetta is held in October.

According to the City's 2012 Comprehensive Annual Financial Report, the top private sector employers in the city are:

Complexes in the area include: 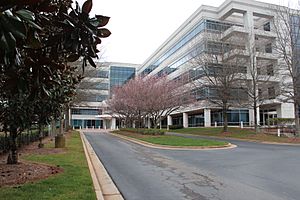 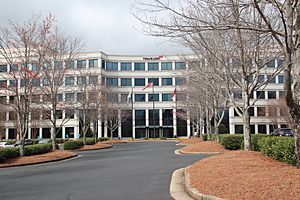 Cynergy Data is headquartered in Alpharetta, as was NetBank when it existed.

The following companies also have offices in Alpharetta:

The city is served by Fulton County Schools.

The Roman Catholic Archdiocese of Atlanta operates Holy Redeemer Catholic School (K-8) in Johns Creek; the school's address is often stated as being in "Alpharetta, GA".

Alpharetta is not directly served by MARTA trains, but is by multiple bus routes. Currently, there have only been plans to connect Alpharetta to the rest of Metro Atlanta via heavy rail.

All content from Kiddle encyclopedia articles (including the article images and facts) can be freely used under Attribution-ShareAlike license, unless stated otherwise. Cite this article:
Alpharetta, Georgia Facts for Kids. Kiddle Encyclopedia.