Milton is a city in Fulton County, Georgia, United States. Located about 30 miles due north of Atlanta, Milton is known for its rural and equestrian heritage. The City was incorporated on December 1, 2006, out of the unincorporated northernmost part of northern Fulton County. As of the 2010 census, Milton's population was 32,661, with an estimated population of 39,587 in 2019. Milton is named in honor of the former Milton County, which was named after Revolutionary War hero John Milton. The portion of north Fulton County generally north of the Chattahoochee River comprises most of the territory of the former Milton County.

A citizens' committee was formed in 2005 to help determine the viability of incorporating unincorporated northern Fulton County. After debate, the Georgia State House and Senate approved a bill creating the city of Milton on March 9, 2006. On March 28, Governor Sonny Perdue signed the bill into law. In July 2006, voters approved a ballot referendum on July 18 by more than 86%. On August 4, 2006, Governor Perdue appointed a five-person commission to serve as the interim government of Milton. Milton adopted the existing county ordinances on December 1, 2006.

As of April 2007[update], the US Postal Service recognizes Milton as a valid alias for ZIP code 30004, which is served from the Alpharetta post office. 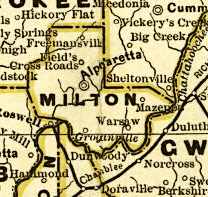 Milton is one of the wealthiest cities in the state of Georgia with a median household income of $128,559. Between 2015-2019, 76.4% of people (or an immediate family member) in Milton owned their home; the median value of such housing units was $541,000. Approximately 3.5% of the population lives below the poverty line. The vast majority of Milton is part of the ZIP code 30004, which has an average household income of $99,412.

The city is served by Fulton County Schools

All content from Kiddle encyclopedia articles (including the article images and facts) can be freely used under Attribution-ShareAlike license, unless stated otherwise. Cite this article:
Milton, Georgia Facts for Kids. Kiddle Encyclopedia.