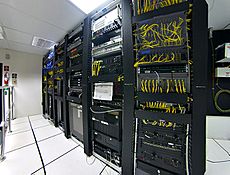 A view inside data center.

Data center is a special building or room built to house a lot of running computer servers. It provides fast network connections between servers to communicate and process a lot of data, and some for talking to the outside world. There are cooling machines to deal with heat from each server and control moisture to stop computers from breaking too fast. There is often an emergency electricity supply from an UPS (or diesel generator) to make sure that computers still work even when mains power goes out. And there are usually some kind of fire extinguishers there to keep fire from computers if there happen to be any.

Data centers are normally built and used by companies that need a lot of always-on computer, companies that are hired to do computing for someone else (for example, ones that do web hosting), and most modern telecommunication companies.

All content from Kiddle encyclopedia articles (including the article images and facts) can be freely used under Attribution-ShareAlike license, unless stated otherwise. Cite this article:
Data center Facts for Kids. Kiddle Encyclopedia.