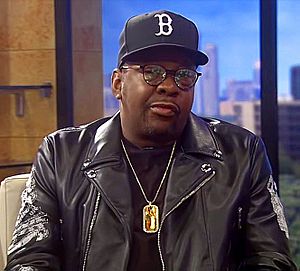 Robert Barisford Brown (born February 5, 1969) is an American R&B singer-songwriter and a member of New Edition. He left the group in 1986 and has many hits, including Don't be Cruel, Every Little Step and Roni. Brown is an African-American and was born in Roxbury, Boston, Massachusetts.

Brown married Whitney Houston in 1992. They had a daughter, Bobbi Kristina Houston Brown, in 1993. The couple separated in 2006; Houston divorced him in 2007.

Brown has been diagnosed with attention-deficit hyperactivity disorder and bipolar disorder.

All content from Kiddle encyclopedia articles (including the article images and facts) can be freely used under Attribution-ShareAlike license, unless stated otherwise. Cite this article:
Bobby Brown Facts for Kids. Kiddle Encyclopedia.