Sandy Springs is a city in northern Fulton County, Georgia and an inner ring suburb of Atlanta. The city’s population was 108,080 at the 2020 census, making it Georgia's seventh-largest city. It is the site of several corporate headquarters, including UPS, Newell Brands, Inspire Brands, Cox Communications, and Mercedes-Benz USA's corporate offices.

In 1842, the Austin-Johnson House was erected on what is now Johnson Ferry Road. It is the oldest house in Sandy Springs. In 1851, Wilson Spruill donated 5 acres (2.0 ha) of land for the founding of the Sandy Springs United Methodist Church, near the natural spring for which the city is named. In 1905, the Hammond School was built at Johnson Ferry Road and Mt. Vernon Highway, across the street from the church.

In 1950, the state legislature blocked Atlanta from annexing the community, which remained rural until the Interstate Highway System was authorized by the Federal-Aid Highway Act of 1956. In 1959, after a fire at Hammond Elementary School, Atlanta Mayor William Hartsfield urged residents to support annexation so that the area would have better firefighting protection. Community opposition killed the proposal. In the early 1960s, Georgia 400 and Interstate 285 were constructed, connecting Sandy Springs to metro Atlanta and initiating a housing boom that brought new residents and major land development. In 1966, annexation by Atlanta was defeated in a referendum, with two-thirds voting against.

Debate over incorporation began in the 1970s when the city of Atlanta attempted to use a state law to force annexation of Sandy Springs. The attempt failed when the Supreme Court of Georgia ruled that the law was unconstitutional. In response, the Committee for Sandy Springs was formed in 1975. In every legislative session, state legislators representing the area introduced a bill in the Georgia General Assembly to authorize a referendum on incorporation. Legislators representing Atlanta and southwestern Fulton County, who feared tax revenue that would be lost from incorporation, blocked the bills using the procedural requirement that all local legislation be approved first by a delegation of representatives from the affected area. In 1989, a push was made for Sandy Springs to join neighboring Chattahoochee Plantation in Cobb County. This move was blocked by Speaker of the House Tom Murphy.

When the Republican Party gained a majority in both houses of the General Assembly in 2005, the procedural rules previously used to prevent a vote by the full chamber were changed so that the bill was handled as a state bill and not as a local bill. The assembly also repealed the requirement that new cities must be at least 3 miles (4.8 km) from existing cities, because the new city limits border both Roswell and Atlanta. The bill allowing for a referendum on incorporation was introduced and passed as HB 37. The referendum initiative was approved by the Assembly and signed by Governor Sonny Perdue.

The referendum was held on June 21, 2005, and residents voted 94% to 6% in favor of incorporation. Many residents expressed displeasure with county services, claiming, based upon financial information provided by the county, that the county was redistributing revenues to fund services in less financially stable areas of the county, ignoring local opposition to rezoning, and allowing excessive development. Many residents of unincorporated and less-developed south Fulton County strongly opposed incorporation, fearing the loss of tax revenues which fund county services. County residents outside Sandy Springs were not allowed to vote on the matter. Efforts such as requesting the U.S. Justice Department to reject the plan were unsuccessful.

A mayor and six city council members were elected in early November 2005, with Eva Galambos, who had initiated and led the charge for incorporation, elected mayor by a wide margin. Formal incorporation occurred on December 1, making Sandy Springs the third-largest city ever to incorporate in the U.S. The city's police force and fire department began service in 2006. In 2010, the city became the first jurisdiction in Georgia to successfully "bail out" from the preclearance requirements of Section 5 of the Voting Rights Act.

The boundaries of Sandy Springs are Atlanta to the south, Cobb County (at the Chattahoochee River) to the west and north, Roswell (also at the river) to the north, and Dunwoody and Brookhaven, at the DeKalb County line, to the east. A small panhandle in the northeast extends between the Chattahoochee River to the north and Dunwoody to the south, ending in a very small border with Peachtree Corners in Gwinnett County.

Sandy Springs has a humid subtropical climate (Köppen climate classification Cfa). During January and February 2014, Sandy Springs and Atlanta experienced an ice storm which gained national attention due to the huge traffic jams all over interstates such as 285, 75, and GA 400. People were forced to stay in their cars overnight in freezing temperatures. 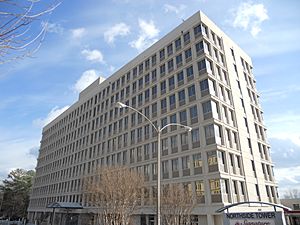 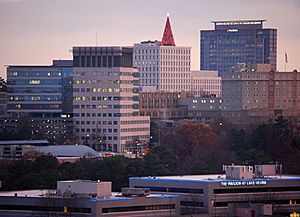 (Note: the 2000 census numbers are for Sandy Springs prior to incorporation, but cover the same area.)

Sandy Springs offers a host of annual events each year.

The Sandy Springs Festival is the largest community event in Sandy Springs, with approximately 30,000 attendees. Established in 1984, the annual festival celebrated its 30th year in 2015. The festival features a juried artist's market, civic and business expo, performances by regional acts and community bands, a children's area with crafts and activities, a teen territory with bungee jumps and inflatables, the annual Kiwanis Pet Parade, the annual Doug Kessler Lighting 10K/5K race, and a food court. The festival serves as the primary fundraiser for Heritage Sandy Springs, a nonprofit dedicated to building community through preserving and promoting the historic and cultural identity of Sandy Springs. Heritage Sandy Springs also maintains Heritage Green, a 4-acre (1.6 ha) park in the heart of Sandy Springs. The most recent festival was held September 19–20, 2015.

Sandy Springs Artapalooza is a free fine arts festival held each year in Sandy Springs. Each year 125 to 150 notable artists from across the country have the opportunity to participate. Organizers of the event include the Georgia Foundation for Public Spaces and ArtsSpring, two groups that are dedicated to bringing free arts programs to the community.

Stars and Stripes Celebration is an annual community fireworks display held over the July 4th holiday at the Concourse Corporate Center. The community gathers on the Concourse lawn for fireworks and live music.

The annual Chattahoochee River Summer Splash, held in July, is a 6-mile (10 km) float along the Chattahoochee River, beginning at Morgan Falls Dam and finishing at Cochran Shoals-Powers Island National Recreation Area. After completing the float, participants can enjoy an afternoon of live music, food and fun during festivities at Powers Island. Guests can bring their own kayaks, canoes, or rafts, or rent them from several local outfitters.

The Heritage Sandy Springs Museum opened on March 20, 2010. It is dedicated to the history of the Sandy Springs community and is located in the repurposed Williams-Payne house at Heritage Green. Two notable exhibits are "Sandy Springs: Land and People", which tells the changing story of Sandy Springs as the home of Native Americans, rural farmers, and modern suburbanites; and "A Land Nearby", which features a collection of 20 photographs of Georgia's Barrier Island taken by Dr. Curt Hames Jr.

Sandy Springs also has a museum devoted to Anne Frank. 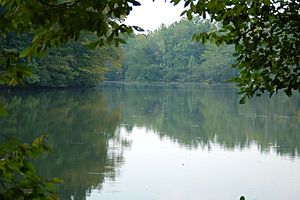 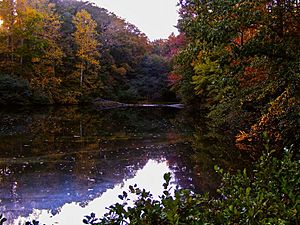 The largest employers within Sandy Springs are hospitals, headquarters and regional offices from a variety of industries including computer related services, package delivery, telecommunications, media, and financial transaction processing.

Sandy Springs is home to three hospitals: Northside Hospital, St. Joseph's Hospital and Children's Healthcare of Atlanta, comprising 40 percent of the hospital beds in the region.

The initial campus of Sophia Academy, which opened in 1999, was on a rental property, in what became Sandy Springs. Construction on its new campus on what later became Chamblee began circa 2007.

Roswell Road is considered the "main street" of the city, with a majority of residents living within 2 miles of the corridor. It connects Roswell at the Chattahoochee River to the north into the Buckhead to the south. It runs through the heart of Downtown Sandy Springs, with the City Springs complex being located on the highway.

Recently completed major road projects include the widening of Abernathy Road between Johnson Ferry and Roswell Roads from two lanes to four plus a road median. The western intersection has been reconfigured so that traffic to and from Johnson Ferry Road − which carries heavy loads of Cobb County commuters across the Chattahoochee River at rush hour − now flows directly with Abernathy to and from the northwest. Additionally, the Roswell Road bridge over I-285 has been widened to add a turn lane in each direction. There had previously been talk of a tunnel under the freeway to bypass the highway interchange altogether, however this proved to be much too expensive. Another state project is the addition of a half-diamond interchange to Georgia 400 on the north side of Hammond Drive, allowing southbound traffic to exit and northbound traffic to enter the highway. (Ramps on the south side were not possible due to the proximity of the 400/285 interchange.)

The city's public works department has made significant improvements in the conditions of roads and traffic signals since incorporation in December 2005. The department has cleaned approximately 1,500 catch basins, striped 30 miles (48 km) of roadway, responded to more than 2,000 calls for repair and service, re-timed hundreds of traffic lights to help improve the flow of traffic and reduce automobile idling, and repaved 60 mi (97 km) of roads.

The 2008 fiscal year saw the creation of the Sandy Springs Traffic Management Center (TMC). The TMC was constructed and began to operate in less than six months. Construction began in February 2008, five cameras viewed traffic along Roswell Road by the end of June. Special features of the TMC include a webpage that allows the public access to real-time traffic conditions and voice-activated controls. By June 2009, 16 traffic cameras are now available and can be viewed online at the city's website.

The major provider of mass transit is MARTA, which operates a heavy rail rapid transit line and several bus lines through Sandy Springs. The city is served by the Medical Center, Sandy Springs and North Springs stations. The Georgia Regional Transportation Authority also operates express buses from the North Springs station (which has its own ramps to and from 400) to other counties.

Currently the city is limited in multi-use trails, but bike lanes can be found in certain parts of the city. The city is currently working on creating more trails and bike lanes. Currently, the Abernathy Greenway is a popular multi-use trail running adjacent to Abernathy Road, connecting to Abernathy Park. The PATH400 Greenway Trail is a multi-use trail running along the Georgia 400 freeway in the Buckhead district of Atlanta. Sandy Springs is currently in the early stages of planning an extension of the trail through the city north into Roswell. Once complete, it would run from the northern border of Sandy Springs to the Atlanta BeltLine. As well, the city is working with the Georgia Department of Transportation to transform the city's portion of Roswell Road into a more pedestrian and transit friendly corridor.

All content from Kiddle encyclopedia articles (including the article images and facts) can be freely used under Attribution-ShareAlike license, unless stated otherwise. Cite this article:
Sandy Springs, Georgia Facts for Kids. Kiddle Encyclopedia.