Kids Encyclopedia Facts
This page is about the city in DeKalb County, Georgia. For the portion of the historic neighborhood that lies in Atlanta, see Historic Brookhaven (Atlanta).

Brookhaven is a city in the northeastern suburbs of Atlanta that is located in western DeKalb County, Georgia, United States, directly northeast of Atlanta. On July 31, 2012, Brookhaven was approved in a referendum to become DeKalb County's 11th city. Incorporation officially took place on December 17, 2012, on which date municipal operations commenced. With a population of around 55,554 as of 2019, it is the largest city in DeKalb County. The new city stretches over 12 square miles (31 km2). 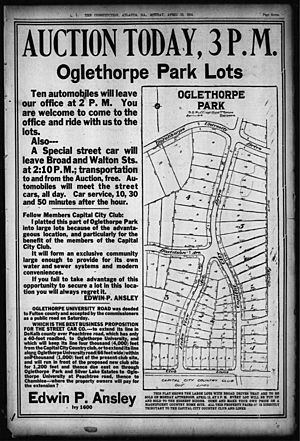 Brookhaven's first permanent European settler was John Evins, who started a plantation around 1810. Harris and Solomon Goodwin, who moved to Georgia from South Carolina, became owners of the land in the 1830s. The Goodwin home and the family graveyard have been preserved at the 3900 block of Peachtree Road, near Dresden Drive. A train station known as Goodwin's was constructed along the Atlanta and Richmond (later Atlanta and Charlotte) railway in 1873.

The settlement of Cross Keys, with a population of 250 in 1876, was located one mile (2 km) north along the rail line from Goodwin's. In 1879 Cross Keys was described:

Nancy's Creek furnished power for operating a mill. The place has two churches—Methodist and Baptist—one common school, and steam cotton gins. Cotton and wood form the chief exports. About 140 bales of cotton shipped per annum, most of which is carried to Atlanta by wagon. Population within a radius of 2 miles [3 km], near 400. Mail daily… Depot and station [is] one and one-quarter miles [2.0 km] distant [from] this place.

Atlanta residents began constructing summer cottages in the community around 1900. In 1910, 150 acres (61 ha) on the north side of Peachtree Road were purchased for development as a planned community surrounding a golf course. The nine-hole golf course, designed by Herbert Barker, a golf pro from Garden City, Long Island, opened in 1912. Residences developed in three phases, with Brookhaven Estates designed in 1910, followed by Country Club Estates in 1929 and the Carleton Operating Company in 1936. Independently, Edwin P. Ansley sold lots in the area, calling it Oglethorpe Park. Construction of the historic neighborhood was largely complete by the end of World War II. The country club became part of the downtown Capital City Club in 1911, and its name was changed to the Capital City Country Club. The golf course was expanded from nine to eighteen holes in 1915. The clubhouse, designed by Preston Stevens in the French Provencial style, was completed in 1928.

From the 1950s to the 1970s, major commercial and residential development took place in Brookhaven, resulting in the area being largely built-out by 1980. The Brookhaven MARTA Station opened in 1984. In 1986, the Capital City Club and its surrounding estate homes were placed on the National Register of Historic Places, and the neighborhood is now officially known as "Historic Brookhaven."

The idea of incorporating Brookhaven as a city was first brought up in 2007, with the purpose of securing local community control over planning, zoning, land use, police, fire protection, and parks and recreation---rather than having those issues decided from Decatur. However, the idea failed to gain momentum. The proposed city would have included 53,000 people. In 2011, the incorporation of Brookhaven was revived when state Rep. Mike Jacobs announced plans to introduce legislation allowing the creation of a city of Brookhaven, over the objections of many residents of the neighborhood of Historic Brookhaven, which would not lie in the proposed city boundaries. On July 31, 2012, 55% of voters chose to incorporate the city of Brookhaven. In December of that same year J.Max Davis was elected as the city's first Mayor. 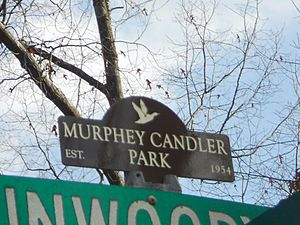 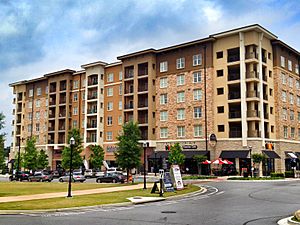 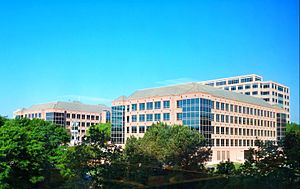 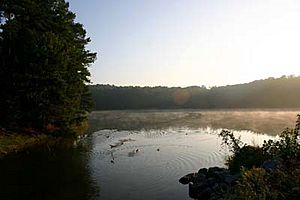 The lake at Murphey Candler Park 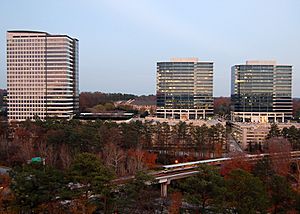 Skyscrapers in the Brookhaven portion of Perimeter Center

The Metropolitan Atlanta Rapid Transit Authority(MARTA) provides heavy rail and bus service for Brookhaven, as well as the surrounding areas.

Both Brookhaven/Oglethorpe and Medical Center Stations have several bus routes that serve Brookhaven, including:

*Route 39 leaves from Lindbergh Center and Doraville Stations, but still serves the southern part of the city.

In 2016 the City adopted the Bicycle, Pedestrian and Trail Plan that lists implementable policies and transportation projects aimed at accommodating all active transportation users.

On July 25, 2017, the City Council approved a new sidewalk and bike ordinance. The ordinance mandates for sidewalks on all new and improved local residential streets in Brookhaven. Bike lanes will also be required per the recommendations in Brookhaven's Bicycle, Pedestrian, & Trail Plan and other planning documents.

Additionally, on Tuesday, Oct.13, 2020 the Brookhaven City Council unanimously approved the Brookhaven Vulnerable Road User Ordinance that provides enhanced protections to non-vehicular users in the event of injury.  Vulnerable road users are outlined in the ordinance as walkers, bike riders, strollers, and scooter riders, among others on the road not operating a motor vehicle. The ordinance makes a separate offense of driving a motor vehicle in such a way an injury is caused to a vulnerable road user.

Under the ordinance, drivers must maintain a safe distance of at least three feet from vulnerable road users to avoid a collision. The ordinance also states that a driver should yield the right of way to vulnerable road users when making a turn at an intersection and outlines safe ways of passing a vulnerable road user on the road. For their part, vulnerable road users should keep to the right of the lane except for when to avoid unsafe conditions. Cyclists must use a white light at the front of the bicycle during nighttime and should yield the right of way to pedestrians. This ordinance is part of Brookhaven's commitment to providing safe and appropriate access to pedestrians and users of alternative modes of transportation. Anyone in violation of this ordinance could receive up to a $500 fine for the first offense and up to a $1,000 fine, suspension of driving privileges and/or six months of incarceration for consecutive offenses.

On June 29, 2017, Brookhaven Mayor John Ernst appointed members to the Peachtree Creek Steering Committee. The committee will provide critical oversight and guidance to the PATH Foundation as it completes engineering studies and prepares final construction of the Peachtree Creek Greenway.

Construction for Phase 1 of the Peachtree Creek Greenway was completed in late 2019 and celebrated its grand opening on Dec. 12, 2019. The Phase 1 of the multi-use trail provides resident access to bicycles and pedestrian trails and is 1.25 miles long stretching from North Druid Hills to Biarwood Road. Brookhaven's section of the Peachtree Creek Greenway is divided into three phases. When the construction for all three are completed, it will connect Brookhaven to unincorporated Dekalb and Atlanta.

The vision of the Peachtree Creek Greenway is to provide a transportation and recreational path that serves as a point of connectivity from the Atlanta Beltline to Doraville. The goal of the Greenway is to provide residents with easy access to bicycle and pedestrian trails, serve transportation and recreational needs, and help encourage quality of life and sustainable economic growth. When the entirety of the Peachtree Creek Greenway is completed it will be 12.3 miles long.

On March 14, 2017, the Weather Company, owners of the Weather Channel, announced to a group of Brookhaven Chamber members that they were in need of more office space and would be selecting a location in Brookhaven. They have since moved to Brookhaven.

Brookhaven continues to see major developments in its area. In March 2019, the Brookhaven City Council approved a request from CHOA to rezone four acres in order to build an 8-story short-term residential hotel (a Ronald McDonald House). The facility will allow families to temporary stay in the area while their children are being treated at CHOA. Furthermore, Emory University announced in May 2019 that it plans to build a billion dollar medical complex including a hotel, hospital, and apartments in Brookhaven.

Other developments in Brookhaven include planned improvements to its Lynwood Park facility thanks to its partnership with the Atlanta Hawks. The Atlanta Hawks Foundation made a donation, approved unanimously by the city council, for upgraded furnishing and site improvements to the existing basketball court at Lynwood Park. As of 2017, the Hawks new $50 million training facility is located in Brookhaven. 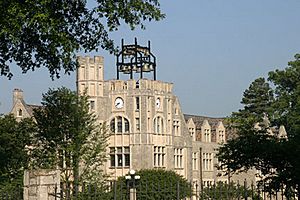 Colleges and universities in Brookhaven include Oglethorpe University as well Georgia State University's Brookhaven satellite campus for the Robinson College of Business MBA program. Both are located on Peachtree Road.

DeKalb County School System operates the public schools serving Brookhaven. The zoned public elementary schools within the city limits and serving the city are Ashford Park Elementary, Montclair Elementary, Montgomery Elementary, and Woodward Elementary. Additionally Fernbank and John Lewis elementaries, outside of the Brookhaven city limits, serve portions of the city. Montgomery Elementary is one of five residential public schools in all of Dekalb County to exceed 90% in every CRCT category. Kittredge Magnet School nurtures and empowers a diverse student body of high achievers in grades 4 through 6 through rigorous and innovative instructional approaches.

PATH Academy, a charter school, is in Brookhaven.

From its opening in 1990 until 2003, the Seigakuin Atlanta International School was located on the property of Oglethorpe University. This facility is now occupied by PATH Academy.

All content from Kiddle encyclopedia articles (including the article images and facts) can be freely used under Attribution-ShareAlike license, unless stated otherwise. Cite this article:
Brookhaven, Georgia Facts for Kids. Kiddle Encyclopedia.