Kids Encyclopedia Facts
This page is about the city. For the surname, see Chamblee (surname).

Chamblee ( SHAM-blee) is a city in northern DeKalb County, Georgia, United States, northeast of Atlanta. The population was 9,892 at the 2010 census.

The area that would later become Chamblee was originally dairy farms. During the late nineteenth century, an intersection of two railroads was constructed in Chamblee; one carried passengers from Atlanta to Charlotte, North Carolina, while the other ferried workers and goods back and forth from a factory in Roswell to Atlanta. A settlement known as Roswell Junction emerged at the intersection, and the United States Postal Service decided to establish a post office there. However, feeling the name of the settlement was too similar to nearby Roswell, they randomly selected Chamblee from a list of petitioners for the new post office name. Chamblee was incorporated in 1907.

During World War I and World War II, Chamblee served as the site of U.S. military operations. During World War I, the U.S. operated Camp Gordon, home to 40,000 servicemen. This influx of new people created a building boom in the town. Camp Gordon was closed after the war and then re-opened as Navy Flight Training Center at the advent of World War II.

Immediately after World War II, Chamblee experienced growth in blue-collar industry and residents due to its proximity to the newly opened General Motors plant in neighboring Doraville. Manufacturing plants also located along the newly constructed Peachtree Industrial Boulevard. By the 1980s, much of the city's industrial base had downsized or eroded; in its place sprung multi-ethnic business that catered to the immigrants and refugees moving to Chamblee and Doraville en masse due to the cities' affordable housing. By the time of the 1996 Summer Olympics, Chamblee had emerged as a multi-cultural city inhabited by a large immigrant community.

During the first decade of the 2000s, the city grew as it refined its image constructing a new city hall in 2002. In 2010, Chamblee annexed an area directly to the northwest that includes Huntley Hills and a resident population of around 5,000. It also renamed Peachtree Industrial Boulevard to Peachtree Boulevard, and took steps to revitalize its downtown.

There were 2,673 households, out of which 33.9% had children under the age of 18 living with them, 46.4% were married couples living together, 9.0% had a female householder with no husband present, and 30.8% were non-families. 15.8% of all households were made up of individuals, and 4.1% had someone living alone who was 65 years of age or older. The average household size was 3.57 and the average family size was 3.65. 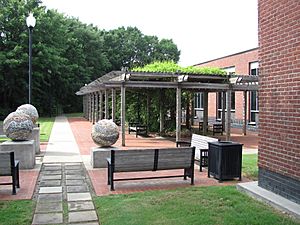 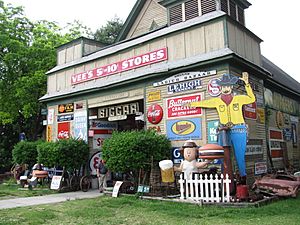 According to Biz Journal, the Atlanta metropolitan area is home to an "... estimated 50,000 Chinese-Americans...." This suburb of Atlanta, Georgia is home to a Chinatown (Chinese: 亚特兰大唐人街; pinyin: yà té lán dà táng rén jiē) that was built in 1988, and is one of the first of the "New Chinatowns" according to the World Journal. Although the city of Atlanta itself does not have a "Chinatown", Chamblee's Chinatown mall is referred to as "Atlanta Chinatown." The neighborhood is part of the Buford Highway international market area and is located near the Chamblee MARTA station and New Peachtree Road. According to the Atlanta Journal-Constitution (AJC), refers to this "Chinatown Mall" as "... Atlanta's place for Chinese culture." According to the official website, "Atlanta Chinatown" is located at 5379 New Peachtree Road. According to the Huffington Post, this Chinatown is an example of a "modern Chinatown", with Albany, Las Vegas, Dallas-Richardson, and North Miami Beach, Florida referenced as similar examples, with regard to the quality of Chinese food. There is an annual Chinese New Year event that is held to celebrate the festival. The author further states that Atlanta's Chinatown is "... unlike many older cities" which exists in an urban setting. Atlanta's Chinatown according to her is "... in a strip mall" setting. Bonnie Tsui further states in her book that the new Chinatowns rely on the Chinatown being built before the Chinese population comes as she quoted about Las Vegas' Chinatown.

The Atlanta Chinatown market open August 8, 1988, and was further expanded in 1996 with fresh immigrants from Beijing. According to the previous source, Atlanta's Chinatown has bakeries, restaurants, cosmetics, bookstores, newspaper and many other Chinese stores. The Chinatown is currently managed by Rochelle Anthony, who is an African American.

According to Biz Journal, Atlanta Chinatown was completely redone in the year 2000 by developer Peter Chang, who purchased the old "Chinatown Square Mall". The plans call for "...the 65,000-square-foot mall [to include] a Chinese food court which contains 7 vendors, two dine-in restaurants, several offices, a Dinho Supermarket, gift shops, a bookstore, jewelers, a video rental store, a beauty salon and other retailers. It will be part of the International Village project, a 375-acre live and work community with a global theme that is being developed by local business leaders, the DeKalb Chamber of Commerce, DeKalb County and the city of Chamblee." According to this article, the plans are to make Atlanta Chinatown a tourist destination rather than it just being another shopping mall.

Chamblee, south of Peachtree Blvd, is sometimes referred to as "Chambodia" due to its high Asian population and the concentration of Asian restaurants along Buford Highway in Chamblee. North of Peachtree Blvd, Chamblee is often referred to as "Chamwoody", due to its higher WASP population and proximity to Dunwoody Ga. A chapter of Tom Wolfe's novel A Man in Full is titled "Chambodia". 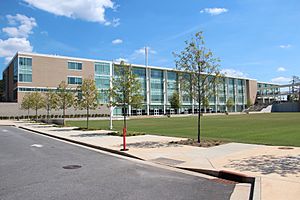 Kittredge Magnet School for High Achievers is in Brookhaven.

In the 2005–2006 school year the administration of Sophia Academy, previously in Sandy Springs, sought to establish a new campus and did a capital campaign. Construction began circa 2007. The new campus, in DeKalb County, was annexed into Chamblee. Sophia merged into Notre Dame Academy in Duluth, Georgia effective August 2017.

Currently, there are plans for the construction of a multi-use trail, known as the Peachtree Creek Greenway. The goal of the greenway is to provide residents with close-to-home and close-to-work access to bicycle and pedestrian trails, serve transportation and recreation needs, and help encourage quality of life and sustainable economic growth. The trail will connect the cities of Atlanta, Brookhaven, Chamblee and Doraville.

All content from Kiddle encyclopedia articles (including the article images and facts) can be freely used under Attribution-ShareAlike license, unless stated otherwise. Cite this article:
Chamblee, Georgia Facts for Kids. Kiddle Encyclopedia.