Doraville is a city in DeKalb County, Georgia, in the United States. The municipality is northeast of Atlanta. As of the 2010 census, the city had a population of 8,330.

Doraville was incorporated by an act of the Georgia General Assembly, approved December 15, 1871. From its development until the 1940s, Doraville was a small agricultural community that served the interests of a larger surrounding farming area.

At the end of World War II, Doraville was on a main railroad line, and had a new water system available. General Motors selected Doraville as the site for its new assembly plant. The growth of Doraville exploded in the late 1940s and the 1950s as a result. In the late 1940s, plans for Guilford Village, the first subdivision, were announced by Southern Builders and Engineering Company. The 112-home subdivision at Tilly Mill and Flowers Roads was to cover some 58 acres.

By the 1980s, Doraville and neighboring Chamblee attracted immigrants relocating to the Atlanta area who settled along Buford Highway. The result is one of the largest Asian communities in the country. Many Latin American countries are also represented. 56% of residents speak a language other than English as a first language.

The Doraville MARTA Station was built in 1992, destroying the few buildings that remained of Doraville's downtown.

The GM Doraville Assembly Plant closed in 2009, and the economy has stalled plans to turn the site into a mixed-use town center. Nonetheless, Doraville is becoming an attractive destination because of its close proximity to Atlanta, its MARTA Station, and the promise of a new town center. 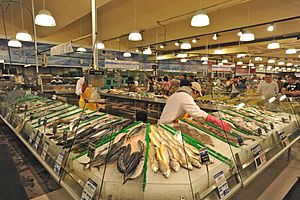 There were 2,998 households out of which 32.5% had children under the age of 18 living with them, 43.6% were married couples living together, 13.4% had a female householder with no husband present, and 33.9% were non-families. 21.8% of all households were made up of individuals and 5.3% had someone living alone who was 65 years of age or older. The average household size was 3.24 and the average family size was 3.62.

Doraville contains a large stock of mid-century modern houses, arguably the largest concentration in metropolitan Atlanta. Mid-Century architecture was frequently employed in residential structures with the goal of bringing modernism into suburbs developed in the era immediately following World War II, which is when the majority of homes in Doraville were constructed. This style emphasized creating structures with ample windows and open floor plans, with the intention of opening up interior spaces and bringing the outdoors in. Many Mid-century houses utilized then-groundbreaking post and beam architectural design that eliminated bulky support walls in favor of walls seemingly made of glass. Function was as important as form in Mid-Century designs, with an emphasis placed specifically on targeting the needs of the average American family. While the style in seen throughout Doraville, the Northwoods and Northcrest neighborhoods are the most well-preserved Mid-Century modern neighborhoods in the city. In Northcrest, over half of the homes are Mid-Century moderns, while Northwoods is one of only three surviving mid-century planned communities in Georgia.

Based on these unique architectural and planning features, the Northwoods Historic District was added to the National Register of Historic Places on June 2, 2014. The Northwoods Historic District consists of five adjoining residential neighborhoods, including Northwoods, Fleetwood Hills, Gordon Hills, Gordon Heights and Sequoyah Woods. The Northwoods, Gordon Hills and Gordon Heights neighborhoods are all located in the City of Doraville, and Sequoyah Woods and Fleetwood Hills are located in unincorporated DeKalb County.

All content from Kiddle encyclopedia articles (including the article images and facts) can be freely used under Attribution-ShareAlike license, unless stated otherwise. Cite this article:
Doraville, Georgia Facts for Kids. Kiddle Encyclopedia.