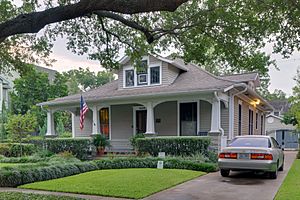 A bungalow home in Houston, Texas

A bungalow is a type of building, originally developed in the Bengal region in South Asia, but now found throughout the world. The meaning of the word bungalow varies internationally. Common features of many bungalows include verandas and being low-rise.

In Australia, the California bungalow associated with the United States was popular after the First World War.

In North America and the United Kingdom, a bungalow today is a house, normally detached, that may contain a small loft, many seen in Chicago and in Houston. It is either single-story or has a second story built into a sloping roof, usually with dormer windows (one-and-a-half stories).

All content from Kiddle encyclopedia articles (including the article images and facts) can be freely used under Attribution-ShareAlike license, unless stated otherwise. Cite this article:
Bungalow Facts for Kids. Kiddle Encyclopedia.