Lindfield is a suburb on the Upper North Shore of Sydney in the state of New South Wales, Australia. It is 13 kilometres north-west of the Sydney Central Business District and is in the local government area of Ku-ring-gai Council. East Lindfield is a separate suburb, although they share the postcode of 2070.

Lindfield was originally the home of the Kuringgai indigenous people.

Europeans first became active in the area in around 1810, when the colonial government set up a timber gathering camp staffed by convicts. By the 1840s, fruit growing and farming became the suburb's primary industries. Settlement began to increase in the latter half of the eighteenth century. The Lindfield railway station opened in 1890, and Lindfield Post Office opened on 5 January 1895. Land values increased in the area around the railway and more professionals moved into the area.

The name "Lindfield" means a clearing in the lime forest, and derives from the name given by an early landowner, Francis List, to a cottage he built in the area in 1884. List likely named his cottage after Lindfield, Sussex, England. When a railway line came through the area in 1890s, the name of the property was used to identify the station and neighbourhood.

During the years after World War II the suburb experienced significant growth. 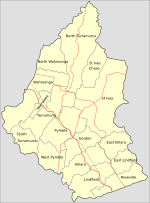 The University of Technology, Sydney, Kuring-gai Campus, (formerly The William Balmain Teachers College and then The Kuring-gai College Of Advanced Education,) operated at a campus on Eton Road from 1971 to 2015. It offered courses in business, nursing and midwifery, education and travel. The site was then closed in 2015 while an extensive interior fitout was undertaken. It was reopened ahead of the 2019 school year as The Lindfield Learning Village, an unconventional K-12 public school.

Commercial developments in Lindfield are situated along the Pacific Highway, Lindfield Shopping Village and nearby Tryon Road.

Lindfield Arcade was demolished in 2016 in order to facilitate the construction of residential apartments.

All content from Kiddle encyclopedia articles (including the article images and facts) can be freely used under Attribution-ShareAlike license, unless stated otherwise. Cite this article:
Lindfield, New South Wales Facts for Kids. Kiddle Encyclopedia.