East Lindfield is a suburb on the Upper North Shore of Sydney in the state of New South Wales, Australia. East Lindfield is located 13 kilometres north-west of the Sydney Central Business District in the local government area of Ku-ring-gai Council. Lindfield is a separate suburb, although they both share the postcode of 2070. 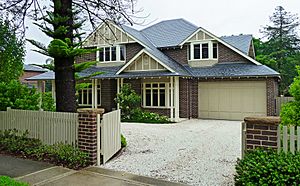 Lindfield means "lime tree field". The Lindfield area was settled in the 1850s. The name derives from the native town of early landowner Mr List, who named his house after Lindfield, Sussex, England. When the railway line came through the area in 1890s, the name of the property was used to identify the station and neighbourhood.

East Lindfield became a separate suburb from Lindfield when it was gazetted on 5 August 1994.

All content from Kiddle encyclopedia articles (including the article images and facts) can be freely used under Attribution-ShareAlike license, unless stated otherwise. Cite this article:
East Lindfield, New South Wales Facts for Kids. Kiddle Encyclopedia.