Roseville is a suburb on the Upper North Shore of Sydney in the state of New South Wales, Australia 12 kilometres (7.5 mi) north-west of the Sydney central business district. It is within the local government areas of Ku-ring-gai and Willoughby. Roseville Chase is a separate suburb to the east. 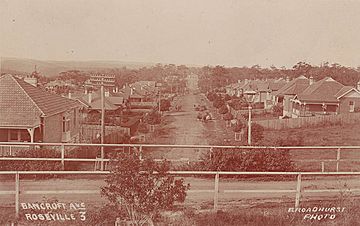 Bancroft Avenue, Roseville, as it appeared in a postcard taken in the period 1900–1927.

William Henry was one of Ku-ring-gai's first European settlers, who used the area for farming. There were a few fruit orchards and market gardens in the area. Other significant settlers were David Mathew, who owned a property called Clanville, and Richard Archbold, who was granted an area of 600 acres (2.4 km2) adjacent to Clanville. Archbold later acquired Clanville and set up an orchard on the property. Archbold's son-in-law had a stone cottage called Rose Villa, which was later demolished to make way for the North Shore railway line. Roseville eventually derived its name from Rose Villa.

Babbage Road was named for Eden Herschel Babbage (a grandson of Charles Babbage), a retired banker who lived in "Rawhiti" on Clanville Road. Dubbed the "Father of Roseville", he was largely responsible for developing Roseville Park, Davidson Park and Roseville Chase. His brother-in-law, Francis Robert Burton, donated the large pavilion in Roseville Park, following the death in 1913 of brother William Burton, of "Woodlands" on Bancroft Avenue.

The Australian photographer Harold Cazneaux (1878 to 1953) lived for much of his life in a Federation home called "Ambleside", located in Dudley Avenue.

At the time of his appointment as Premier of New South Wales in 2011, Barry O'Farrell lived with his family in Roseville, but as of 2012 resided at nearby Turramurra. As a member of parliament, Barry O'Farrell represented the electoral district of Ku-ring-gai, which Roseville falls within.

Roseville is the southern-most suburb in the municipality of Ku-ring-gai. It is a residential suburb, with medium to low density housing and lies between Findlay Avenue and Ashley Street to the south; and Bayswater Road, Abingdon Road, Chelmsford Avenue and Carnarvon Road to the north. A narrow section of the southernmost area of Roseville, between Ashley Street and Boundary Street, is in the Willoughby municipality. To the east, Roseville is bounded by the waterways of Middle Harbour and Moores Creek, and to the west it is bounded by the Lane Cove National Park. Roseville Chase is surrounded by Babbage Road, Middle Harbour and Moores Creek, and is bisected by Warringah Road, which Roseville Bridge carries over Middle Harbour. The names "Roseville West", "Roseville East" and "East Roseville" are no longer in official use.

Characterised by its lush and leafy roadsides, parks, and gardens; Roseville property prices are considerably higher than the Sydney average. Houses closer to railway station tend to be constructed in the Federation (c. 1890s to 1920s) and Californian bungalow (c. 1920s to 1930s) architectural styles, with the outer areas developed during the 1940s and 1950s in less ornate styles. Since this time, a small portion of these older homes have been demolished and replaced with new development properties. The government is also considering to place Roseville under a Heritage listed area as many of the homes and gardens in and around Roseville are a certain style that dates back to the 1950s. The former Commonwealth Bank is a notable art deco building on the Pacific Highway.

All content from Kiddle encyclopedia articles (including the article images and facts) can be freely used under Attribution-ShareAlike license, unless stated otherwise. Cite this article:
Roseville, New South Wales Facts for Kids. Kiddle Encyclopedia.