Roseville Chase is a suburb on the Upper North Shore of Sydney in the state of New South Wales, Australia 11 kilometres north-west of the Sydney central business district, in the local government areas of Ku-ring-gai Council. Roseville is a separate suburb to the west.

Located on Middle Harbour at its uppermost reaches, Roseville Chase is a secluded and bushy suburb.There are two main geographical and socio-economic subdivisions in Roseville Chase. The Chase Lowlands are centred on lower confines of Babbage Road, while the Chase Heights are centred on elegant Calga Street, offering commanding views down to the harbour and beyond. North of Warringah Road, the residential development is lighter and is largely surrounded by bushland. The area is defined by the gully of Moores Creek to the west and north, plus Middle Harbour to the east. Much of the surrounding bushland is contained within Garigal National Park.

Captain Arthur Phillip's search for "good land, well watered" led to the discovery and colonisation of the rough shores of Roseville Chase, where Samuel Bates built a farm at Echo Point on the edge of what is now Middle Harbour.

The area was also inhabited by Aboriginal people, who left their mark in the form of hand stencils that can be seen in rock shelters in the area.

Later, the area was settled by Europeans like David Mathew and Richard Archbold, whose property eventually extended to Moores Creek and became the site of an orchard.

During World War I the area was used as a training area for army engineers under the command of John (later Sir John) Madsen.

Many people lived in the Sydney bush during the Great Depression. Remains of dwellings can be found in the bush at Roseville Chase, north of Chase Avenue. 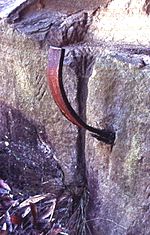 Remains of a bush dwelling

All content from Kiddle encyclopedia articles (including the article images and facts) can be freely used under Attribution-ShareAlike license, unless stated otherwise. Cite this article:
Roseville Chase, New South Wales Facts for Kids. Kiddle Encyclopedia.