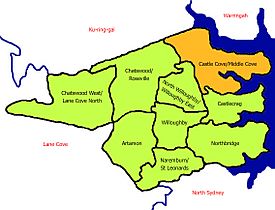 Castle Cove is a suburb on the lower North Shore of Sydney, in the state of New South Wales, Australia. Castle Cove is located 11 km (6.8 mi) north of the Sydney central business district, in the local government area of the City of Willoughby. Castle Cove is situated on the western side of Middle Harbour.

It is believed that Castle Cove was named after the estate of Henry Hastings Willis, a prominent member of the Parliament of New South Wales at the time. Innisfallen Castle is his Gothic style house built over 18 months from 1903-1905 using sandstone quarried on the estate. Situated on the ridge of Castle Cove, the building overlooks Sugarloaf Bay and is a landmark that can be seen from various places in the area.

During the mid-1980s, a plan by the NSW Roads and Traffic authority to extend the Warringah Freeway along the north edge of Castlecrag was abandoned following an outcry from local residents. This would have extended the Warringah freeway to the area of its name, and bypassed the heavily congested Military Road and Warringah Road links to the Northern Beaches of Sydney. The plan involved the construction of a bridge from the eastern end of Castlecrag over Middle Harbour to Seaforth. Following this, a plan to route the Warringah Freeway through Castle Cove, was rejected for the same reasons as above.

Around 1985, the descendants of Henry Willis attempted to subdivide the land around the Castle, to be used for construction of several town houses, and turn the Castle into a wedding reception centre. As the land earmarked for the town houses was previously donated to the Castle owners by the government to enhance the Castle grounds, it was felt that profiting from this was inappropriate. As a result, Willoughby Council rejected the rezoning required to build the townhouses. Permission to run a business from the Castle was also rejected. The Castle owners then sold the property for approx $4 million, via an onsite public auction.

Castle Cove Public School is a co-educational public school. It accommodates students from years Kindergarten to 6.

All content from Kiddle encyclopedia articles (including the article images and facts) can be freely used under Attribution-ShareAlike license, unless stated otherwise. Cite this article:
Castle Cove, New South Wales Facts for Kids. Kiddle Encyclopedia.