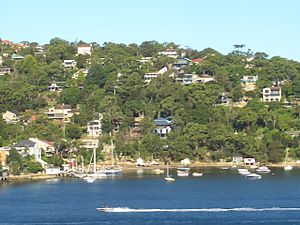 View of Seaforth from Mosman

Seaforth is a suburb of northern Sydney, in the state of New South Wales, Australia. Seaforth is located 12 kilometres north-east of the Sydney central business district in the local government area of Northern Beaches Council and is part of the Northern Beaches region.

Seaforth overlooks Middle Harbour and is linked south to Mosman by the Spit Bridge. To the west, Seaforth overlooks Sugarloaf Bay across to the suburbs of Northbridge, Castlecrag and Castle Cove. The Garigal National Park sits on the northern border.

Seaforth was named after Loch Seaforth and Seaforth Island in Scotland. The land in this area was once owned by Henry Halloran, who subdivided it in 1906.

The Seaforth library was built in 1887 and protected by heritage listing by Manly Council in 1995. It stands outside the former Seaforth TAFE. Seaforth celebrated its centenary on Sunday 12 November 2006 with a historical display in the town centre.

All content from Kiddle encyclopedia articles (including the article images and facts) can be freely used under Attribution-ShareAlike license, unless stated otherwise. Cite this article:
Seaforth, New South Wales Facts for Kids. Kiddle Encyclopedia.