Clontarf (Irish: Cluain Tarbh, meaning "meadow of the bull") is a suburb of northern Sydney, in the state of New South Wales, Australia. Clontarf is located 13 kilometres north-east of the Sydney central business district in the local government area of Northern Beaches Council, in the Northern Beaches region. 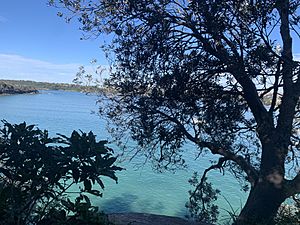 Clontarf is named after the Clontarf district in Dublin, Ireland.

The son of Queen Victoria, Prince Alfred, Duke of Edinburgh visited Clontarf in 1868 where he was shot in the back by an Irishman, Henry James O'Farrell. Alfred was ingloriously saved because the bullet struck him at a point where his India-rubber braces, holding his trousers up, crossed over. The bullet was deflected around his rib-cage and did no major harm.

According to the 2016 census, there were 1,737 residents in Clontarf. Sixty-three per cent of people were born in Australia. The next most common country of birth was England at 11.9%. Eighty-one per cent of people only spoke English at home. The most common responses for religion were No Religion 31.5%, Catholic 23.4% and Anglican 21.4%.

All content from Kiddle encyclopedia articles (including the article images and facts) can be freely used under Attribution-ShareAlike license, unless stated otherwise. Cite this article:
Clontarf, New South Wales Facts for Kids. Kiddle Encyclopedia.