East Killara is a suburb on the Upper North Shore of Sydney in the state of New South Wales, Australia. East Killara is located 15 kilometres north of the Sydney Central Business District in the local government area of Ku-ring-gai Council. Killara is a separate suburb to the south-west, which shares the postcode of 2071.

East Killara is set in peaceful bushland. The main road is Koola Avenue which extends from Birdwood Avenue to Albany Crescent. 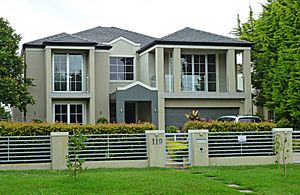 Killara is an Aboriginal word meaning permanent or always there.

East Killara was gazetted as a separate suburb from Killara on 5 August 1994.

At the 2011 census, there were 2,880 residents in East Killara. More than half of residents were born outside of Australia, with the top other countries of birth being China 9.7%, Hong Kong 7.9%, England 5.9%, Republic of South Korea 3.1% and South Africa 2.7%. There was a high rate (47.4%) of speaking languages other than English at home; other languages included Cantonese 18.4%, Mandarin 9.0% and Korean 3.7%. The most common religion was "no religion". East Killara residents had high incomes, with a median weekly household income of $2,339 compared to the national average of $1,234. The majority of private dwellings were separate houses (99.6%) and there were no units or apartments in the suburb. The average household size was 3.2 people.

All content from Kiddle encyclopedia articles (including the article images and facts) can be freely used under Attribution-ShareAlike license, unless stated otherwise. Cite this article:
East Killara Facts for Kids. Kiddle Encyclopedia.