Norcross is a city in Gwinnett County, Georgia, United States. The population as of the 2010 census was 9,116, while in 2018 the estimated population was 16,563. It is included in the Atlanta-Sandy Springs-Marietta metropolitan statistical area. 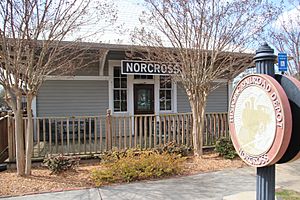 Named for former Atlanta Mayor Jonathan Norcross, it was chartered as a town on October 26, 1870.

The city sits along the Eastern Continental Divide. Streams to the west of the city center travel to the Chattahoochee River and ultimately the Gulf of Mexico, while streams to the east flow to the Yellow River, a tributary of the Ocmulgee River, which flows to the Atlantic Ocean north of Brunswick. This divide, or ridge, played a significant role in the early settlement of the area. Originally, the Creek and Cherokee people occupied this land, and the ridgeline was used as a major transportation route. Two American forts were established in the early 19th century due to the War of 1812: Fort Daniel (at Hog Mountain) and Peachtree Fort (in Atlanta). These two forts were connected by this old Indian trail which became known as the original Peachtree Road. By around 1840, this trail had evolved into a stagecoach route connecting South Carolina and Alabama through Georgia. The surrounding area became populated, and the small communities of Pinckneyville and Flint Hill prospered.

This all changed with the creation of the Richmond-Danville Railroad, designed to open up the wilderness areas of northeast Georgia. The railroad was proposed in 1856 by Jonathan Norcross (a former Atlanta mayor) and was subsequently approved. Construction was delayed, however, until 1866 because of the Civil War. On September 12, 1869, the first 20 miles (32 km) were completed. On October 16, 1889, John J. Thrasher bought the 250 acres (1.0 km2) surrounding the terminal for $1,650, and a town was born – named for Thrasher's good friend, Jonathan Norcross. The Brunswick Hotel was built in 1870, and Norcross quickly became known as a resort area, much like East Lake, for Atlantans wanting to escape the rapidly growing city. The new town also meant the demise of the surrounding communities of Pinckneyville and Flint Hill, as people migrated in to build houses, churches, schools, and to be near the railroad.

Norcross, Gwinnett County's second oldest city, saw new roads and highways which were later built by-pass the city, preserving its historic center as a 19th-century railroad town. The Norcross Historic District, comprising the center of town, was added to the National Register of Historic Places in 1980.

As of 2016, the town has had an influx of Hispanic immigration, leading the white non-Hispanic population to shrink from 95% to 20% in a generation.

The ABC Studios television show Resurrection was filmed in the town square and all around Norcross.

The Western Gwinnett Bikeway, is a multi-use trail along the Peachtree Industrial Boulevard. It is a shared use path, cycle track, and bike lane that connects Norcross to neighboring Duluth.

In September 2015, the Norcross City Council approved plans to do a concept study on developing the Beaver Ruin Creek Greenway. The greenway could serve to connect Norcross residents to the Peachtree Creek Greenway that is being developed in Atlanta, Brookhaven, Chamblee and Doraville.

All content from Kiddle encyclopedia articles (including the article images and facts) can be freely used under Attribution-ShareAlike license, unless stated otherwise. Cite this article:
Norcross, Georgia Facts for Kids. Kiddle Encyclopedia.