Downtown Atlanta is the central business district of Atlanta, Georgia, United States. The largest of the city's three commercial districts, Downtown is the location of many corporate or regional headquarters; city, county, state and federal government facilities; Georgia State University; sporting venues; and most of Atlanta's tourist attractions. Downtown measures approximately four square miles, and had 26,700 residents as of 2010. Similar to other central business districts in the U.S., Downtown has recently undergone a transformation that included the construction of new condos and lofts, renovation of historic buildings, and arrival of new residents and businesses.

Downtown is bound by North Avenue to the north, Boulevard to the east, Interstate 20 to the south, and Northside Drive to the west. This definition of Downtown Atlanta includes central areas like Five Points, the Hotel District and Fairlie-Poplar and outlying inner city neighborhoods such as SoNo and Castleberry Hill.

The Atlanta Downtown Improvement District (ADID) organization, though, defines a much smaller downtown area measuring just one and two tenths square miles. This area is roughly bound by North Avenue to the north, Piedmont Avenue and the Downtown Connector to the east, Martin Luther King Junior Drive, Courtland Street, and Edgewood Avenue to the south, and the railroad tracks to the west. This area only includes the core central business district neighborhoods of Fairlie-Poplar, Five Points, the Hotel District, Centennial Hill, and South Downtown. 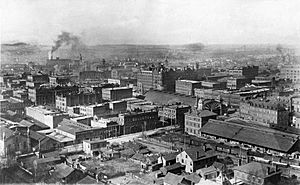 The history of downtown began in 1826 with Wilson Lumpkin and Hamilton Fulton surveying a possible railroad route between Chattanooga, Tennessee, and Milledgeville, Georgia's capital at the time. In 1833, Lumpkin, who had become governor, requested that the state legislature charter three railroad lines. By 1836, the state-financed Western and Atlantic Railroad, linking the middle of Georgia to the other states north and west, was founded by the legislature and signed into law by Lumpkin. As a result, the town named Terminus was founded in 1837, named for the end of the railroad line. Terminus received a name change in 1842 when the town's 30 inhabitants voted to change the town's name to Marthasville, in honor of Governor Lumpkin's daughter.

By 1845, John Edgar Thomson, chief engineer of the Georgia Railroad, suggested that Marthasville's name be changed. The first suggestion was "Atlantica-Pacifica," which was shortened to "Atlanta." In 1847, Atlanta was incorporated, with the town limits extending in a one-mile (1.6 km) radius from the mile marker at the railroad depot.

By the outbreak of the Civil War, Atlanta was a major railroad hub and manufacturing center, making it a target for the Union Army. In 1864, General William T. Sherman burned Atlanta to the ground during his "March to the Sea," making Atlanta the only major American city to ever be destroyed by war. 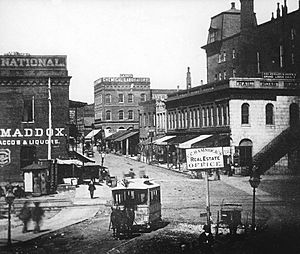 Atlanta's first resurgence began during Reconstruction. In 1868, Georgia's state capital was moved to the city from Milledgeville. By the 1920s, a downtown business sector ringed by residential districts had emerged.

Professional sports came to Atlanta in 1965 with the construction of Atlanta-Fulton County Stadium and the relocation of the Braves from Milwaukee. The National Football League awarded the city the Falcons expansion team in 1966. The Hawks arrived in 1968, even though Omni Coliseum, the city's basketball arena, did not open until 1972. Atlanta's three major league sports team continue to play their home games downtown in updated facilities: Turner Field, the Georgia Dome, and Philips Arena. 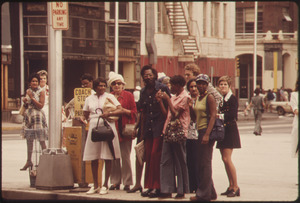 Downtown commuters waiting for a bus in the 1970s

Business growth in the 1970s resulted in significant development in Downtown, most notably in Peachtree Center and the Hotel District. However, economic development in these areas shifted the commercial center of the city to an area along Peachtree Street that was north of Five Points, despite the construction of the MARTA central station there in 1975. By the mid-1980s, Peachtree Center had become the core of a dedicated hotel-convention district that lay at the heart of the Downtown economy, even as the remainder of Downtown Atlanta deteriorated markedly. The closure of Underground Atlanta in 1979 due to an increase in crime contributed to perceptions that Downtown was dangerous, and the 1980s saw a significant decline in population. By 1990, Five Points was a "vacant shell of its former self," while Downtown as a whole was largely an "archepelagic assemblage of fortified enclaves inhabited in the daylight hours by government office workers, conventioners, and college students, and in the night by a substantial population of homeless persons."

The 1996 Olympic Games, along with the transformation of Georgia State University from a commuter school to a traditional college, initiated a resurgence of Downtown that continues today. They resulted in Centennial Olympic Park, which was built as a physical memorial to the games in the former industrial area west of Five Points. In the following decade, Centennial Olympic Park spurred the creation of a Downtown tourist district anchored by the World of Coca-Cola, the Georgia Aquarium, the CNN Center, the Center for Civil and Human Rights, and the College Football Hall of Fame. Following the 1996 games, Georgia State University president Carl Patton, an urban planner, initiated a University-led transformation of Downtown that sought to make Georgia State "a part of the city, not apart from the city." Dubbed the Main Street Master Plan, Patton's vision has been executed through billions of dollars of urban construction, boosting Downtown's economy and population.

On March 14, 2008, at approximately 9:40 PM Eastern Daylight Time, a category EF2 tornado hit Downtown with winds up to 135 miles per hour (217 km/h). It caused damage to Philips Arena, the Georgia Dome, Centennial Olympic Park, the Westin Peachtree Plaza Hotel, the CNN Center, and the Georgia World Congress Center. This was the first time a tornado touched ground in Downtown since weather records keeping began in the 1880s. While there were dozens of injuries, there was only one fatality. 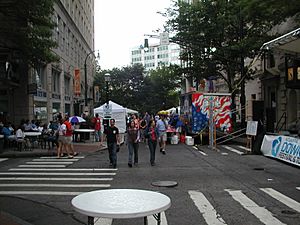 Downtown is the heart and the largest of the three business districts of the city. This area contains striking architecture dating as far back as the 19th century. Some of the most famous and/or tallest buildings in Downtown include: 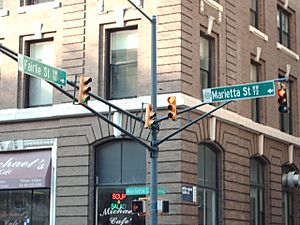 Downtown is divided into nine subdistricts: 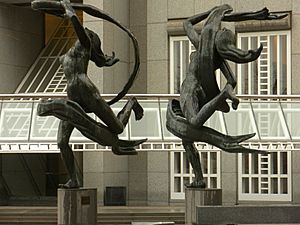 Woodruff Park, named after Robert W. Woodruff, is a 6-acre (24,000 m2) park in Downtown located a block away from Five Points. The park is the location of the iconic Phoenix Memorial, which memorializes Atlanta's rise from the ashes of the Civil War. Built as a legacy of the 1996 Olympic Games, Centennial Olympic Park, located on 21-acre (85,000 m2) area of Downtown, is the largest downtown park in the United States developed in the last 25 years. A famous part of the park is the Fountain of Rings, the world's largest interactive fountain utilizing the Olympic symbol of five interconnecting rings. The park hosts many events, such as music concerts and a fireworks display for the Independence Day holiday. Hurt Park with its fountain was an attraction in the 1940s and 1950s and a reminder of a bygone age. 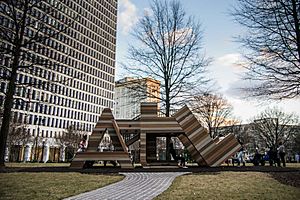 Just north of Centennial Olympic Park is the Georgia Aquarium, the world's second largest aquarium, after the Singapore aquarium built in 2012, with more than 8 million US gallons (30,000 m3) of fresh and marine water. It is listed as one of the "1,000 Places to See Before You Die". The World of Coca-Cola, situated near the Georgia Aquarium at Pemberton Place, is a permanent exhibition to the history of Coca-Cola. Downtown is in the process of bringing new attractions to the area, particularly in the area clustered around Centennial Olympic Park. In June 2008, Atlanta was selected for the future home of the National Health Museum. It will be near Centennial Olympic Park where it is estimated to attract between 1.1 and 1.4 million visitors per year.

Downtown is a transportation hub for the entire region. The Downtown Connector runs north and south through the district. The Connector is the primary freeway artery for the city. Downtown is also served by Interstate 20, which creates the southern border of Downtown. Downtown also has many surface streets that serve as alternatives to the Downtown Connector. MARTA's east-west and north-south subway lines converge in the middle of Downtown at the Five Points MARTA station. The North-South Line has four additional stops in Downtown-Garnett (in South Downtown), Peachtree Center, and Civic Center (in SoNo). The East-West line has two additional stops in Downtown-Dome/Philips Arena/GWCC/CNN and Georgia State.

All content from Kiddle encyclopedia articles (including the article images and facts) can be freely used under Attribution-ShareAlike license, unless stated otherwise. Cite this article:
Downtown Atlanta Facts for Kids. Kiddle Encyclopedia.