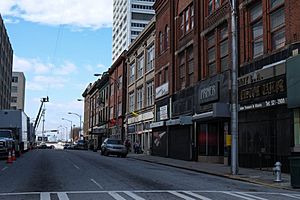 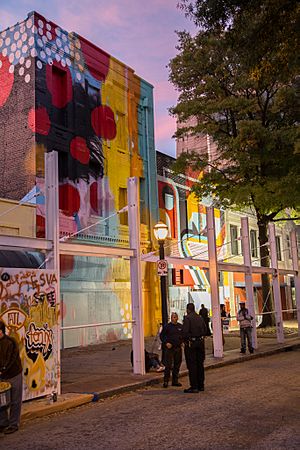 South Downtown is a historic neighborhood of Downtown Atlanta, Georgia, United States. South Downtown is primarily home to city, county, state, and federal governmental offices, which prompted the city to adopt signage declaring the area "Government Walk." Although much of South Downtown is dominated by surface parking lots, the neighborhood was passed over during the redevelopment boom of the 1960s and 1970s that resulted in the demolition of much of Downtown's architecturally significant buildings. The result is myriad buildings from the 1950s and earlier that retain their historic structural integrity.

South Downtown is located north of I-20, east of Castleberry Hill, south of Five Points, and west of I-85. Underground Atlanta is the primary shopping and entertainment center near South Downtown and it, along with the railroad gulch ("The Gulch"), separates the district from Five Points and the Hotel District. 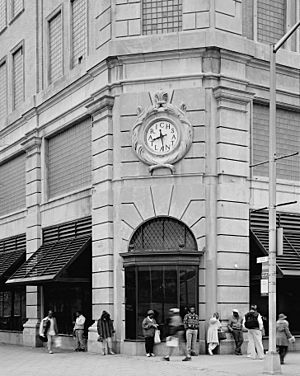 Rich's 1924 store, the anchor of the South Downtown shopping district until its closure in 1991

South Downtown was once a bustling shopping district. Whitehall Street, renamed Peachtree Street Southwest, was the principal shopping street of Atlanta from the 1850s until the mid-20th century. A source from 1854 reported that the street was "being built up with stores of brick", while Broad Street was the market district. The City of Atlanta historians refer to the area as the "Heart of Atlanta" commercial district.

In the late 19th and early 20th centuries, a cluster of department stores was located in the area. In the 1870s, the "Big Five" were Rich's, Chamberlain, Boyton, & Co., Ryan's; Keeley's; and Dougherty's; later, the J.M. High Company would join their leagues. By the 1930s, Rich's would come to dominate the South Downtown shopping district. In 1949, Whitehall was filled with five and dime stores, such as McCrory's, S. H. Kress, Woolworth's, and W. T. Grant.

As late as 1968 the northern end of Whitehall was still called a "bustling retail corridor". Today, Peachtree Street Southwest continues as a low-end shopping area with several of the older retail buildings converted into "malls": Metro Mall in the old McCrory's building and the Mall at 82 Peachtree, in the Rich's 1906 building. And landmark Miller's Rexall Drugs continues its trade in hoodoo and homeopathic remedies at Broad and Mitchell streets, as it has since 1965. 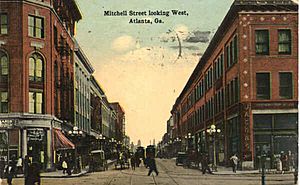 Located in South Downtown is Hotel Row, both a National Register and locally listed historic district consisting of one block of early 20th century commercial buildings, 3-4 stories high, located on Mitchell Street west of Forsyth Street. The building were originally hotels built to serve the needs of passengers from Terminal Station, opened in 1905 and demolished in 1971. The buildings are the most intact row of early 20th century commercial structures in the city in Atlanta's original business district. The decline of Hotel Row began in the 1920s due to the increased availability of automobile transportation and the construction of the Spring Street viaduct, which made getting to hotels in the northern part of the city easier. 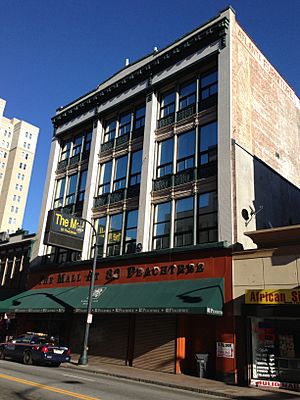 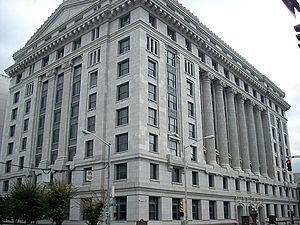 The exterior of the Fulton County Courthouse, located at 136 Pryor Street SW 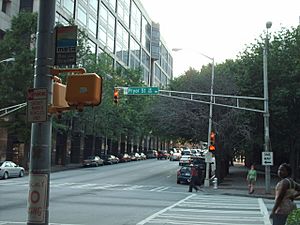 Pryor Street, with the Fulton County Government Center building to the left 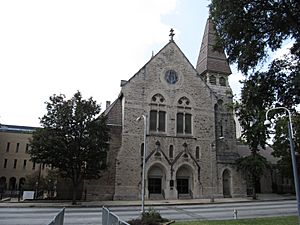 Central Presbyterian Church, located across from the Georgia State Capitol

Many commuters from the southern suburbs who work in Downtown travel on South Downtown's streets when heading to work. Many streets in this district are one-way, similar to the other districts that make up Downtown.

All content from Kiddle encyclopedia articles (including the article images and facts) can be freely used under Attribution-ShareAlike license, unless stated otherwise. Cite this article:
South Downtown Facts for Kids. Kiddle Encyclopedia.