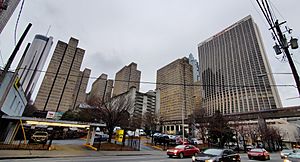 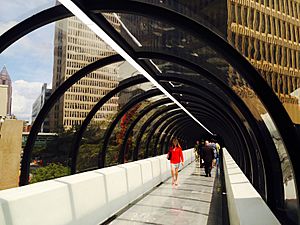 Skywalks are a defining feature of Peachtree Center

Intended to be the new downtown for Atlanta, Peachtree Center emerged as a distinct district in the early 1970s as a networked realm of convention hotels, shopping galleries, and office buildings a quarter-mile north of Five Points. Peachtree Center is notable for its uniform embodiment of the modern architectural style popular at the time. Yet the defining feature of Peachtree Center is its insular orientation, which allows patrons and workers to avoid interacting with the street level by traversing the area through sky bridges. By the mid-1980s, Peachtree Center had become the core of a dedicated hotel-convention district that lay at the heart of the Downtown economy, even as the remainder of Downtown Atlanta deteriorated markedly.

While at the time Peachtree Center was considered the salvation of a decaying downtown Atlanta, contemporary city planning is highly critical of such insular environments that "turn their back" on the city streets. Thus, as intown Atlanta began its post-1990 resurgence, Peachtree Center was increasingly criticized as an area that epitomized contemporary Atlanta's generic urbanity and sense of placelessness. Other critics claim that Peachtree Center is disorienting, killed downtown street-life, and disregarded the existing urban context.

The center was recognized for its architecture with listing on the National Register of Historic Places in 2018. 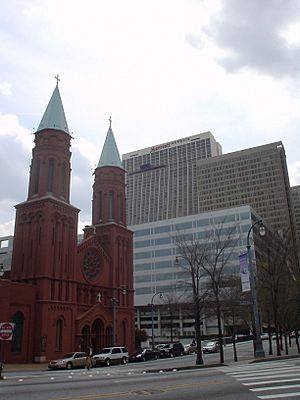 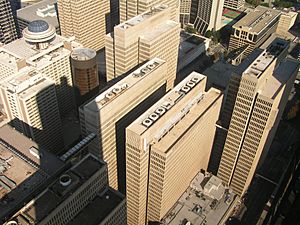 The beige buildings of Peachtree Center

The U.S. Census Bureau has its Atlanta Regional Census Center in Suite 1000 in the Marquis Two Tower. Several additional U.S. Government agencies have their southeast regional offices located in the Harris Tower, including the Department of Transportation, Department of Labor, Small Business Administration, and Internal Revenue Service.

All content from Kiddle encyclopedia articles (including the article images and facts) can be freely used under Attribution-ShareAlike license, unless stated otherwise. Cite this article:
Peachtree Center Facts for Kids. Kiddle Encyclopedia.