The Candler Building is a 17-story highrise at 127 Peachtree Street, NE, in Atlanta, Georgia. When completed in 1906 by Coca-Cola magnate Asa Griggs Candler, it was the tallest building in the city. This location where Houston (now John Wesley Dobbs Ave) joins Peachtree Street was the location of one of the earliest churches in the city which was built on land donated by Judge Reuben Cone in the 1840s. It forms the northern border of Woodruff Park.

Central Bank and Trust, the bank founded by Coca-Cola co-founder Asa Griggs Candler, had its headquarters in the building. 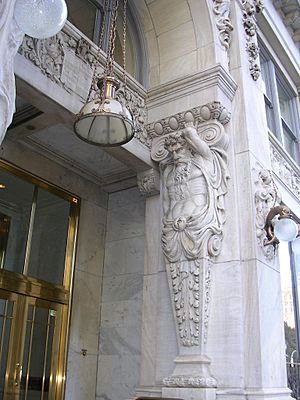 The Beaux-Arts details remain intact and the building is on the National Register of Historic Places. The cornerstone reads "Candler Investment Co. 1904 Geo. E. Murphy Architect".

The building was featured in the 2017 crime film Baby Driver, where it was the site of the first bank robbery committed in the film.

In 2016, the building's owner, REM Associates, L.P., announced plans to convert it to a luxury boutique hotel. The Candler Hotel, Curio Collection by Hilton opened on October 24, 2019. The 265-room hotel retains the building's iconic lobby, with a restaurant named By George in the former Central Bank and Trust location, and 6,000 square feet (560 m2) of meeting space.

All content from Kiddle encyclopedia articles (including the article images and facts) can be freely used under Attribution-ShareAlike license, unless stated otherwise. Cite this article:
Candler Building (Atlanta) Facts for Kids. Kiddle Encyclopedia.