Buckhead is an affluent uptown district of Atlanta, Fulton County, Georgia, comprising approximately the northern fifth of the city. Buckhead is a major commercial and financial center of the Southeast, and it is the third-largest business district in Atlanta, behind Downtown and Midtown. The district's highrise office buildings, hotels, and condominiums form a highly urbanized core along Peachtree Road. Surrounding this dense core are Buckhead's residential neighborhoods, which feature large single-family homes situated among dense forests and rolling hills.

In 1838, Henry Irby purchased 202 1/2 acres surrounding the present intersection of Peachtree, Roswell, and West Paces Ferry roads from Daniel Johnson for $650. Irby subsequently established a general store and tavern at the northwest corner of the intersection. The name "Buckhead" comes from a story that Irby killed a large buck deer and placed the head in a prominent location. Prior to this, the settlement was called Irbyville. By the late 1800s, Buckhead had become a rural vacation spot for wealthy Atlantans. In the 1890s, Buckhead was rechristened Atlanta Heights but by the 1920s it was again "Buckhead". 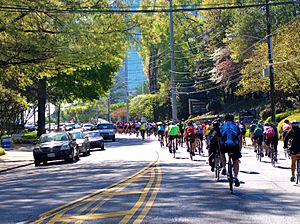 A cycling event, "Georgia Rides to the Capitol," on Piedmont Road

Buckhead remained dominated by country estates until after World War I, when many of Atlanta's wealthy began building mansions among the area's rolling hills. Despite the stock market crash of 1929, lavish mansions were still constructed in Buckhead throughout the Great Depression. In 1930, Henry Aaron Alexander built one of the largest homes on Peachtree Road, a 15,000-square-foot (1,400 m2) house with 33 rooms and 13 bathrooms. The community was annexed by Atlanta in 1952, following an earlier attempt by Mayor William B. Hartsfield in 1946 that was voted down by residents.

Buckhead's black neighborhoods, including Johnsontown, Piney Grove, Savagetown and Macedonia Park, were razed beginning in the 1940s. In 1956, an estate known as Joyeuse was chosen as the site for a major shopping center to be known as Lenox Square. The mall was designed by Joe Amisano, an architect who designed many of Atlanta's modernist buildings. When Lenox Square opened in 1959, it was one of the first malls in the country, and the largest shopping center in the Southeastern U.S. Office development soon followed with the construction of Tower Place in 1974.

To reverse a downturn in Buckhead Village during the 1980s, minimum parking spot requirements for bars were lifted, which quickly led to it becoming the most dense concentration of bars and clubs in the city, such as BAR, World Bar, Lulu's Bait Shack, Mako's, Tongue & Groove, Chaos, John Harvard's Brew House, Paradox, Frequency & Havana Club.

Beginning in 2000, residents sought to ameliorate the crime situation by taking measures to reduce the community's nightlife and re-establish a more residential character. The Buckhead Coalition's president and former Atlanta Mayor Sam Massell, along with councilwoman Mary Norwood were instrumental in persuading the Atlanta City Council to pass a local ordinance to close bars at 2:30 AM rather than 4 AM, and liquor licenses were made more difficult to obtain. Eventually, most of the Buckhead Village nightlife district was acquired for the "Buckhead Atlanta" multi-use project, and many of the former bars and clubs were razed in 2007. 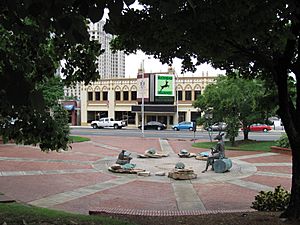 Charlie Loudermilk Park and the Buckhead Theater in Buckhead Village

In 2008, a newsletter by the Fulton County Taxpayers Foundation began circulating that proposed the secession of Buckhead into its own city after more than 50 years as part of Atlanta. This came on the heels of neighboring Sandy Springs, which finally became a city in late 2005 after a 30-year struggle to incorporate, and which triggered other such incorporations in metro Atlanta's northern suburbs. Like those cities, the argument to create a city of Buckhead is based on the desire for more local control and lower taxes.

Buckhead was originally the central area now called "Buckhead Village". The current usage of the term Buckhead roughly covers the interior of the "V" formed by Interstate 85 on the east and Interstate 75 on the west. Buckhead is bordered by Cumberland and Vinings in Cobb County to the northwest, the city of Sandy Springs to the north, Brookhaven and North Druid Hills in DeKalb County to the east, Midtown Atlanta to the south, and West Midtown to the west.

Buckhead comprises most of the neighborhoods of Atlanta's north side, 43 in total.

The southernmost area around the Brookwood and Ardmore neighborhoods is sometimes regarded as a separate neighborhood of "South Buckhead". 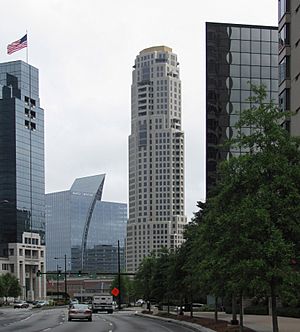 Since at least the 1950s, Buckhead has been known as a district of extreme wealth, with the western and northern neighborhoods being virtually unrivaled in the Southeast. In 2011, The Gadberry Group compiled the list of the 50 wealthiest zip codes in the United States, ranking Buckhead's western zip code (30327) as the second wealthiest zip code in the South (behind Palm Beach's 33480) and the second wealthiest zip code east of California and south of Virginia. The same group reported the average household income at $280,631, with an average household net worth of $1,353,189. These 2011 figures are up from a similar 2005 study that pegged Buckhead as the wealthiest community in the South and the only settlement south of the Washington D.C. suburb of Great Falls, and east of the Phoenix suburb of Paradise Valley to be among the 50 wealthiest communities in the country. However, according to Forbes magazine, (30327) is the ninth-wealthiest zip code in the nation, with a household income in excess of $341,000. The Robb Report magazine has consistently ranked Buckhead one of the nation's "10 Top Affluent Communities" due to "the most beautiful mansions, best shopping, and finest restaurants in the Southeastern United States". Due to its wealth, Buckhead is sometimes promoted as the "Beverly Hills of the East" or "Beverly Hills of the South" in reference to Beverly Hills, California, an area to which it is often compared. 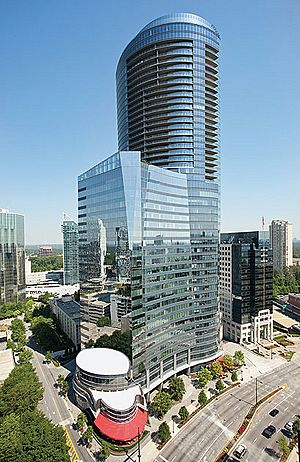 The Sovereign Building completed in late 2008, is Buckhead's tallest building.

While much of west and north Buckhead is preserved as single-family homes in forested settings, the Peachtree Road corridor has become a major focus of high-rise construction. The first 400-foot (121 m) office tower, Tower Place, opened in 1974. Park Place, built in 1986, was the first 400+ foot (121+ m) condominium building. 1986 also saw the completion of the 425-foot (129 m), 34-story Atlanta Plaza, then Buckhead's tallest and largest building. In 2000, Park Avenue Condominiums pushed the record to 486 feet (148 m). Since that time, a wave of development has followed. The 660-foot (201 m) Sovereign and 580-foot (177 m) Mandarin Oriental were completed in 2008. Many luxury high-rise apartment buildings have been built recently, including the 26-story Post Alexander High Rise in 2014 and the 26-story Skyhouse Buckhead in 2014. Today, Buckhead has over 50 high-rise buildings, almost one-third of the city's total. 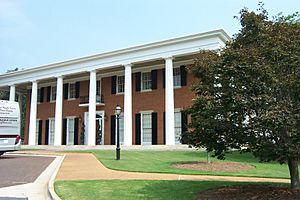 The main north-south street of Buckhead is Peachtree Road, which extends south into the heart of the city as Peachtree Street, Atlanta's main street. This name change is significant in that it defines a border between Buckhead and Midtown. The main east-west street is Paces Ferry Road, named for a former ferry that used to cross the Chattahoochee River. Hardy Pace, one of Atlanta's founders, operated the ferry and owned much of what is now Buckhead. In addition to Peachtree and West Paces Ferry Roads, other arterial roads include Piedmont Road (Georgia 237), Roswell Road (Georgia State Route 9), and Northside Parkway.

In the early 1990s, after a bitter fight against GDOT by residents, Buckhead was split in two by Georgia 400, a tolled extension of a freeway connecting I-285 to I-85. However, MARTA's new north line was put in the highway's median, providing mass transit for Buckhead and Sandy Springs residents.

MARTA operates three stations in Buckhead, the southernmost being Lindbergh Center. Just north of there, the original northeast (orange) and later north (red) lines split, with Lenox at the southwest corner of the Lenox Square parking lot, and Buckhead on the west side of the malls where Peachtree crosses 400. A free circulator bus called "the buc" (Buckhead Uptown Connection) stops at all three stations. The proposed extension of the Atlanta Streetcar to Buckhead (nicknamed the "Peachtree Streetcar" because it would run along Peachtree Street in Downtown Atlanta and Peachtree Road in Buckhead) would provide street-level service with frequent stops all the way to downtown Atlanta, complementing the existing subway-type MARTA train service for the area.

All content from Kiddle encyclopedia articles (including the article images and facts) can be freely used under Attribution-ShareAlike license, unless stated otherwise. Cite this article:
Buckhead Facts for Kids. Kiddle Encyclopedia.