Kids Encyclopedia Facts
This page is about the BeltLine transportation project in Atlanta. For the circumferential highway known as the Perimeter, see Interstate 285 (Georgia). For the rail trail in Toronto, see Beltline Trail. For other uses, see Beltline.

The Atlanta BeltLine (also Beltline or Belt Line) is a former railway corridor around the core of Atlanta, Georgia, under development in stages as a multi-use trail. Some portions are already complete, while others are still in a rough state but hikeable. Using existing rail track easements, the BeltLine is designed to improve transportation, add green space, and promote redevelopment. There are longer-term visions for streetcar or light-rail lines along all or part of the corridor.

The streetcar component of the BeltLine plan was originally developed in 1999 as a master's thesis by Georgia Tech student Ryan Gravel. It links city parks and neighborhoods, but has also been used for temporary art installations. In 2013, the project received a federal grant of $18 million to develop the southwest corridor. In September 2019 the James M. Cox Foundation gave $6 Million to the PATH Foundation which will connect the Silver Comet Trail to The Atlanta Beltline which is expected to be completed by 2022. Upon completion, the total combined interconnected trail distance around Atlanta for The Atlanta BeltLine and Silver Comet Trail will be the longest paved trail surface in the U.S. totaling about 300 Miles (480km).

Main page: Timeline of the BeltLine

The first development of the BeltLine area began when the Atlanta & West Point Railroad began building a 5-mile (8 km) connecting rail line from its northern terminus at Oakland City to Hulsey Yard on the Georgia Railroad (essentially the southeast quarter of the completed BeltLine). The surveys were done and initial construction had begun when the courts ordered a halt in May 1899 as that work did not fall under the A&WP's charter.

In September 1899, a more ambitious charter for an Atlanta Belt Railway Company was announced that would circle the entire city connecting all rail lines so that freight car transfers could occur on the outskirts rather than downtown. The initial charter was to encompass no more than 30 miles (48 km) and named only perimeter points Howell and Clifton Stations. Since Clifton was in DeKalb County, both it and Fulton were named in the charter. After surveys of the route and right of way acquisitions, the DeKalb portion was ditched leaving the entire route in Fulton County. The entire line was completed by 1902.

The idea to turn the rail corridors into a ring of trails and parks originated in a 1999 master's degree thesis by Georgia Tech student Ryan Gravel, who founded the non-profit Friends of the Belt Line and works for Perkins+Will. Frustrated with the lack of transportation alternatives in Atlanta, Gravel and two of his colleagues, Mark Arnold and Sarah Edgens, summarized his thesis in 2000 and mailed copies to two dozen influential Atlantans. Cathy Woolard, then the city council representative for district six, was an early supporter of the concept. Woolard, Gravel, Arnold, and Edgens spent the next several months promoting the idea of the BeltLine to neighborhood groups, the PATH foundation, and Atlanta business leaders. Supported by Atlanta mayor Shirley Franklin, previous city council president Cathy Woolard, and many others in Atlanta's large business community, the idea grew rapidly during 2003 and 2004.

The railroad tracks and rights-of-way are owned mostly by CSX Transportation, Norfolk Southern, and the Georgia Department of Transportation. Developer Wayne Mason had purchased most of the NS portion, in anticipation of the BeltLine, but later sold it after conflict with the city.

The total length will be 22 miles (35 km), running about 3 miles (5 km) on either side of Atlanta's elongated central business district. It is planned to include a neighborhood-serving transit system (likely streetcars); footpaths for non-motorized traffic, including bicycling, rollerskating, and walking; and the redevelopment of some 2,544 acres (1,030 ha). The project (although not the funding for it) is included in the 25-year Mobility 2030 plan of the Atlanta Regional Commission for improving transit. As of 2014, the project's planners estimated they had 17 years left before the project would be completed, and no light-rail lines had yet been built. 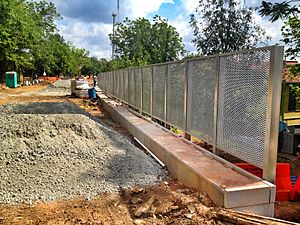 BeltLine Eastside Trail under construction in the Old Fourth Ward, May 2012.

In September 2019 the James M. Cox Foundation gave $6 Million to the PATH Foundation which will connect the Silver Comet Trail to The Atlanta Beltline which is expected to be completed by 2022. Upon completion, the total combined interconnected trail distance around Atlanta for The Atlanta BeltLine and Silver Comet Trail will be the longest paved trail surface in the U.S. totaling about 300 miles (480 km). 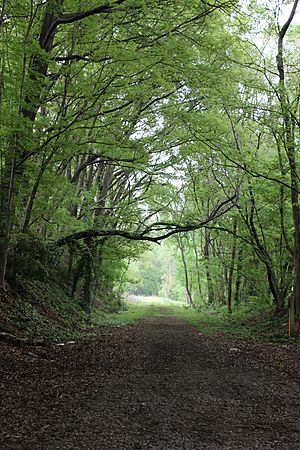 The Westside BeltLine is a yet unpaved mixed-use green space in the Atlanta Metropolitan region. Established on the site of a former railroad line, the Westside BeltLine links the neighborhoods of West End, Adair Park, Washington Park, and Vine City.

The BeltLine will feature a continuous path encircling the central part of the city, generally following the old railroad right of way, but departing from it in several areas along the northwest portion of the route. In total, 33 miles (53 km) of multi-use paths are to be built, including spur trails connecting to neighborhoods. The BeltLine connects 45 diverse neighborhoods, some of which are Atlanta's most underserved parks. The PATH Foundation, which has many years of experience building such trails in the Atlanta area, is a partner in the development of this portion of the system.

As of mid-2017, completed trails include:

as well as interim hiking trails.

The Eastside Trail stretches from Piedmont Park in the north to Inman Park and Old Fourth Ward in the south, passing by the greatest concentration of industrial architecture in Atlanta adapted for residential reuse and as offices, retail, dining and shopping, the most notable example being Ponce City Market.

The first trail to be built on the BeltLine, the 2.4-mile West End Trail, was opened in 2008. It edges the neighborhood of the same name as well as serving Mozley Park and Westview. The trail stretches from White Street to Westview Cemetery and is built next to city streets. The Westside Trail, opened in September 2017, is three miles in length and is in the old railroad corridor. The Westside Trail stretches from Washington Park and the MARTA Green (East-West) Line in the north, past West End, ending at University Avenue in Adair Park. Along parts of the Westside Trail, the West End trail runs parallel and just outside of the old rail corridor.

The first section of the Northside Trail opened in 2010 and forms part of a larger network of trails at the south end of Buckhead, the northern third of the city, in and around Tanyard Creek Park in the Collier Hills area. An additional stretch, the Northside Spur Trail was opened 2015.

The trail will eventually connect to the Peachtree Creek Greenway and the PATH400 once complete.

The Southwest Connector Spur Trail stretches through woods, starting at the Lionel Hampton Trail, ending at Westwood Avenue serving the Beecher Hills and Westwood Terrace neighborhoods. The existing 1.15-mile trail is set to be part of an eventual 4.5-mile trail. 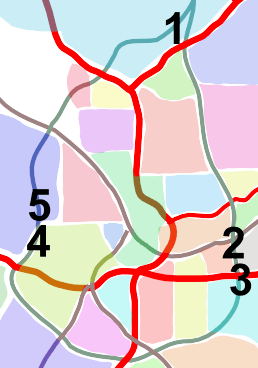 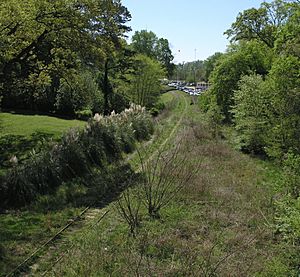 An as-yet undeveloped stretch of the BeltLine behind Piedmont Park.

There are five gaps along the BeltLine where rights of way do not connect and thus create larger challenges to the project.

In September 2019 the James M. Cox Foundation gave $6 Million to the PATH Foundation which will connect the Silver Comet Trail to The Atlanta Beltline which is expected to be completed by 2022. Upon completion, the total combined interconnected trail distance around Atlanta for The Atlanta BeltLine and Silver Comet Trail will be the longest paved trail surface in the U.S. totaling about 300 Miles (480km).

In 2004, The Trust for Public Land commissioned Alexander Garvin to produce a report, The BeltLine Emerald Necklace: Atlanta's New Public Realm. This report showed the public a vision of transformation for the BeltLine. The BeltLine plan calls for the creation of a series of parks throughout the city creating what the working plan, The Beltline Emerald Necklace, calls the 13 "Beltline Jewels"; they would be connected by the trail and transit components of the plan. In total, the BeltLine will create or rejuvenate 1,300 acres (530 ha) of greenspace. The plan would expand these existing parks:

It would also create these new parks:

The Trust for Public Land, a national non-profit, partnered with the Atlanta BeltLine project and acquired 33 properties, totaling 1,300 acres. These properties will increase Atlanta's green space by nearly 40%.

The original focus of the BeltLine thesis was on establishing a 22-mile (35 km) light rail loop around the central portion of the city. The vision has expanded to include trails, parks and greenspace, streetscapes, public art, affordable housing, economic development, environmental sustainability, and historic preservation. In Summer 2012, there was a referendum on whether a 1-cent sales tax (SPLOST) should be implemented to fund traffic and road improvements. If approved, the tax would have funded several streetcar routes along portions of the BeltLine trail and connections to MARTA stations and the Downtown Loop streetcar. The sales tax did not pass.

The 2018 MARTA spending plan calls for Atlanta Streetcar tracks to be extended to run on two separate sections of the BeltLine. Northeast and southwestern sections of 2-track light rail will be installed in the right of way under the plan.

In late January 2009, GDOT and Amtrak made an unannounced and last-minute filing with the Surface Transportation Board that would effectively block the northeast part of the BeltLine, instead taking it for future intercity rail. However, this conflict was later resolved.

"Art on the Atlanta BeltLine" is the city of Atlanta's largest temporary public art exhibition that showcases the work of hundreds of visual artists, performers, and musicians along nine miles (14 km) of the BeltLine corridor. The first exhibition was in 2010. There also is a considerable amount of spontaneous unofficial street art to be found throughout the Beltline ranging from murals to sculptures. 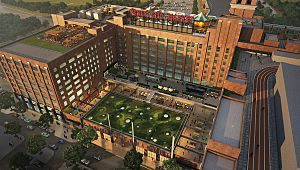 Many former industrial buildings alongside the BeltLine, particularly the Eastside Trail, have been repurposed for residential and retail use, such as Amsterdam Walk, Ponce City Market, Ford Factory Lofts, the Krog Street Market, the Telephone Factory Lofts, and the DuPre Excelsior Mill and the Pencil Factory and N. Highland Steel in Inman Park Village.

All content from Kiddle encyclopedia articles (including the article images and facts) can be freely used under Attribution-ShareAlike license, unless stated otherwise. Cite this article:
BeltLine Facts for Kids. Kiddle Encyclopedia.