Westside Park at Bellwood Quarry is an under construction park in the City of Atlanta located on the site of the former Bellwood Quarry. The park is between Johnson Road and Donald Lee Hollowell Parkway and between the neighborhoods of Bankhead and West Midtown and immediately to the northeast of the neighborhood of Grove Park, of which a large portion of the park falls within the Grove Park boundaries. Westside Park at Bellwood Quarry will be a major green space project of the Atlanta BeltLine master plan. The park will have trail connectivity to the BeltLine, as well as the Proctor Creek Greenway Trail (Phase 1). On August 27, 2019, Westside Park at Bellwood Quarry received a major boost with the announcement that the Arthur M. Blank Family Foundation has awarded a $17.5 million grant for the project. The Blank grant will accelerate the development of parks and trails along the 22-mile circular corridor – especially on the Westside. 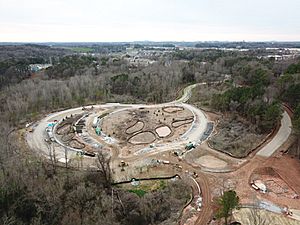 A portion of Phase 1 of Atlanta's Westside Park as seen in February, 2020. Facing North. 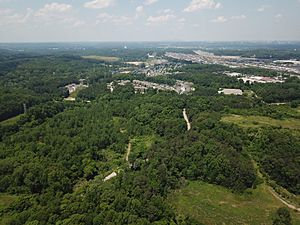 May 2018, dense woods cover the area of what is slated to be developed during Phase 1 of Atlanta's Westside Park. Facing North. 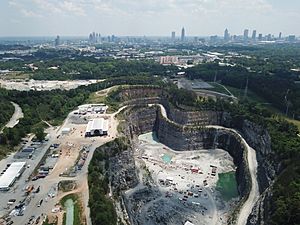 Bellwood Quarry, as seen in 2018 with construction of the reservoir and related infrastructure. Facing East.

The land, which had been owned by Fulton County, was in a long-term lease to Vulcan Materials. On December 10, 2005, Atlanta Mayor Shirley Franklin announced a plan to acquire the lease and the land in order to create a 351-acre (1.42 km2) park with a 45-acre (180,000 m2) lake which would also serve as a drinking water reservoir. The plan is a portion of the extensive BeltLine project to construct a ring of parks, trails, and transit surrounding the core of Atlanta. The proposed Westside Reservoir Park is nearly twice the size of Atlanta's premiere greenspace, Piedmont Park. 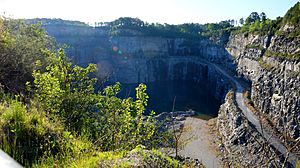 Bellwood Quarry, as seen from the observation deck on the northwest side 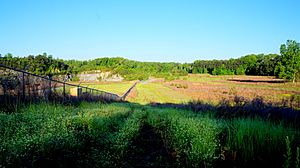 Looking west, the border to the Quarry itself is to the left of a field 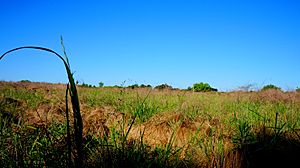 Another large field farther north of the Quarry

On December 29, 2017, outgoing mayor Kasim Reed unveiled plans for phase one of the park's construction. The first phase will take about 24 months to complete. The cost of the first phase, which has already been approved and funded by the Atlanta City Council, will be approximately $26.5 million. Phase one includes a gateway to the park, a "grand overlook" of both the quarry and the Atlanta skyline, and pedestrian connections to the Proctor Creek Greenway. The following year, Mark Teixeira and a development team announced plans to build a mixed-use development, Quarry Yards, adjacent to the park.

On September 6, 2018 the official groundbreaking took place for Westside Reservoir Park. Atlanta Mayor Keisha Lance Bottoms and others hailed the park as a new attraction for the city that will also become an economic engine for long-forgotten neighborhoods west of Georgia Tech. The promised 280-acre park has been a driver for new development on the city's Westside, a historically industrial area surrounded by generally lower income neighborhoods, that has seen a rush of real estate speculation since the Great Recession. The rise in development has stoked fears by residents of potential displacement from rising prices, particularly in the Grove Park neighborhood.

The $26.5 million first phase of the park will include a new gateway entrance to the property along Johnson Road as well as new lighting, and pedestrian and bicycle improvements. Phase 1 of the new park is scheduled to open in the spring of 2020.

The former granite quarry, which closed in 2007, was a popular hang-out spot for local teens. The site was used as a location for the filming of the AMC's series The Walking Dead in summer 2010. It was also used as a filming location in season four episode 14 of The Vampire Diaries, a scene in Mockingjay Part 1, as well as the final scene of The Fundamentals of Caring. Most recently, (2016) it serves a significant role and is featured prominently in several episodes of the highly acclaimed Netflix series Stranger Things. During construction of the reservoir and the park, the area is closed to the public and trespassers will be arrested. A five mile tunnel was dug to access water and the reservoir began filling in April 2020.

All content from Kiddle encyclopedia articles (including the article images and facts) can be freely used under Attribution-ShareAlike license, unless stated otherwise. Cite this article:
Westside Reservoir Park Facts for Kids. Kiddle Encyclopedia.