Phipps Plaza is an upscale shopping mall located in the Buckhead district of Atlanta, Georgia. Owned by Simon Property Group, the retail center is located at the intersection of Peachtree Road (Georgia SR 141) & Lenox Road (Georgia SR 141 Connector) and sits adjacent to its sister-mall Lenox Square in the heart of Buckhead's commercial center. The mall is named after its original developer, Ogden Phipps.

Phipps Plaza is known for its interior decor, which consists of mahogany walls, marble floors, glass elevators, chandeliers, and a massive, carpeted staircase. The anchor stores are Saks Fifth Avenue and Nordstrom. It is adjacent to the Phipps Tower office building.

In 1969, Phipps Plaza opened as the first multi-level mall in Atlanta, aiming to become the South's leading shopping destination. The mall originally opened with two levels. Purchased by financier Ogden Phipps in 1966 for less than $600,000, the development was sold in 1992 to Simon Properties for $488 million. That year, in development as part of a $140 million renovation and expansion, Phipps added a third anchor, Birmingham, Alabama based Parisian, owned by the parent company of Saks Fifth Avenue, to its original anchors Saks Fifth Avenue and Lord & Taylor. This was their second Atlanta area location (their first was at Town Center at Cobb which also opened in 1992) and their flagship. This was followed by the openings of other area stores at Gwinnett Place Mall in 1993 and Northlake Mall in 1994, respectively. The expansion would also add a 14 screen AMC theatre, a new food court, new elevators, and the addition of one new level. Phipps Plaza remains Atlanta's only Saks Fifth Avenue venue. Lord & Taylor would close their Phipps Plaza location in 2004 citing an overly competitive regional marketplace. The store served as one of the original anchors for 35 years. The space was eventually completely renovated to make way for Atlanta's third Nordstrom, which opened in March 2005. On August 2, 2006, it was announced that Belk was acquiring the Parisian chain of department stores, with the store being converted to the Belk name in the fall of 2007. In 2010 the food court was renovated into a Legoland Discovery Center. 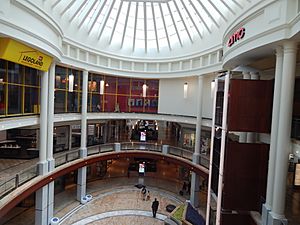 Phipps Plaza mostly has mostly upscale stores not found within hundreds of miles of Atlanta such as Tiffany & Co., Cole Haan, Gucci, and Bally as well as several high end restaurants.

All content from Kiddle encyclopedia articles (including the article images and facts) can be freely used under Attribution-ShareAlike license, unless stated otherwise. Cite this article:
Phipps Plaza Facts for Kids. Kiddle Encyclopedia.