Milledgeville is a city in and the county seat of Baldwin County in the U.S. state of Georgia. It is northeast of Macon and bordered on the east by the Oconee River. The rapid current of the river here made this an attractive location to build a city. It was the capital of Georgia from 1804 to 1868, including during the American Civil War. Milledgeville was preceded as the capital city by Louisville and was succeeded by Atlanta, the current capital. Today U.S. Highway 441 connects Milledgeville to Madison, Athens, and Dublin.

Milledgeville is along the route of the Fall Line Freeway, which is under construction to link Milledgeville with Augusta, Macon, Columbus, and other Fall Line cities. They have long histories from the colonial era of Georgia.

Milledgeville, named after Georgia governor John Milledge (in office 1802–1806), was founded by European Americans at the start of the 19th century as the new centrally located capital of the state of Georgia. It served as the state capital from 1804 to 1868.

In 1803 an act of the Georgia legislature called for the establishment and survey of a town to be named in honor of the current governor, John Milledge. The Treaty of Fort Wilkinson (1802), in which the Creek people, hard pressed by debts to white traders, agreed to cede part of their ancient land, had recently made available territory immediately west of the Oconee River. The white population of Georgia continued to press west and south in search of new farmland, and the town of Milledgeville, carved out of the Oconee wilderness, helped accommodate their needs.

In December 1804 the state legislature declared Milledgeville the new capital of Georgia. The new planned town, modeled after Savannah and Washington, D.C., stood on the edge of the frontier, where the Upper Coastal Plain gives rise to the foothills and plateau of the Piedmont. The area was surveyed, and a town plat of 500 acres (2.0 km2) was divided into 84 4-acre (16,000 m2) squares. The survey also included four public squares of 20 acres (81,000 m2) each.

In 1807 fifteen wagons, escorted by troops, left Louisville, Georgia, the former capital, carrying the treasury and public records of the state. The new statehouse, though unfinished, managed to accommodate the legislators. Over the next thirty years the Capitol building was enlarged with a north and south wing. Its pointed arched windows and battlements marked it as the United States' first public building in the Gothic revival style.

Governor Jared Irwin (re-elected in 1806) soon moved into a handsome two-story frame structure known as Government House, on the corner of Clarke and Greene streets. The new capital was a rather crude frontier community with simple clapboard houses, a multitude of inns and taverns, law offices, bordellos, and hostelries. The town attracted several blacksmiths, apothecaries, dry-goods merchants, and booksellers. Travelers to the town generally remained unimpressed, noting the ill-kept and overcrowded inns, the gambling, the dueling, and the bitter political feuds.

Life in the antebellum capital 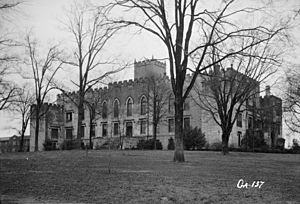 After 1815 Milledgeville became increasingly prosperous and more respectable. Wealth and power gravitated toward the capital, and the surrounding countryside became caught up in the middle of a lucrative cotton boom as large plantations were developed, based on slave labor. Cotton bales regularly were set up to line the streets, waiting for shipping downriver to Darien.

Public-spirited citizens such as Tomlinson Fort (mayor of Milledgeville, 1847–1848) promoted better newspapers, learning academies, and banks. In 1837-1842 the Georgia Lunatic Asylum (later the Central State Hospital) was built here. Oglethorpe University, where the poet Sidney Lanier was later educated, opened its doors in 1838. (The college, forced to close in 1862, was rechartered in 1913, with its campus in Atlanta.)

The cotton boom in this upland area significantly increased the demand for slave labor; planters bought slaves transported from the Upper South in the domestic slave trade. By 1828 the town claimed 1,599 inhabitants: 789 free whites, 27 free blacks, and 783 African-American slaves. The town market, where slave auctions took place, was located on Capital Square, next to the Presbyterian church. Skilled black carpenters, masons, and laborers constructed most of the handsome antebellum structures in Milledgeville.

Two events epitomized Milledgeville's status as the political and social center of Georgia in this period:

American Civil War and its aftermath 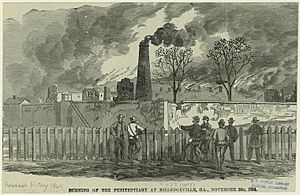 Burning of the penitentiary at Milledgeville, GA by the Union Army (November 23, 1864)

On January 19, 1861, Georgia convention delegates passed the Ordinance of Secession, and on February 4, 1861, the "Republic of Georgia" joined the Confederate States of America. In the closing months of the war, in November 1864 Union general William T. Sherman and 30,000 Union troops marched into Milledgeville during his March to the Sea. Before leaving a couple of days later, they had poured sorghum and molasses down the pipes of the organ at St. Stephen's Episcopal Church. But the Union forces spared most of the antebellum buildings there, as Sherman had relatives in the city.

In 1868, during Reconstruction, the state legislature moved the capital to Atlanta—a city emerging as the symbol of the New South as surely as Milledgeville symbolized the Old South.

Milledgeville struggled to survive as a city after losing the business of the capital. The energetic efforts of local leaders established the Middle Georgia Military and Agricultural College (later Georgia Military College) in 1879 on Statehouse Square. Where the crumbling remains of the old penitentiary stood, Georgia Normal and Industrial College (later Georgia College & State University) was founded in 1889. In part because of these institutions, as well as Central State Hospital, Milledgeville developed as a less provincial town than many of its neighbors.

In the 1950s the Georgia Power Company completed a dam at Furman Shoals on the Oconee River, about 5 miles (8 km) north of town, creating a huge reservoir called Lake Sinclair. The lake community became an increasingly important part of the town's social and economic identity.

In the 1980s and 1990s Milledgeville began to capitalize on its heritage by revitalizing the downtown and historic district. It encouraged restoration of historic buildings and an urban design scheme on Main Street to emphasize its character.

By 2000 the population of Milledgeville and Baldwin County combined had grown to 44,700. Community leaders have made concerted efforts to create a more diversified economic base, striving to wean the old capital from its dependence on government institutions such as Central State Hospital and state prisons. The state has recently closed some prisons and reduced jobs at Central State, due to tightening state budgets.

Milledgeville is located on the Atlantic Seaboard fall line of the United States. The Oconee River flows a half mile east of downtown on its way south to the Altamaha River and then south to the Atlantic Ocean. Lake Sinclair, a man-made lake, is about 5 miles (8 km) northeast of Milledgeville on the border of Baldwin, Putnam and Hancock counties.

Milledgeville is composed of two main districts: a heavily commercialized area along the highway known to locals simply as "441," extending from a few blocks north of Georgia College & State University to 4 miles (6 km) north of Milledgeville, and the "Downtown" area, encompassing the college, buildings housing city government agencies, various bars and restaurants. This historic area was laid out in 1803, with streets named after other counties in Georgia.

The school system building facilities were revamped during the 1990s and first decade of the 21st century, with all new buildings, including a new Board of Education office. This required relocation and merging of older schools. The concept of a middle school was introduced, whereas previously 6th through 9th grades were housed in separate schools. Closed older schools include:

All content from Kiddle encyclopedia articles (including the article images and facts) can be freely used under Attribution-ShareAlike license, unless stated otherwise. Cite this article:
Milledgeville, Georgia Facts for Kids. Kiddle Encyclopedia.