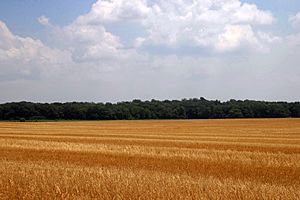 Wheat field near Centreville on the Eastern Shore of Maryland, with flat terrain typical of the Atlantic coastal plain

The lands adjacent to the Atlantic coastline are made up of sandy beaches, marshlands, bays, and barrier islands. This major division consists of the Continental Shelf and Coastal Plain physiographic provinces. It is the flattest of the U.S. physiographic divisions and stretches over 2,200 miles (3,500 km) in length from Cape Cod to the Mexican border and southward an additional 1,000 miles (1,600 km) to the Yucatán Peninsula. The central and southern Atlantic Coast is characterized by barrier and drowned valley coasts. The coastal Atlantic plain features nearly continuous barriers interrupted by inlets, large embayments with drowned river valleys, and extensive wetlands and marshes. The Atlantic plain slopes gently seaward from the inland highlands in a series of terraces. This gentle slope continues far into the Atlantic and Gulf of Mexico, forming the continental shelf. The relief at the land-sea interface is so low that the boundary between them is often blurry and indistinct, especially along stretches of the Louisiana bayous and the Florida Everglades. 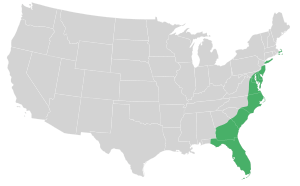 This province consists of the following physiographic sections: the Embayed, Sea Island, Floridian, East Gulf Coastal Plain, Mississippi Alluvial Plain, and the West Gulf Coastal Plain. The rocks consist for the most part of layers of sand and clay which are not yet hardened into sandstone and shale. The coastal Atlantic plain features nearly continuous barriers interrupted by inlets, large embayments with drowned river valleys, and extensive wetlands and marshes. The Atlantic plain slopes gently seaward from the inland highlands in a series of terraces. The surface is mainly flat, with a very great population. The increase in population affects the wildlife immensely.

It extends 2,200 miles (3,500 km) from the New York Bight southward to a Georgia/Florida section of the Eastern Continental Divide, which demarcates the plain from the ACF River Basin in the Gulf Coastal Plain to the west. The province is bordered on the west by the Atlantic Seaboard Fall Line and the Piedmont plateau, to the east by the Atlantic Ocean, and to the south by the Floridian province. The Outer Lands archipelagic region forms the insular northeasternmost extension of the Atlantic coastal plain.

The province's average elevation is less than 900 meters above sea level and extends some 50 to 100 kilometers inland from the ocean. The coastal plain is normally wet, including many rivers, marsh, and swampland. It is composed primarily of sedimentary rock and unlithified sediments and is primarily used for agriculture. The Atlantic Coastal Plain includes the Carolina Sandhills region as well as the Embayed and Sea Island physiographic provinces. The Atlantic Coastal Plain is sometimes subdivided into northern and southern regions, specifically the Mid-Atlantic and South Atlantic coastal plains.

The Atlantic Plain is generally gently dipping undeformed Mesozoic and Cenozoic sediments, with the sedimentary wedge thickening toward the sea, reaching a maximum thickness of about 3 kilometers (10,000 ft) in the vicinity of Cape Hatteras, North Carolina.

All content from Kiddle encyclopedia articles (including the article images and facts) can be freely used under Attribution-ShareAlike license, unless stated otherwise. Cite this article:
Atlantic coastal plain Facts for Kids. Kiddle Encyclopedia.