Louisville is a city in Jefferson County, Georgia, United States. It was an early capital of Georgia and is the county seat of Jefferson County. It is located southwest of Augusta on the Ogeechee River, and its population was 2,712 at the 2000 census. Though the name is of French origin, it is pronounced "Lewis-ville."

Louisville was laid out in 1786 as the prospective state capital. Georgia ratified the United States Constitution in 1788. Savannah had served as the colonial capital; but it was considered too far from the center of the growing state. Louisville was named for Louis XVI, who was still the King of France and had aided the Continentals during the successful American Revolutionary War. Development of the city began later, and its state government buildings were completed in 1795.

The city of Louisville served as the state capital of Georgia from 1796 to 1806. The Jefferson County courthouse, built in 1904, stands on the site of Georgia's first permanent capitol building. 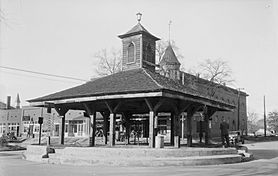 Louisville's historic market house still stands in the center of downtown. The original market had sections for everything from farm produce and household goods to slaves. The Old Market is listed on the National Register of Historic Places. The market square became the hub of the transportation routes which centered on Louisville while the town was the state's capital.

As a small city and county seat, the city now has few major businesses and industries. Queensborough National Bank and Trust Company was founded in 1902 and is currently headquartered in Louisville, on U.S. Highway 1.

A marker dedicated to the Yazoo land scandal is located in front of the county courthouse.

According to the United States Census Bureau, the city has a total area of about 3.7 square miles (9.5 km²).

There were 994 households out of which 33.4% had children under the age of 18 living with them, 35.8% were married couples living together, 27.4% had a female householder with no husband present, and 33.1% were non-families. 31.4% of all households were made up of individuals and 16.1% had someone living alone who was 65 years of age or older. The average household size was 2.56 and the average family size was 3.22.

All content from Kiddle encyclopedia articles (including the article images and facts) can be freely used under Attribution-ShareAlike license, unless stated otherwise. Cite this article:
Louisville, Georgia Facts for Kids. Kiddle Encyclopedia.