In early 2008 a typical day saw seven departures to Atlanta, GA on Bombardier CRJ-200 regional jets and ATR 72 turboprop aircraft by Delta Connection carriers, US Airways Express had seven departures to Charlotte, NC with turboprop Bombardier Dash 8-300s and Bombardier CRJ-200s. As of mid-2009, Delta Air Lines regional carrier Atlantic Southeast Airlines (ASA) no longer operates the ATR-72 turboprop aircraft, and all ExpressJet flights into and out of Augusta are 50-seat CRJ-200 regional jets. US Airways Express served the airport with Dash 8-300 turboprops and CRJ-200s. American Eagle ended flights to Augusta on January 31, 2012, but it returned to Augusta once parent airline, American Airlines, overtook US Airways Express' parent US Airways in 2015.

Delta Air Lines has been flying to Augusta since May 2011 after an 11-year hiatus.

During the Masters golf tournament, traffic through Augusta soars. Airlines respond with more flights on larger equipment, including Delta Air Lines Boeing 737s and 757s. During 2009 Masters week, Embraer E-170s and CRJ-900s were common, but larger aircraft were also sent to Augusta. Delta does operate mainline aircraft to Augusta on a daily basis from their hub in nearby Atlanta.

The presence of Fort Gordon in Augusta results in periodic military charter flights using widebody aircraft such as McDonnell Douglas DC-10 and McDonnell Douglas MD-11 trijet aircraft, in the past operated by World Airways. 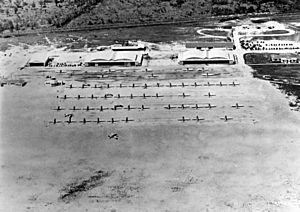 Training aircraft and hangars at Bush Field, about 1943 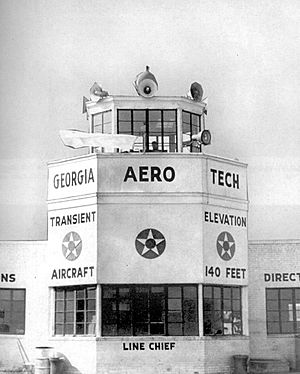 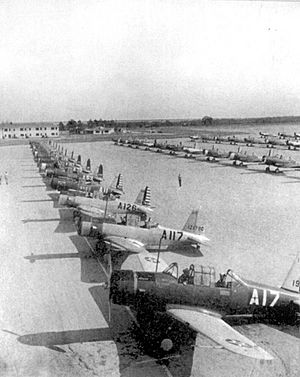 Vultee BT-13 and BT-15s at Bush Field, the "A" prefix on the fuselage were assigned to Bush Field aircraft

In 1941 the City of Augusta learned that the United States Army Air Corps was looking for a site to locate a basic Contract Pilot School. In March 1941 the president of the Chamber of Commerce contacted Harold S. Darr, who operated a primary flight school for the Air Corps in Albany, Georgia (Albany Army Airfield) to promote the idea to locate the new school in the Augusta area. With the Army's approval, Darr chose a 900-acre (3.6 km2) tract 7.5 miles (12.1 km) southeast of the City adjacent to the Savannah River. On 22 March 1941, Darr entered into an agreement with local officials to invest $500,000 in buying the acreage and building a school. Darr estimated that the school would employ 300 civilians with an annual payroll of $1.5 million, In turn, the City and Richmond County agreed to move a City-owned hangar from nearby Daniel Field, pave the aircraft parking ramp, pave a road in the area to create a runway, and provide convict labor with guards. The Air Corps set a very ambitious timetable by requiring that flight training begin no Later than 7 June 1941. Construction started on 1 April. The Air Corps and Darr did not go public with the project until 5 April, when an announcement appeared in the local newspaper.

Training began on 10 June, with flying cadets arriving from the Air Corps primary schools at Albany and Americus, Georgia, Tuscaloosa, Alabama, Camden, South Carolina, and Arcadia and Lakeland, Florida. The initial aircraft complement numbered 24 Vultee BT-13 Valiant and BT-15 aircraft. The ten-week course consisted of 70 hours of flight training and 150 hours of ground training. Harold Darr named the school Georgia Aero Tech; however, the Army designated it the 72nd Army Air Force Flight Training Detachment. The school was one of only three contract pilot schools conducting basic training. II. In addition to the main school at Agusta, the following auxiliary airfields were utilized:

Shortly after flight training commenced in June 1941, Don C. Bush, a civilian flight instructor lost his life in an aircraft crash. The airfield was named Bush Field in his memory.

In January 1942 the Defense Plant Corporation, a corporation entity of the Federal government, bought the school from Harold Darr. With the United States now in the war, the size of the classes increased, requiring an expansion of the school's facilities. Construction began on a ground training building in May and an additional barracks in June. The number of aircraft assigned to the school grew from 24 to around 100 BT-13s and BT-15s. Additional paved runways were eventually added.

During all 1943, the school operated at capacity with classes averaging around 160 students. By early 1944, training requirements began to decrease, and with the possibility at that time of closing nearby Camp Gordon, the Army suddenly had no use for the field. In September 1944, the Air Force closed the facility after training over 5,000 students.

The Reconstruction Finance Corporation used Bush Field until 1948 for the disposal and sale of surplus military aircraft. The surplus aircraft at Bush included almost every Army and Navy model, from primary trainers and drones to B-24s and large transports. Several were purchased by the upstart Flying Tiger Airline.

Bush Field became Augusta’s commercial airport on 1 July 1950 when the Federal Government transferred Bush Field to the City of Augusta and the airlines moved from Daniel Field to Bush Field. One of the airport’s most profitable initiatives occurred in 1955 when a transient terminal was opened to sell fuel and to provide service to visiting aircraft. To this day, the fueling operation continues as a major source of revenue for the airport, keeping it self-sufficient and profitable. No tax dollars or City funding has ever been needed to support the airport.

During the 1950s and 1960s passenger traffic grew. The old flight school barracks were renovated and leased to Continental Hotels. In 1961 an 8,000 ft (2,400 m) runway was completed. In 1964 Bush Field was the 135th-busiest airport in the nation. Jet service at the airport began in 1965. By the close of the 1960s the airport had doubled its baggage claim area and added a terminal, a tower, a lobby, a hotel, parking meters, and a second runway.

The 1970s were the airport’s industrial growth period. During the 1970s Capitol Aviation of Georgia established itself at the airport with a million-dollar-plus airplane service facility. The company, now known as Landmark Aviation, developed a jet engine repair facility, an avionics-navigation shop and a structural and aircraft systems repair shop. Landmark Aviation now employs roughly 220 people at the Augusta facility.

By the 1990s Bush Field tenants and visitors were contributing about $290 million in annual economic activity with nearly 2,200 jobs attributed to the airport. In 2000 Bush Field was renamed Augusta Regional Airport at Bush Field.

The self-sufficient airport, which has never used tax dollars, completed the first-ever "Master Plan" in 2002. The Master Plan serves as a road map for future economic growth and development at and around the airport.

Several former World War II buildings of Georgia Aero Tech remain at Bush Field. The former mess hall, administration building, and ground school buildings formed part of the airport's terminal building. The original swimming pool remained until 2008, but with a hotel built around it rather than cadet barracks. The hotel, pool and terminal buildings were demolished in conjunction with the building of an entirely new terminal building. The FAA currently occupies the former link trainer building. All the hangars are still in use — including the one moved from Daniel Field in 1941.

All content from Kiddle encyclopedia articles (including the article images and facts) can be freely used under Attribution-ShareAlike license, unless stated otherwise. Cite this article:
Augusta Regional Airport Facts for Kids. Kiddle Encyclopedia.