Kids Encyclopedia Facts
Not to be confused with Madison County, Georgia.

Madison is a city in Morgan County, Georgia, United States. It is part of the Atlanta-Athens-Clarke-Sandy Springs Combined Statistical Area. The population was 3,636 at the 2000 census. The city is the county seat of Morgan County and the site of the Morgan County Courthouse.

The Historic District of Madison is one of the largest in the state. Many of the nearly 100 antebellum homes have been carefully restored. Bonar Hall is one of the first of the grand-style homes built in Madison during the town's cotton-boom heyday between 1840-60.

Madison was named the #1 Small Town in America by Travel Holiday magazine. Budget Travel magazine voted Madison as one of the world's 16 most picturesque villages.

Madison is featured on Georgia's Antebellum Trail, and is designated as one of the state's Historic Heartland cities.

The nearest state park is Hard Labor Creek, located approximately 12 miles west of Madison. The park is known for its golf course, rustic camping and Hard Labor Creek Observatory, which is part of the Georgia State University Astronomy program.

Madison was described in an early 19th century issue of White's Statistics of Georgia as "the most cultured and aristocratic town on the stagecoach route from Charleston to New Orleans." In a 1849 edition of White's Statistics of Georgia, the following was written about Madison: "In point of intelligence, refinement, and hospitality, this town acknowledges no superior." On March 12, 1866, the settlement, named for 4th United States president, James Madison, was incorporated. 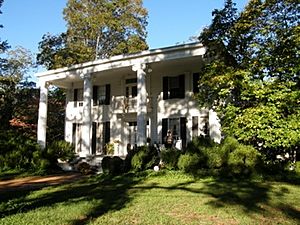 While many believe that Sherman spared the town because it was too beautiful to burn during his March to the Sea, the truth is that Madison was home to pro-Union Congressman (later Senator) Joshua Hill. Hill had ties with General William Tecumseh Sherman's brother in the House of Representatives, so his sparing the town was more political than appreciation of its beauty. In 1895 Madison was audited as having in successful operation an oil mill with a capital of $35,000, a soap factory, a fertilizer factory, four steam ginneries, a mammoth compress, two carriage factories, a furniture factory, a grist and flouringmill, a bottling works, a distillery with a capacity of 120 gallons a day, an ice factory with a capital of $10,500, a canning factory with a capital of $10,000, a bank with a capital of $75,000, surplus $12,000, and a number of small industries operated by individual enterprise. Madison has one of the largest historic districts in the state of Georgia, and tourists from all over the world come to marvel at the antebellum architecture of the homes.

There were 1,362 households out of which 32.0% had children under the age of 18 living with them, 44.0% were married couples living together, 22.6% had a female householder with no husband present, and 29.2% were non-families. 25.2% of all households were made up of individuals and 10.7% had someone living alone who was 65 years of age or older. The average household size was 2.61 and the average family size was 3.11.

Significant parts of the movie Goosebumps (starring Jack Black) were filmed in Madison and at the Madison-Morgan Cultural Center.

In Harry Turtledove's final Southern Victory novel Volume 11: In at the Death, Madison was the site of an important climax to the long running series.

I'll Fly Away (1991–93), an NBC series starring Sam Waterston as a southern lawyer at the dawn of the civil rights movement, was shot largely in historic Madison.

Portions of the TV series, October Road were filmed in Madison.

Portions of the TV series, The Originals', were filmed in Madison. The show was a spin-off of The Vampire Diaries.

Hissy Fit, a novel by Mary Kay Andrews, is set in Madison.

The main character of the webcomic, "Check, Please!" Eric "Bitty" Bittle is noted as being from Madison.

All content from Kiddle encyclopedia articles (including the article images and facts) can be freely used under Attribution-ShareAlike license, unless stated otherwise. Cite this article:
Madison, Georgia Facts for Kids. Kiddle Encyclopedia.