Kids Encyclopedia Facts
Not to be confused with Ocoee River. 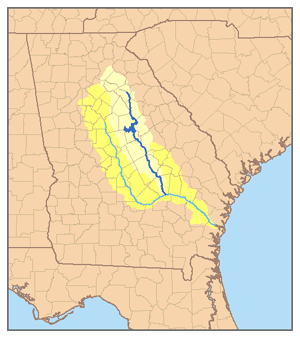 Map of the Altamaha River system with Oconee highlighted

The Oconee River is a 220-mile-long (350 km) river in the U.S. state of Georgia. Its origin is in Hall County and it terminates where it joins the Ocmulgee River to form the Altamaha River near Lumber City at the borders of Montgomery County, Wheeler County, and Jeff Davis County. South of Athens, two forks, known as the Middle Oconee River and North Oconee River, which flow for 55–65 miles (89–105 km) upstream respectively before converging to form the Oconee River. Milledgeville, the former capital city of Georgia, lies on the Oconee River.

The Oconee River passes through the Oconee National Forest into Lake Oconee, a man made lake, near the towns of Madison and Greensboro off Interstate 20. From Lake Oconee, the river travels to Lake Sinclair, another manmade lake in Milledgeville, the town founded on Georgia's Fall Line and former state capital. South of Milledgeville, the river flows unobstructed and later merges with the Ocmulgee River to form the Altamaha River. Along the river there are many sandbars and oxbow lakes while the forest bottomland swamp surrounding the Oconee extends for miles, creating a very remote setting.

The river's name derives from the Oconee, a Muskogean people of central Georgia. The Oconee lived in present-day Baldwin County, Georgia at a settlement known as Oconee Old Town, later moving to the Chattahoochee River in the early 18th century. The name exists in several variations, including Ocone, Oconi, Ocony, and Ekwoni.

The second biggest form of pollution in the river is fertilizer. Nitrogen in fertilizer in the form of nitrates or ammonia, measured in parts per million, is found in regularly collected samples. These forms of nitrogen stimulate abundant growth of algae in the water.

The third largest source of pollution is sedimentation, typically caused by construction and urbanization.

Crossings of the Oconee River include:

All content from Kiddle encyclopedia articles (including the article images and facts) can be freely used under Attribution-ShareAlike license, unless stated otherwise. Cite this article:
Oconee River Facts for Kids. Kiddle Encyclopedia.